Editors: Having children and participating in the workforce should not have to be be traded off. 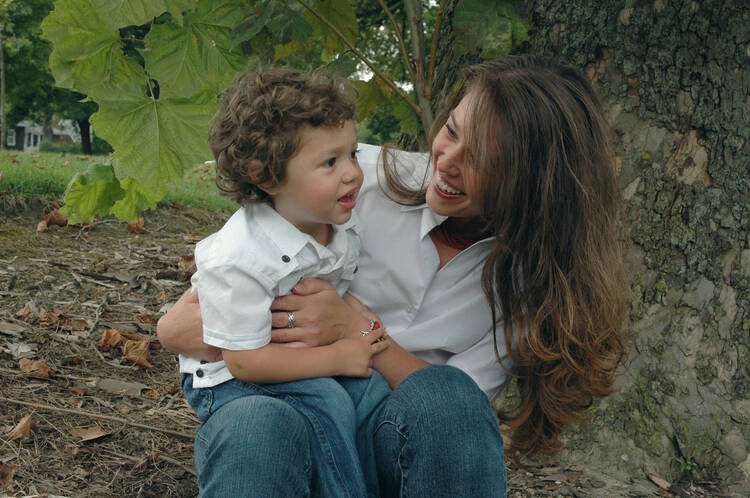 Speaking to a gathering of Christian business executives on Oct. 31, Pope Francis addressed the need for maternity leave and strikingly insisted that women should not be forced to choose between work and family. They “must be protected and helped in this dual task: the right to work and the right to motherhood.” He argued that the harmonization of work and family life is a way of recognizing that employees are the most valuable resource of a company.

While respecting employees’ duty to their families is certainly in line with the Catholic faith, the pope’s insight is not one that must come only or even primarily from the Gospel and the church’s social teaching. Netflix made news in August by allowing unlimited paid parental leave during the year after a child’s birth or adoption, matching their unlimited vacation and sick leave policies. Announcing the shift, they explained that it would provide employees “the flexibility and confidence to balance the needs of their growing families,” helping the company because “experience shows people perform better at work when they’re not worrying about home.”

Other tech firms have made similar moves, with Microsoft and Amazon also recently announcing improvements to their parental leave policies. But the recognition that more generous leave is important is not limited to Silicon Valley’s hyper-competitive talent market. In July the Navy tripled the length of its maternity leave in order to help recruit and retain women in the service.

These moves should of course be applauded, but they also raise the question of what befalls employees whose skills are not in great demand or who are not lucky enough to work for companies whose executives might hear the call to be “missionaries of the social Gospel.”

In fact, many whose work is directly connected to the Gospel do not benefit from the kind of policies Pope Francis called for, which is a scandal. Church employees—in parishes, schools, social service agencies and diocesan offices—are covered by a patchwork of different family leave arrangements. Since many of these Catholic organizations operate essentially as small nonprofits on shoestring budgets, they often find it difficult to offer adequate (or sometimes any) paid leave. The church should lead the way in making support for family through paid leave a baseline component of employment rather than a perk. National norms or a model policy from the bishops’ conference would help to set a standard for Catholic institutions to reach.

But private initiatives, even of the large scope possible for the U.S. Catholic Church, will not be enough. In the United States, uniquely among developed economies, new mothers (and fathers) are guaranteed nothing but 12 weeks of unpaid leave under the 1993 Family and Medical Leave Act, and then only if they work full time for a company with 50 or more employees. In 2013, the Bureau of Labor Statistics determined that just 11 percent of workers in private industry had access to paid family leave. Only three states—California, New Jersey and Rhode Island—require large employers to provide leave.

Opposition to a federal guarantee of paid family leave focuses on the imposition of a one-size-fits-all plan on employers and especially on the way this would affect smaller businesses less able to absorb the costs. Programs need to be designed to spread these burdens out structurally instead of simply mandating employers to pay for time off. Existing state-level programs, which are structured and funded similarly to temporary disability insurance, provide a good model. A report prepared for the Department of Labor in 2014, evaluating studies of the first decade of California’s program, found that this approach worked well, with positive effects on women’s employment and on children and families. Roughly 90 percent of employers reported no effect or positive effects on productivity and profitability.

The sometimes exaggerated concerns from the business community highlight the fact that more attention is given to the needs of employers than to “the right to work and the right to motherhood,” as Pope Francis put it. We cannot allow having children and participating in the workforce to be traded off against each other, as if workers’ becoming parents is some outside interruption to the normal course of their careers. This approach commodifies parenthood, valuing it at the cost of a worker’s lost wages and an employer’s lost productivity. It is an insult to the worker, who is reduced to the value of his or her job, and to the business that is reduced to extracting that value at the lowest possible cost.

The right answer, which is pro-woman, pro-family and pro-life, is to take family obligations off the market by supporting programs at both the state and federal level that offer a baseline guarantee of some time to welcome a newborn into the world without losing a paycheck.

The Editors
Show Comments (
4
)
Comments are automatically closed two weeks after an article's initial publication. See our comments policy for more.
Joseph J Dunn
6 years 9 months ago
Editors--- Progress might be considerably advanced if the DOL report that you cite could be easily found. Why not a link to it in the online edition, and a citation in the print edition? Most business leaders are constantly looking for ways to attract and retain good employees and improve productivity and profits. If the DOL report offers such opportunities, bring it forward. I suspect that there are some business leaders among your readership, and an even larger number of readers who could bring such research to the attention of business leaders.
John Walton
6 years 9 months ago
Whose legitimate work is not directly connected to the Gospel? Seems to be a lot of chest-thumping and self-righteousness in this statement: "In fact, many whose work is directly connected to the Gospel do not benefit from the kind of policies Pope Francis called for..."
Henry George
6 years 9 months ago
The ongoing scandal on how awful an employer the Catholic Church is: a) Low Pay b) Minimal Benefits c) Long working hours is something that should be addressed by the Bishops.
Mike Van Vranken
6 years 9 months ago
I agree that the Church should lead the way in making paid leave a baseline component of employment. But, as a Church, let's do just that. Why do we always want to make the government mandate something the Church should be doing? It's easy: Every Diocese should pay those Catholics who need to take off work to care for their families. Yes, you and I should be making those payments. Why would we expect a civil government to force a secular business to do it? Why don't we (the Church) do it? Jesus took two fish and fed everyone. Why don't we have the faith to do the same? Why don't we teach the Catholic faithful about giving? This is a Spiritual mandate from God. We are to do this for our brothers and sisters. Trying to make it a civil mandate won't work; it never has.