Faith Amid Flowers: Finding grace and new growth at Christmas 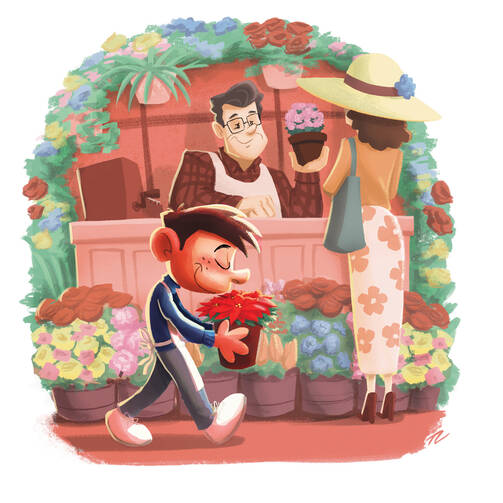 I am the son of a florist, so I was reared to accept that there are no tin flowers. And even the least of them are like rainbows or sunsets: worthwhile natural deities. I worked side-by-side with my dad for 25 of the 50 years he spent in his tiny flower shop in a tiny Philadelphia neighborhood called Paradise. When my pop was in his shop taking care of his customers, he was truly in paradise. He taught me that flowers speak to the verities of the heart and soul: honor, truth, love, prayer. For my entire life I have embraced the power of flowers, and they have helped guide me through both good and challenging times.

One Christmastide I was delivering poinsettias in my pop’s Ford panel truck when I noticed this girl waiting at a bus stop on Roosevelt Boulevard in the Northeast neighborhood of Philadelphia.

We had met as students on the campus of Temple University, had even gone out several times. She was a rare beauty, statuesque with long dark hair falling over her shoulders, and deep, dark brown eyes that lit up like polished pinewood. But we were polar opposites. She spent most of her time in the library studying French literature; I spent most of my time in the gym playing basketball. I was the starting point guard for Temple. We were as different as the Louvre and Madison Square Garden. I moved on.

I stopped the Ford panel, rolled down the passenger-side window and shouted, “Need a lift?”

After recognizing me, she said, “Sure,” and hopped in.

“Are you still playing basketball?” she asked, before noticing the cache of poinsettias in the back of the truck. “I love poinsettias,” she said. “Do you have any extras? I’ll buy one.”

“Yes, I’m still playing basketball,” I replied. “And no there aren’t any extra poinsettias.”

After dropping her off at her house, I returned to my pop’s shop, picked out a rich, rose-pink poinsettia and hung a “sold” sign on it. On the card, I wrote a poem. The next day when I was again delivering poinsettias in the Northeast area, I stopped at her house. I knocked on the door, and she opened it. Awkwardly, I said, “These are for you. Maybe we can get together.”

I did, and several days after Christmas we got together. She suggested we go for a walk. We stopped at a playground near her house. “Let’s shoot some hoops,” she said. (The way to my heart wasn’t through food but basketball.) And so we played a one-on-one game of basketball.

I won. I married her.

And for the 43 years we have been married, I have given her a poinsettia and a poem every Christmas.

In difficult times, when I need a source of strength to fill whatever holes within me need filling, I can call on those attributes of flowers: renewal, inspiration, peace—and spirituality. “Strike the rock, and the water will flow from it for the people to drink.” It is the same with flowers for me.

Four days before Christmas, in 1984, my pop the florist summoned me to the hospital where he was a patient. Looking me square in the eyes from his hospital bed, with that distinctly Irish Kennedyesque mug, a shell of a man from the once strapping football player he had been—muscular and sinewy, fast as a cheetah—he said, “Billy, make sure there are a lot of flowers at the viewing.” He died the next day.

Why wouldn’t he want plenty of flowers present at his passing? He was certain that flowers played a spiritual role in death, bringing a symbolic presence and meaning. Flowers bloom beyond tears, fears and no next years, symbolizing that death is not separation but transformation, not termination but transcendence. My pop forever preached that flowers help us to view death with the promise that life does not flicker out for good.

That is because he saw so often the comfort that his flowers brought to families and friends of loved ones who had died. Even science has now begun to take notice of the effects of flowers. A recent Rutgers University study revealed that in anxious, uncertain times, like death, flowers are a blissful and spiritual necessity. But then again, my pop didn’t need some scientific study to tell him that. He experienced it for 50 years in that tiny flower shop in Paradise.

So many times I heard people say to him, “Thank you, the flowers meant so much to us. They were a source of strength, peace and, most of all, faith.”

My father was buried on Christmas Eve. On the day of his viewing I made sure that the request he asked of me that night in the hospital was honored. There was a bounty of flowers circling his casket like a necklace. I arranged them. I am blessed with a usable past.

A huge spray of bulbous, white chrysanthemums spread the length of the casket; baskets of white gladioli, shooting out like spires, stood at the head and foot of the casket; a rosary made of red roses lay clutched in his hands, and 25 to 30 other baskets and sprays, one after another, framed the funeral parlor.

After everyone had gone, alone in the silence of the funeral parlor, I looked at my pop and all the flowers encircling him. They reminded me of that triumphant connection: Flowers were the other side of the silence, drawing life out of death.

B. G. Kelley is the author of The World I Feel, a book of poetry, and was a writer for the television film “Final Shot: The Hank Gathers Story” (1992). He is a regular contributor to The Philadelphia Inquirer.