Why do we still treat former prisoners like civil pariahs? 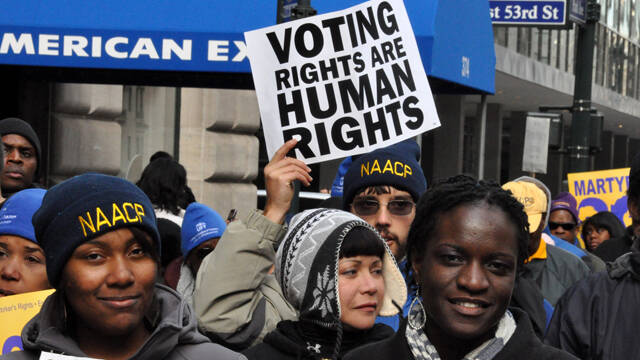 One of the more dispiriting debates that never ends in our political system is about who has the right to vote. One school of thought holds that if an American citizen does not have a driver’s license (with his or her current name on it), it is only fair to require that person to work a little harder, to fill out some extra forms and pay a few fees, in order to cast a vote. Voter identification laws are tied to concerns about voter impersonation fraud, a virtually nonexistent phenomenon, but the question of whether ex-felons should be allowed to vote has more to do with morality—and mercy.

Permanent voter disenfranchisement was part of what was called “civil death” in medieval times and in the early days of the United States, a condition that could also prevent criminals from ever again owning property or entering into contracts. In many states, the loss of the right to vote persisted long after the other aspects of this pariah status were wisely abandoned. More recently, as public officials have slowly turned away from the “tough on crime” imperative that filled prisons in the 1990s, some states have lifted restrictions on voting as part of an effort to help ex-offenders better re-integrate themselves into society after their release. In 2000, the U.S. Conference of Catholic Bishops endorsed this approach, saying, “We must welcome ex-offenders back into society as full participating members, to the extent feasible, and support their right to vote.”

Felons can vote in Maine and Vermont even while incarcerated. In 13 states and the District of Columbia, voting rights are now automatically restored upon release from prison, and in 26 states rights are automatically restored after the completion of parole or probation. That leaves nine states where at least some ex-felons must petition the courts or the governor to make them whole citizens again. (In Arizona, Nevada and Wyoming, first-time offenders automatically regain the right to vote, while repeat offenders must be declared worthy of the privilege.) In Florida, where ex-felons must wait five years and then ask a gubernatorial board for the right to vote, about 1.5 million adults are disenfranchised—amounting to 10 percent of the voting-age population and 23 percent of African-American adults.

Unfortunately, reform efforts in some of those states are faltering. Last year, the outgoing governor of Kentucky, Steve Beshear, a Democrat, issued an executive order automatically restoring the right to vote to nonviolent offenders, but just a few weeks later the new Republican governor, Matt Bevin, rescinded the order. This April, Governor Bevin signed a law that imposes a $100 fee for going through the process of regaining voting rights. This amounts to a poll tax for people some political leaders would rather not see return to full participation in civic life.

This spring Gov. Terry McAuliffe of Virginia, a Democrat, signed an executive order reinstating voting rights for all ex-felons who had completed their sentences. When the state Supreme Court ruled that he had exceeded his authority with this blanket order, the governor began granting the voting rights one by one—claiming at one point to use an autopen to speed the process—and vowed to get through all through all 206,000 eligible citizens by Election Day. The state’s Republicans sued the governor for executive overreach, but this time the court ruled on his side (use of an autopen is apparently not an abuse of power). A Republican state senator has proposed a constitutional amendment that would automatically restore voting rights, but only to those convicted of nonviolent crimes and only if the offenders pay restitution, court costs and fines. Critics called this another form of poll tax, and Governor McAuliffe objected to the distinction between violent and nonviolent offenders, saying in a written statement, “While no one condones violent felonies, enlightened societies believe that all men and women are capable of redemption.”

We can never know whether an individual is truly capable of redemption, but that is not for our legal system, riddled as it is with bias and human error, to decide. If someone is deemed capable of working, paying taxes and generally participating in civil society, he or she deserves the right to decide how he or she should be governed. “Civil death” is a form of punishment that should be left in the past.

RobertDSullivan
Show Comments (
3
)
Comments are automatically closed two weeks after an article's initial publication. See our comments policy for more.
William Rydberg
6 years ago
In Canada even prisoners can vote in the Ridings that they lived. Likely because both CANADA, like Australia, were British possessions largely settled by the Empire, and a lot of Irish settled in Canada, and it's a sad fact that Irish were disproportionately jailed by the British at that time. Likely because they were poor and disadvantaged due to the Irish Potato Famine.. In CANADA, no Political Party has a lock on how the incarcerated will vote. Canadian prisoners are never deprived of their voting rights to my knowledge.
Tom Fields
5 years 12 months ago
1. Terry McAuliffe-another pro-abortion Catholic---tried to pardon some who were still in prison---some who were in prison in other states--betting that they would vote for "Abortion always" Hillary.And, Terry wants them in Jury pools. 2. Former felons should simply be required to spend some time---crime free. 3. Your comments on voter ID are disingenuous. When I vote---my neighbor working at the polls---says, "hi Tom, can I see your ID?" It is NOT HARD to obtain an ID---if you are here legally. 4. It is not, "civil death". It is part of the penalty for serious crime.
Charles Erlinger
5 years 11 months ago
The political utility of denying voting rights to ex-felons derives from the economic efficiency of the law if the objective is to suppress voting by specific, readily identifiable population groups. This can be accomplished by targeting members of those groups early in life to be charged and convicted as felons, thus insuring that with no further expenditure of funds or efforts those convicted cease to be of concern with regard to voting preference for the entire duration of their lives. If you consider that there is a per capita cost in each election cycle for a party to either enlist as a supporter or to suppress as an opponent a voter who can be identified as a member of a given population group, and that this cost grows at approximately the rate of inflation, from one election cycle to the next, then the cost avoidance for selected voter suppression per capita compounds from election to election and therefore grows exponentially per convicted felon.