Who will decide the next Supreme Court justice? You—so get out and vote.

Who will decide the next Supreme Court justice? You—so get out and vote. 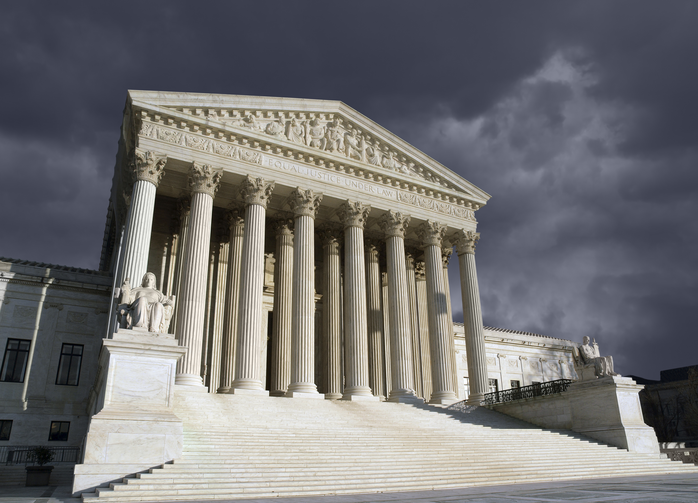 The U.S. Supreme Court, down one justice, begins its 2016 term in uncharted waters. Before the Electoral College votes are cast in this year’s presidential contest, the justices may be called upon to decide cases involving election intimidation, fraud, tallying and vote certification challenges. That means the court could determine who becomes president—who in turn will decide how to fill the bench’s ninth seat.

In October and November, the court will hear cases regarding insider trading by friends and family members, a billion-dollar design patent dispute between Samsung and Apple and a Sixth Amendment juror bias case. But it has yet to schedule the cases that are most likely to result in a tie should they be decided before the court is at full strength.

Blaine Amendments—constitutional or statutory provisions that forbid direct government aid to religious schools—exist in most states. The Supreme Court has never determined whether these laws, which establish a separation of church and state greater than what the establishment clause of the Constitution requires, violate religious rights protected by the free exercise clause of the First Amendment.

The court may answer that question with Trinity Lutheran Church v. Pauley, a challenge to Missouri’s exclusion of religious schools from a state-funded playground resurfacing program. The lower courts upheld Missouri’s right to prohibit public money from going to religious groups. Trinity Lutheran argues that the state’s constitution violates the U.S. Constitution. In Locke v. Davey (2004), the Supreme Court rejected a similar challenge to a Washington State law that denied public scholarships to college theology majors. Trinity Lutheran contends the cases are not analogous because a safe playground, unlike a theology degree, is not religious in nature.

If the court issues an instructive majority opinion in the Trinity Lutheran case, it will determine the outcome of Blaine Amendment challenges from other states. If the court issues a narrow ruling or a noncontrolling split decision, the court will face a slew of similar challenges. As of this writing, petitions are pending in Blaine Amendment cases from Colorado and New Mexico, and a decision on the issue from the Nevada Supreme Court is expected shortly. Unlike the Trinity Lutheran case, in which Missouri seeks to defend and enforce its Blaine Amendment, government officials in these states argue their “no aid” provisions nevertheless permit government aid to religious school students.

Federal civil rights laws prohibit public accommodations, like hotels, restaurants and theaters, from discriminating on the basis of race and religion. Many state laws apply to a wider array of businesses and consumers. Twenty-two states, including Colorado, prohibit most businesses that serve the public from discriminating based on sexual orientation. In Masterpiece Cakeshop, Ltd. v. Colorado Civil Rights Commission, a state court determined a baker could not refuse to make a wedding cake for a same-sex couple.

The U.S. Supreme Court has not yet decided to take the case, but it presents an important question that eventually must be answered: Does the free exercise and/or free speech clauses of the First Amendment prohibit enforcement of sexual orientation discrimination laws that interfere with religious expression. Mississippi and North Carolina recently enacted laws that permit religiously motivated discrimination. Challenges to these so-called bathroom laws, which require people to use public restrooms that correspond to their biological sex at birth, are winding their way through the lower courts and may arrive at the Supreme Court this term.

In May, the Obama administration issued a letter directing public schools to allow students and employees to use bathrooms that match their stated gender identity. Lower courts have come to different conclusions regarding the legality of this directive. The U.S. Court of Appeals for the Fourth Circuit determined that courts must give deference to the federal government’s interpretation of the law, but the Supreme Court later stayed that decision pending appeal.

Moreover, a federal trial court in Texas made a preliminary ruling that the Obama administration’s letter is not entitled to deference and was issued without abiding by the Administrative Procedure Act’s notice and comment requirements. The trial court then issued a nationwide injunction prohibiting the federal government from enforcing the guidance letter. Last year, the U.S. Court of Appeals for the Fifth Circuit used the same notice and comment argument to prevent the Obama administration from implementing its plan to protect up to five million undocumented residents from the threat of deportation. The Supreme Court split on whether that ruling ruling was correct. The Supreme Court will not act on these cases until after the election. It is likely that the federal government’s interpretation of transgender rights will change if Donald J. Trump is elected.

The court has already accepted two immigration cases this term. One is a gender discrimination claim based on the Immigration and Nationality Act’s differentiation between unwed U.S. citizen mothers and fathers whose children are born outside the United States. The law grants citizenship to a child born abroad to an unwed U.S. citizen mother as long as, at some time during her life, the mother was physically present in the United States for one year. Unwed U.S. citizen fathers are subject to longer and more restrictive residency requirements. An additional provision that unwed fathers legitimize and financially support their children before citizenship is conferred was upheld by the Supreme Court in 2001.

This term’s case, which challenges only the residency requirement differential, is the second time the Supreme Court will weigh the constitutionality of this provision. In 2011 Justice Elena Kagan recused herself, and the court split 4-to-4 on whether the U.S. Court of Appeals for the Ninth Circuit correctly determined the law’s gender bias is constitutional. The current case comes from the Second Circuit, which held the law violates the Fifth Amendment’s equal protection clause. Oral argument is scheduled for Nov. 9. Justice Kagan’s recusal could save the eight-person court from another deadlock.

The other immigration case accepted by the court relates to the government’s authority to detain aliens (non-citizens) who have committed certain crimes or immigration violations. Various statutes permit the government to detain aliens before, during and after their deportation hearings, but the due process clause prohibits indefinite or lengthy confinement without a determination (bond hearing) that detention is necessary. In 2001 the Supreme Court ruled the government may not indefinitely confine aliens who have been given final deportation orders but cannot be deported, either because they have no country or their home country will not accept them. But in 2003 the Supreme Court determined that aliens awaiting deportation hearings because of criminal or terrorist activity may be detained without bond determinations. The decision was based in part on the government’s assertion that most are held for fewer than 90 days.

This term, the court will consider whether the government must provide bond hearings to various categories of noncitizens, including those who are detained while their cases are on appeal. The Ninth Circuit Court ruled that the due process clause requires bond hearings every six months. The government argues the Ninth Circuit overstepped its authority and, at the very least, each case must be considered on its own facts. The litigation is complicated by a recent admission that, while arguing the 2003 case, the government misinformed the Supreme Court regarding the length of time aliens spend in detention.

The court will hear at least two cases involving the death penalty. One, coming from Texas, concerns the standard states may use to determine intellectual disability when deciding whether a person may be executed. The Supreme Court has held that the Eighth Amendment prohibits the execution of persons who are intellectually disabled but has not decided whether states must use current medical standards, or may rely on older standards, when making disability determinations.

The other death penalty case, Buck v. Davis, will determine when a defendant who has been sentenced to death based, in part, on testimony elicited by his own attorney that was racially biased and should not have been admitted, is entitled to judicial review of the sentence. The defendant alleges he received ineffective assistance of counsel because his own expert witness was permitted to testify that black men are more likely than others to commit violent crimes.

Juror bias and privacy are at the heart of Pena-Rodriguez v. Colorado, a case in which a defendant of Mexican origin was convicted after a juror made racially discriminatory arguments during closed-door deliberations. After the conviction was announced, two jurors expressed concern regarding the racial bias of the other juror, but the Colorado Supreme Court refused to grant a new trial. The U.S. Supreme Court now must decide whether the Sixth Amendment, which guarantees the right to an impartial jury, requires courts to consider statements made during normally secret jury deliberations.

The right of a person to sue the government for malicious prosecution based on an illegal search and seizure will be determined by the court when it decides Manuel v. City of Joliet. The Court of Appeals for the Seventh Circuit ruled against the petitioner even though there was no doubt he was unlawfully searched and imprisoned based upon fabricated police reports. The federal government supports the petitioner’s claim.

The court has not yet decided whether to hear the case of an abused child who, at the age of 10, waived his right to counsel and confessed to killing his neo-Nazi father. The California courts admitted his confession during a delinquency proceeding, but his lawyers contend that due process requires that children facing police interrogation be afforded the assistance of counsel or the advice of an impartial adult.

In August 2016 the Ninth Circuit Court refused to reconsider its decision that there is no Second Amendment right for members of the general public to carry concealed firearms in public. It is likely that gun rights advocates will petition the Supreme Court for review, but the eight-justice court may decide this is not the time to accept a case with far-reaching constitutional implications.

The Supreme Court did an exemplary job last term building consensus to avoid all but a few evenly split votes, but this term it cannot escape deciding emergency election disputes. The Senate’s refusal to fulfill its obligation to advise and consent (or not consent) to the president’s nominee leaves the country vulnerable to a disputed election that cannot be decided by a divided Supreme Court. Senators Chuck Grassley and Mitch McConnell, Republicans who prevented the Senate from acting, have said the people should decide who appoints the next justice. Every eligible citizen should heed this call to register and vote.

This article also appeared in print, under the headline “Docket Review,” in the October 24, 2016, issue.