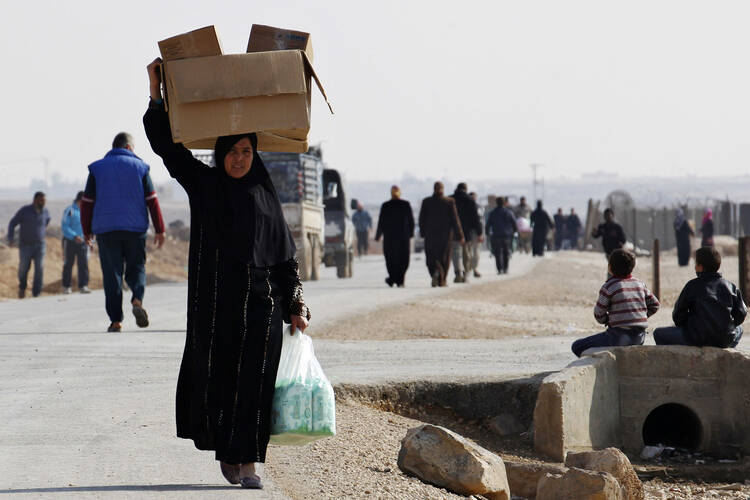 Every civil war is a tragedy, a unique sadness, for it turns brothers and sisters against each other. The human cost of the civil war in Syria—at least 100,000 dead, 6.5 million internally displaced and 2.5 million refugees who have fled to another country—is stunning. A third of the nation’s houses have been destroyed, 40 percent of the hospitals ruined; and two million children have been forced out of school. The government lays siege to rebel cities and suburbs, rebel forces fight one another, snipers shoot women and target doctors, people burn their clothes to keep warm.

Only a unified adherence to international humanitarian law can save Syria. All permanent members of the U.N. Security Council supported the council’s statement calling for all parties to allow the flow of aid and medical help. But some on the council, including Russia and China, have hindered its enforcement. Two other voices have called for a settlement and laid down requirements for successful peace talks: Human Rights Watch, in its “World Report 2014,” and a Vatican study group that included seven international experts and leaders.

The requirements include the participation of all parties to the conflict, an immediate cease-fire, an end to the funding and supplying of weapons by foreign countries and an immediate start of humanitarian assistance and reconstruction. “The test of progress,” according to David Milliband, president of the International Rescue Committee, is “the fate of Aleppo.” The international community must fully invest in stabilizing the divided city of 2.2 million. “If Syria is ever to recover its tranquility and beauty,” Mr. Milliband said, “this city must be saved from descending into hell.”

It is a cruel irony that people debate about the “most humane” way to kill a person, yet this conversation persists in some of the 32 states that still allow the death penalty. Is lethal injection morally preferable to the electric chair? Does a firing squad provide a more efficient execution than a gas chamber?

In recent years, European pharmaceutical companies have helped reignite this debate by refusing to sell drugs to American states for use in executions, making it more difficult for them to employ lethal injections. As a result, officials in Ohio relied on a new and untested concoction of drugs in the execution of Dennis B. McGuire, a convicted rapist and murderer, on Jan. 16. It took 25 agonizing minutes for Mr. McGuire to die. Witnesses heard gasping, snorting and choking sounds. Amber McGuire, his daughter, later said she heard “horrible noises” and covered her eyes and ears.

The family of the victim, understandably, was less sympathetic. “He is being treated far more humanely than he treated her,” they said in a statement. True. But is this the right standard for judging the means of execution?

Arguments about the relative humaneness of different methods of execution miss the essential point: When the state applies the death penalty, it deliberately ends the life of a human being. Whatever method it uses, the state perpetuates the cycle of violence.

The McGuire family plans to file a lawsuit in federal court. They claim the prolonged execution violated the provision of the Eighth Amendment that prohibits “cruel and unusual punishment.” Instead of continuing the futile search for more “civilized” instruments of death, lawmakers in the United States should finally recognize that capital punishment itself is unjust and unnecessary.

This should be the high point of the year for fans of the National Football League, and it surely was for followers of the Denver Broncos and Seattle Seahawks, who squared off in Super Bowl XLVIII. Yet the early days of 2014 were shadowed by the ongoing legal dispute over compensation for former players who suffer from the long-term effects of repeated concussions. The sport was further criticized by President Obama, who again remarked that if he had a son, he would not permit him to play professional football because of the hazards involved.

Football fans need to pay attention to these issues. Football is the most popular sport in America, so it would carry special significance if the fans support efforts to provide fair compensation for former players with health issues. The N.F.L. should also continue to alter the rules of the game in order to limit the most severe blows to the head. Players should be given the best available equipment, like the special helmet worn by Wes Welker in the A.F.C. championship game, to help prevent further concussions.

Long-term questions also remain. Should other sporting activities, like boxing, mixed martial arts and even the particular move in soccer called heading, receive more scrutiny? Head injuries, after all, are not unique to football. Should we begin to discourage participation in the most dangerous sports? There are many other sports that provide recreation and entertainment without the same risk of damage to the players’ health. These are admittedly heavy questions for the Sunday fan looking to relax and enjoy the big game, but we cannot in good conscience ignore them.

The Editors
Show Comments (
3
)
Comments are automatically closed two weeks after an article's initial publication. See our comments policy for more.
J Cabaniss
7 years 10 months ago
There may be a valid argument against the death penalty, but the claim that it "perpetuates the cycle of violence" isn't it. Anyone who has seen a pet put down knows the procedure is about as far from violent as one can get. With regard to the noises made by Dennis McGuire, it is up to a court to determine if they were anything more violent than the sounds made by a person snoring in his sleep. Describing Mr. McGuire's last 25 minutes as "agonizing" is to assert something that is simply unknown. It is appropriate to express an opinion on this or any other execution but it is surely inappropriate to invent facts to support that opinion.
Kevin McGrath
7 years 10 months ago
That sounds very like a nod in the direction of "euthanesia". The settled opposition the Church has come to have to the killing of human beings in execution or in abortion is not primarily because it is violent, but because when we do such things we exceed our authority. It is a kind of sacrilege.
Samuel Honeycutt
7 years 10 months ago
I have recently began reading 'The Consistent Ethic of Life' which is a book of lectures given by the late Archbishop of Chicago, Joseph Bernardin on the whole realm of Church teaching on the life issues. If you are against abortion then you must be against capital punishment, among other things.