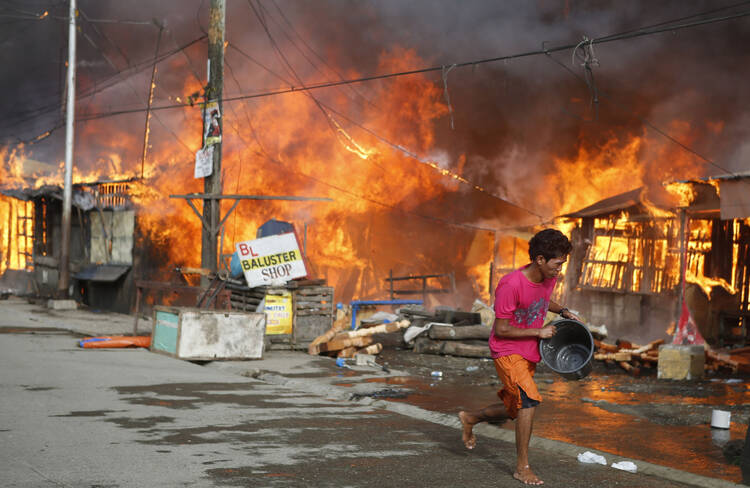 Even as the Philippines began the long road to recovery after the deadliest typhoon in its history, negotiations to resolve a man-made tragedy plodded on. The national government and the Moro Islamic Liberation Front, the largest rebel group in the Autonomous Region of Muslim Mindanao, took a significant step toward peace with the signing of a power-sharing agreement in early December. For over four decades, Muslim separatists in the south have fought for independence from what they view as an oppressive and exploitative Christian-dominated government. The insurgency has left 200,000 dead and impeded regional development.

Under the deal Manila would control the defense, fiscal and monetary policy of Bangsamoro, the political entity poised to replace Mindanao. The new autonomous government would be granted broad powers over internal matters like trade, tourism and education.

This progress, however, remains fragile. In September, Moro rebels left out of the latest round of peace talks laid siege to the predominantly Catholic Zamboanga City, sparking a weeks-long standoff with the military in which 200 were killed and many more displaced. A group of Catholic and Protestant bishops and ulema (Muslim religious leaders) condemned the violence as “inhumane, non-Christian, non-Islamic and contrary to the teachings of our respective faiths.” Sustaining such interfaith solidarity in the months ahead will be indispensable to translating signed agreements into lasting peace on the ground.

A recent lawsuit filed by the American Civil Liberties Union against the U.S. Conference of Catholic Bishops should challenge any complacency about the future of Catholic health care in the United States. The suit alleges that a young mother received improper treatment at a Catholic health facility in Muskegon, Mich., as a miscarriage dangerously progressed. But the A.C.L.U. has elected to build its suit not on any purported malpractice at the health center (Mercy Health Muskegon has yet to describe its side of the story), but on a novel accounting of negligence.

According to the A.C.L.U., it is not the attending physicians who may be at fault for any alleged lapses, but the U.S. bishops because of their promulgation of the church’s “Ethical and Religious Directives,” a longstanding guideline for treatment at Catholic health institutions. The directives prohibit direct abortion. The A.C.L.U. argues that the prohibition contributes to substandard care for women experiencing crisis pregnancies. The lawsuit is an obvioius threat to religious freedom. It is also incoherent, for it presupposes an alarming indifference on the part of medical licensing and accreditation boards nationwide that should have long ago intervened, had the bishops’ directives truly put patients in Catholic hospitals at risk.

The A.C.L.U. misunderstands several things about the church and how authentic expressions of faith are “lived” in society—how the directives actually work in the field, for one. Catholic bishops are not making decisions about care. The difficult calls are left in the hands of doctors and, when required, hospital ethics review boards, which are allowed broad latitude in any difficult, high-risk judgments. The suit also ignores the existence of Directive 47, which allows treatment in crisis situations even when it might result in the indirect termination of a pregnancy.

Recently, the Muckleshoot Indian Tribe purchased 96,307 acres of forestland and streams northwest of Tacoma, Wash. The Muckleshoots will manage the land for “long-term sustainable timber harvest, while preserving natural values including fish and wildlife habitat.” This single event might not be noteworthy if it were not part of a much wider pattern emerging in Indian country.

The Confederated Salish and Kootenai Tribes of Montana became the first in the nation, in 1979, to set aside tribal land—92,000 acres of the Flathead Reservation’s mountains and meadows—as wilderness. The Assiniboine and Sioux tribes in northeastern Montana are bringing back bison on the Fort Peck Reservation. In Minnesota, the Chippewa, or Ojibwa, have restored a ravaged walleye population at Red Lake.

Often enough the tribes are major partners with their neighbors in successful efforts to restore fish and wildlife. These efforts are not surprising when one understands a core value of Native American spirituality: the intimate relationship between human beings and the land. Christian reverence for God and creation has too often been marred by greed and domination. All people would benefit from an encounter and dialogue with native communities and their respect and care for the land.

The Editors
Show Comments (
4
)
Comments are automatically closed two weeks after an article's initial publication. See our comments policy for more.
E.Patrick Mosman
8 years 4 months ago
"that for the A.C.L.U. religious expression is a personal experience best confined to worship within a church building." Francis Cardinal George described it as, "Freedom of worship was guaranteed in the constitution of the former Soviet Union," Cardinal George wrote in a column in the Catholic New World. "You could go to church, if you could find one. The church, however, could do nothing except conduct religious rites in places of worship — no schools, religious publications, health care institutions, organized charity, ministry for justice and works of mercy that flow naturally from a living faith. We fought a long Cold War to defeat that vision of society."
rick henry
8 years 4 months ago
The ACLU suit is obviously about far more than one woman's death. Also, while I am no theologian, your statement "Catholic bishops are not making decisions about care. The difficult calls are left in the hands of doctors and, when required, hospital ethics review boards, which are allowed broad latitude in any difficult, high-risk judgments" seems dishonest in light of the excommunication last year of Sr. Mary McBride by Bishop Olmstead of Phoenix after following the exact procedure you describe.
Marie Rehbein
8 years 4 months ago
According to the ACLU: "Tamesha rushed to Mercy Health Partners in Muskegon, Michigan, when her water broke after only 18 weeks of pregnancy. Based on the bishops' religious directives, the hospital sent her home twice even though Tamesha was in excruciating pain; there was virtually no chance that her pregnancy could survive, and continuing the pregnancy posed significant risks to her health."Because of its Catholic affiliation and binding directives, the hospital told Tamesha that there was nothing it could do and did not tell Tamesha that terminating her pregnancy was an option and the safest course for her condition. When Tamesha returned to the hospital a third time in extreme distress and with an infection, the hospital once again prepared to send her home. While staff prepared her discharge paperwork, she began to deliver. Only then did the hospital begin tending to Tamesha's miscarriage."I do think it is appropriate that a lawsuit is filed. It is necessary to understand why, at the very least, labor was not induced at that time, as would be done in other health care facilities. There is no way that the pregnancy could continue if the fetus was no longer protected in the amniotic sac. Perhaps, the bishops are under some obligation to make certain that medical personnel that are at their mercy be assured that they will not lose their jobs and their right to communion for helping a miscarriage along.
Beth Cioffoletti
8 years 4 months ago
"All people would benefit from an encounter and dialogue with native communities and their respect and care for the land." Indeed. Last October I spent 10 days in the Southwest. The land is predominant. There are no buildings or neighborhoods to distract you from the encompassing drama that unfolds around you. You are captivated, mesmerized. The land not only changes your consciousness, it begins to seep into your skin and you know that you are not apart from the land. This is who you are. The Natives intuitively knew that you can not "own" the land any more than you can own the sky. One of my favorite places was a horse corral that we came upon in Monument Valley. All of the horses were gentle, friendly even. They came right up to us, pushing their big noses through the fence for a little pat. I was captivated by these animals - just touching them seemed like a way to enter a different way of knowing and being in life. It seemed that if I could live in the little trailer over at the edge of the corral, and do nothing my whole life but care for and be with these animals, that would be enough. A totally fulfilled and meaningful life, there would be no need to get out there and compete and try to be something or have things.