Healing the wounds of racism begins with crossing the street. 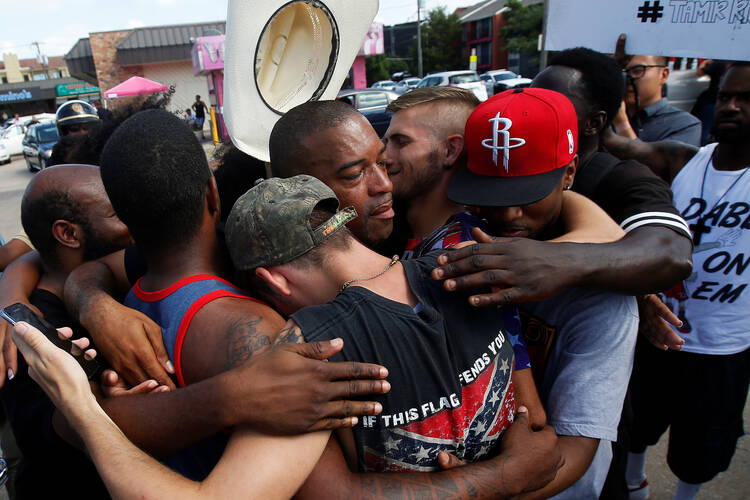 At the memorial service for the five police officers killed in Dallas on July 7, President Obama asked, “Can we find the character, as Americans, to open our hearts to each other?” On one Dallas street a few days earlier, some Americans already had begun to answer. On July 10 a small group of protesters from the Black Lives Matter movement marched down the street, frustrated with police brutality toward black Americans. On the other side of the road, a small group of counter-protesters, sitting amid U.S. and Texas flags, voiced their own frustrations: “We all matter,” one participant told the CNN cameras.

Yet this situation, in which tensions easily could have come to a head, was defused when the groups chose to talk. The conversation resulted in the protesters crossing the road to meet and shake hands with the counter-protesters. That moving interaction showcases the power of true encounter, the value of choosing to reach out when it might be easier to lash out.

Many people have struggled to make sense of the violent and tragic deaths of both black Americans and police officers by trying to quantify the conflict. Indeed, we need record-keeping that goes beyond the limited city and regional data now available, but better statistics will not save us from ourselves. True reconciliation will be motivated by names, not numbers: Eric Garner, Wenjian Liu, Alton Sterling, Brent Thompson, Tamir Rice and many others. We learn best when facts and figures become faces.

Pope Francis has often reminded us to “see the person,” to acknowledge the dignity of the people we meet. Yet this is only a  first step. Loving our neighbor requires all our senses. To love one’s neighbors means to act alongside them and to advocate for them. It means we must not only object to violent or racist or ignorant acts but also take positive actions to work against the systems that make such actions possible. We must listen. To love one’s neighbors is to seek to understand their experience. We need to put aside our own prejudices or have our own beliefs challenged. We must be vulnerable. We must be willing to find out when we are wrong. And we must be grateful for the voices that tell us so. Each of us needs those voices, which often come from surprising places.

Our church offers some examples of strong voices to follow: Servant of God Thea Bowman, F.S.P.A., taught, wrote, sang and ministered to her fellow black Catholics while promoting intercultural awareness. John LaFarge, S.J., a former editor of America and a white man, worked for years to improve race relations alongside A. Philip Randolph, a black civil rights leader and labor organizer.

Although the Catholic Church does not have a perfect track record when it comes to race relations, its deep network in diverse communities puts it in a unique position to work effectively for peaceful resolutions in today’s troubled times. The Faith in Flint program in Flint, Mich., for example, brings together black and white families from across the diocese to help each group to know their neighbors better through service and faith. Formal efforts by the church, perhaps by reviving organizations like the Catholic Conference for Interracial Justice, could also serve as continued reminders that our nation’s struggle with racism and injustice did not end with the passage of the Civil Rights Act. An encyclical from Pope Francis or an updated pastoral letter from the U.S. bishops on the sin of racism could go a long way toward fostering local, deliberate and sustained conversations about race and privilege among diverse populations and in the context of a faith community.

“A community consistently subjected to violent discrimination under the law will lose respect for it, and act beyond it,” Ta-Nehisi Coates wrote in The Atlantic  (7/12), arguing that building a just and democratic society is the first step toward reducing situations in which police intervention is necessary in the first place. Acknowledging the continued racism in our country can be difficult for those who do not directly experience it. Many want to believe that the struggle for equality has ended. But this is one reason racism persists. Systemic injustice does not disappear overnight. In some U.S. cities, schools are even more segregated now than they were in the 1960s. Quality education, just housing laws and equal opportunity for all, without discrimination or violence, remain causes that still need to be fought for.

Still, such large-scale efforts often begin with small encounters that remind us, as President Obama pointed out, that “we are not so divided as we seem.” At the end of the CNN video, one man calls out, “Everybody get it in here.” He stretches out his arms, bringing the two sides together for a group hug. And slowly each person joins—the protesters, the counter-protesters and even the police officer charged with keeping them apart. Together, they raise their voices in prayer.

Cell phone videos and cycles of violence: Kevin Clarke talks with Father Bryan Massingale on  our national inability to confront the social outcomes of racism is a “spiritual cataract.”
Reading Black Lives Matter through the Good Samaritan: There are many roads to Jericho in the world today, but our country keeps winding up on this one.
In the face of violence, why do we write? We write so that our silence does not become the privilege of ignoring suffering; we write to cling to the hope that another world is possible.