Coming Home: The liberation I found at L'Arche 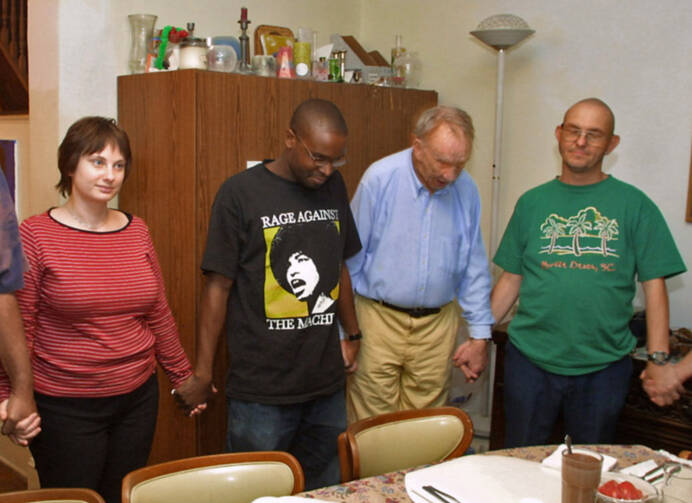 I remember exactly where I was standing. It was in a small hallway at a L’Arche home in Washington, D.C., when I met my friend and housemate Pedro. At the time, I was visiting L’Arche for a series of interviews. I had not yet received an official job offer, but even so, I knew that I would be coming to live and work there. I could feel it in my bones; this was where I needed to be. And amid this sense of assurance, a white-haired man walked up to me.

He leaned in toward my face, speaking loudly and emphatically in Spanish. Suddenly, I wasn’t so sure about coming to live in the community. The man before me raised his arms and gestured emphatically, but I hadn’t the faintest idea what he was saying. The foreign words were incomprehensible, and Pedro’s (not his real name) unique pronunciation, proximity and volume disconcerted me. I wondered: How should I respond? Finally my companion translated a few phrases. Pedro was giving me a blessing, welcoming me into his home. I smiled and nodded, grateful for the prayer. Yet I also thought: We’re going to be housemates? But I can’t understand a thing he says! God, are you sure?

The answer came back, almost before I’d finished the question: Yes.

So I took a deep breath, swallowed my bafflement and moved forward with the visit. And just a few months later, I was dragging my suitcase up the stairs and hugging my mother goodbye. My time as a live-in direct care assistant with L’Arche had begun.

L’Arche (French for “the ark”) is a faith-based, nonprofit organization that creates homes where people with and without intellectual disabilities share life together. L’Arche began not as a crusade to change the world but as a single individual’s daring act of kindness and hospitality. L’Arche came into being in 1964 because a man named Jean Vanier, under the spiritual guidance of The Rev. Thomas Philippe, welcomed strangers into his life. He invited three men with intellectual disabilities (Raphael, Philippe and Dany) to move from a local institution into his home in the French village of Trosly-Breuil. That first night was particularly challenging for all involved. In fact, Dany was gone the next day. But Raphael and Philippe remained with Vanier, and their unconventional home grew and gave rise to others like it.

At present, there are over 150 L’Arche communities worldwide, located in 40 different countries. L’Arche has made a significant contribution to social change and inclusion in the 40-plus years since its inception; Vanier’s recent Nobel Peace Prize nomination comes as no surprise to those who know L’Arche. But in 1964, Vanier little dreamed that his act of obedience would ripple outward in such a profound way. In fact, Vanier’s first impression of L’Arche was that it was a failure.

Most accounts of L’Arche’s founding mention just two men, Raphael and Philippe (and even those key individuals often go unnamed). Dany’s arrival and subsequent swift departure are largely omitted. In a world obsessed with achievement, it seems strange to say that the first L’Arche household lost one fourth of its members overnight. And yet this first “failure” is an important part of the story, vital to understanding L’Arche’s “success” today.

Many community members will tell you that their first introduction to a L’Arche community is a study in paradoxes. Coming to community is both illuminating and unsettling, comforting and disorienting. Likewise, my first meeting with Pedro felt like a failure in that I perceived him as a stranger, unknown and unknowable. Yet at the same time, I knew that I was being led to live with him, to become a part of his family. It was a strange sensation, knowing that this man was a part of my path but not having the faintest idea as to how I might connect with him.

My Journey to L’Arche

Even so, remembering how I came—or shall I say, was brought—to the L’Arche community helped me to persist in forging connections there. L’Arche was an unexpected twist in my life story. Despite the fact that my younger brother, Willie, is on the autism spectrum, I never suspected that I would care for others with special needs after graduating from college. I thought I would be a full-time writer—and now I am—but it turns out that finding a place among those with special needs was a prerequisite to finding my story, finding my voice.

My path to L’Arche became clearer when I learned more about Jesus’ life, how he reached out to people with special needs who were outcasts from society. Jesus loved people with all kinds of disabilities, and with that comes a tremendous secret that we rarely acknowledge: With or without a formal diagnosis, we all need the kind of compassion and care he offered. Another paradox: We all are in need of support, yet we all have something to offer one another. We all have gifts to give. And it is on this subversive truth that L’Arche stands. L’Arche communities seek to be a place where the “least of these” are the first of all.

Of course, doing so takes time and deliberate effort. Putting people with special needs first is not what society teaches. In an era when essential Medicaid funding is cut more and more every year, when many caregivers earn the minimum wage or less, caring for the least of these is not an easy path. Furthermore, many adults with intellectual disabilities move slowly; in order to meet them where they are, we must slow our frantic pace. And it is hard for us to cultivate that kind of loving patience in this age of super-fast everything. Yet it is precisely because it is so hard for us that it is so fruitful; we need this change of pace more than we know.

Working in ministry alongside people with special needs requires that we change, and that change is, in the words of Madeleine L’Engle, “both a challenge and a joy.” To be sure, there is treasure to be found in the special needs world. My friends at L’Arche have been my greatest teachers in the art of enough and the spirit of sufficiency. They have taught me to stop my flurry of activity, to pause and stare out windows and watch the birds fluttering in the trees, to nurture friendships and breathe deeply.

These gentle lessons served me well when it came to building a relationship with Pedro. Since I did not know what to do, I did the same thing Vanier did: I started small. I practiced Spanish with my fluent housemates. I sat with Pedro, letting the rhythmic cadence of his words wash over me (and, hesitantly, I pronounced a few phrases in Spanish in response). Gradually, the man who seemed like a stranger became a beloved friend. Pedro revealed to me that, as Leo Tolstoy wrote in Anna Karenina, “If it is true that there are as many minds as there are heads, then there are as many kinds of love as there are hearts.” I came to love Pedro before I could fully comprehend his speech. Why? Because even though I could not understand his words, I grew to understand his heart.

Soon after, an unexpected miracle occurred. I woke up one day and found, to my immense surprise, that I could understand Pedro. It was as though someone had flipped a switch inside my brain; hours and hours of listening had finally paid off. Soon, I took delight in translating Pedro’s speeches for visitors. I had despaired of ever feeling connected to Pedro; now, I helped new members to connect with him. I had the privilege of helping others dismantle their barriers, and I never tired of seeing it, that moment when people started understanding Pedro for themselves. I knew just what it felt like: liberation.

Indeed, that is the work of L’Arche, to break down barriers between people with and without intellectual disabilities. The organization’s charter states, “In a divided world, L’Arche wants to be a sign of hope.” When people visit L’Arche homes, they are struck by the ways in which the members depend upon one another. Core members (individuals with intellectual disabilities at the center of community life) depend on direct-care assistants for help with personal care tasks like showering and dressing; in turn, assistants depend on core members for invaluable things like friendship, support and mentorship. Yet it is also important to remember that implicit in the statement, “L’Arche wants to be a sign of hope,” is what L’Arche does not attempt to be. It does not pretend to be a solution to the problem of providing for all individuals with special needs. Instead, L’Arche seeks to signify a larger reality: God’s love and the promise of welcome for the stranger within us all.

Caroline McGraw is the author of I Was a Stranger to Beauty (ThinkPiece), now available as a Kindle single. She lives in Alabama with her husband and writes about caring for people with disabilities at AWishComeClear.com.

Show Comments (
2
)
Comments are automatically closed two weeks after an article's initial publication. See our comments policy for more.
Sara Damewood
9 years 10 months ago
Thanks for sharing your experience. What a wonderful idea!
ed gleason
9 years 10 months ago
with 5.4 million with Alzheimers .. 1 in 8 will have it, the charism of L'Arche will be in much need for all us care givers.. thank you