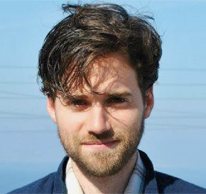 Marcia Lee plants community everywhere she goes. During the hours I spent driving around half-abandoned neighborhoods of Detroit with her, she stopped at her church to plan a new environmental program and take the parish dog for a walk; visited her mentor, the 99-year-old activist-philosopher Grace Lee Boggs; attended Mass with the friars she works with as a co-director of the Capuchin Franciscan Volunteer Corps’s Midwest branch; dropped off a falafel platter at the meeting of her Asian-American empowerment group; and, finally, brought a pumpkin pie from the collective house where she lives to Holy Thursday, her interfaith supper club.

During the decade she has lived in Detroit, the Capuchin friars’ common life has been her buoy. “I might not still be Catholic without the Capuchins,” Lee, 31, told me. And she wants more. She wants to live and work in stronger communities outside the friary, as the early Christians did in the Book of Acts. Lately she has been meeting with a group—mostly fellow women of color—that is discussing how to build cooperatives.

A co-op can take many forms. It can be made up of producers, consumers, workers or neighbors practicing participant ownership and democratic governance. Cooperative enterprises can operate as living alternatives in, but not of, an economic system that thrives on ruthless profit-seeking and inequality. Marcia Lee is part of a long legacy of Catholics who have led the global co-op movement.

In May I visited the mountain town of Salinas, Ecuador, where the textile mill, chocolate factory and dairy are cooperatively financed through the villagers’ credit union—only to find that the whole system began with a Salesian priest. How about the Mondragon Corporation, the world’s largest web of cooperative industries, employing more than 70,000 people in Basque country? The work of another priest. The oldest credit union in the United States is St. Mary’s Bank, founded by a pastor of Franco-American mill workers in New Hampshire; north of the border, Catholics have nourished Quebec’s rich cooperative tradition and the Antigonish co-ops of the Maritime Provinces. Today, many of the most vibrant U.S. co-ops are emerging among Latin-American immigrants. An America editorial in 1944 describes an Iowa parish’s farming cooperative as reflecting “the Catholic ideal of truly social worship.”

Msgr. John A. Ryan, once a prominent economist and moral theologian, praised cooperativism at length in his book Distributive Justice (1916). He saw it as an amalgam of the best impulses of socialism and capitalism, minus the worst. In the co-ops among poor farmers and workers that Ryan examined, he saw an antidote to the exploitation rampant under capitalism then and now. Subsidiarity and solidarity are written into the business model. But what attracted him most about co-ops was their capacity for moral pedagogy—“the mechanism and the atmosphere,” Ryan wrote, “for a greater development of the altruistic spirit than is possible under any other economic system.” Spirituality, also, has often been the glue binding strong co-ops together; the monastic tradition reflects with particular clarity how communal prayer helps us practice communal ownership.

As today’s worsening inequality comes to resemble Msgr. Ryan’s Gilded Age, there is a co-op renaissance going on in the United States and around the world. People are moving their money from too-big-to-fail banks to local credit unions, and young entrepreneurs are building open-source online tools that help them cooperate in new ways. In places like Marcia Lee’s Detroit, the flight of capital makes co-ops a particular necessity. These so-called “new economy” initiatives are largely secular; and without church communities as a foundation, they face an uphill struggle in a culture of rogue individualists. In this latest surge, U.S. Catholics largely have been missing in action.

What if Catholics were to recognize, once again, the moral imperative to build the economy cooperatively? Parishes could incubate new co-op credit unions, enterprises and housing developments. Catholic legislators could pass laws to make co-op incorporation less onerous. Business leaders could restructure their institutions to spread ownership among workers and customers. The result would surely be, in Peter Maurin’s words, “a society in which it is easier to be good.”

Nathan Schneider is the author of Thank You, Anarchy and God in Proof. Website: TheRowBoat.com; Twitter: @nathanairplane.