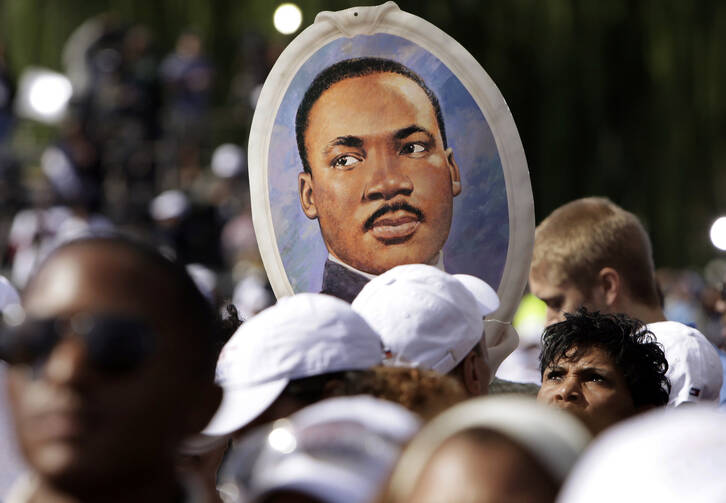 On Aug. 28 our country marked 50 years since the Rev. Martin Luther King Jr. commenced his March on Washington for Jobs and Freedom. Conscientious Catholics and other Christians also might have noted that the Aug. 28 is the feast of St. Augustine.

It is a divine coincidence that Reverend King marched on the feast of St. Augustine, one of his favorite early church heroes. It was Augustine’s declaration that “charity is no substitute for justice withheld” that inspired the young King to pursue his ministry with more fervor.

It is important to remember that King viewed the March as a religious experience more than a political rally. His famous speech, “I Have A Dream,” was actually a sermon rooted in the words of the prophet of Isaiah who too had a dream of a world made new with God’s loving justice.

Reverend King himself said, “In the quiet recesses of my heart, I am fundamentally a clergyman, a Baptist preacher.”

Sadly, King and his vision have been largely secularized by modern culture. Reverend King, a Christian prophet, has morphed into Dr. King, a mere social reformer.

During coverage of the 50th anniversary, the media hardly acknowledged any of the religious roots of King or the March itself.

The cause of this phenomenon is wide and varied, but the results are clear: a distorted picture of King and a lack of understanding of how religion can help liberate societies from social ills.

We live in an era where politicians increasingly use God to further personal ambitions. In today’s culture, which leaves little room for authentic religion, a politician is much more likely to pay lip service to God than to take time for prayer, study and reflection.

Reverend King was different. For him God was not a resource to get elected to office. For him God was not a means to any political end, but the source and summit of all his political activity. King’s relationship with God encouraged him to help found the Southern Christian Leadership Conference. These Christian prophets and martyrs stood up to bombings, beatings, jailings and assassination plots to lead the struggle for civil rights. In the late 1960s, when other groups and leaders within the civil rights movement begin to argue for more confrontational and—quite frankly—more violent tactics, King and the S.C.L.C. maintained their nonviolent Christian stance.

Understanding King’s religious identity also reminds us that religion at its best can be such a power for good in our nation. The faith of Reverend King helped him advance the civil rights agenda just as the faith of Abraham Lincoln encouraged him to end American slavery a century earlier.

In the final analysis, Karl Marx was wrong: religion is not the opium of the masses. Authentic religion—fueled by prayer and community—allows society to see a true reflection of itself: the good and the bad. It makes us slow down, be quiet and take a longer view of human history. It can open our eyes to the social ills that the pace of everyday life does not allow us to see.

In short, good religion can help liberate society from its worst evils.

It is important that as we commemorate Reverend King, we remember the man he truly was: a Christian prophet for justice and a man deeply formed by a religious experience of God and of Jesus Christ. Doing so does not marginalize King, but rather contextualizes him correctly and gives his vision flesh. It reminds us that King’s dream was not his alone, but was and still is the dream of God for humanity.

Christopher Hale, a senior fellow at Catholics in Alliance for the Common Good, is a co-founder of Millennial, a digital journal dedicated to lifting up the voices of young Catholic intellectuals in the public sphere. He helped lead national Catholic outreach for the re-election campaign of President Obama. You can follow him @chrisjollyhale.

Show Comments (
4
)
Comments are automatically closed two weeks after an article's initial publication. See our comments policy for more.
john andrechak
8 years 8 months ago
Watching the tape of Dr. King's last public address, in Memphis, is my only certain sense of the Holy Spirit working with mankind. And one should note he died defending worker rights.
Gregory Lynch
8 years 8 months ago
Great article. It is noteworthy that Dr. King based his civil rights struggle very clearly on the Christian sense of justice, including the Catholic concept of moral law going back to St. Augustine. I did a brief blog on Dr. King's Letters from a Birmingham Jail last week in which he challenged Christian leaders to follow their professed commitment to Christ. http://wp.me/p3pJsV-ra
Alex Mikulich
8 years 8 months ago
Christopher, Thank you for an excellent essay. Dr King's witness and legacy has been secularized and watered-down in so many ways. One I would add that white American Christians need to attend to both individually and as members of faith communities, is Dr King's criticism of privileged groups and white moderates in "Letter from Birmingham Jail". Too often we assume that the transformation needs to happen to society--to others somewhere else and not us. We white Christian Americans have yet to take up Dr King's prophetic message as a way of life.
John Zolkowski
8 years 8 months ago
Excellent essay that points out the importance of King's example and ideals as a guide to curing the ills of our modern culture.