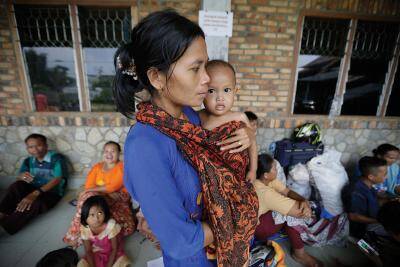 Three men kneel before the camera, their neon orange jumpsuits striking against the muted desert landscape. Each gives his name, year of birth and village, but not before stating why he is there: “I am an Assyrian Christian.” The video, released on Oct. 8, is another in a growing library of execution films recorded by militants of the Islamic State. More than a year after Americans watched with horror the beheading of the journalist James Foley, three deaths may no longer shock or grab headlines. But their stories belong to one of the most alarming narratives of the 21st century: the mass exodus of Christians from their biblical homelands in the Middle East.

A new report from the English charity Aid to the Church in Need, titled “Persecuted and Forgotten?”, documents the oppression of Christians in 22 countries between October 2013 and July 2015. The group found that while religious persecution continues in states like China and Saudi Arabia, the rise of extremist Islamic groups represents an existential threat to Christianity in parts of the Middle East and Africa. In many countries well-publicized killings, torture, rape and kidnapping have driven entire communities of Christian and other religious minorities to flee for their lives, in what A.C.N. considers “human rights violations tantamount to full-scale religio-ethnic cleansing.”

The report’s findings on Iraq are especially disturbing. Since 2003 the Iraqi Christian population has declined from roughly 1.4 million to an estimated 275,000, almost half of whom are internally displaced. After the Islamic State’s conquest of Mosul and Nineveh in the summer of 2014, Christians were given the choice to convert, pay a religious tax or be killed. Thousands fled. The current rate of decline suggests that if conditions in the country do not improve, it is quite possible that the Christian community will be “all but extinct” in five years.

The U.S. State Department’s annual “International Religious Freedom Report,” released on Oct. 14, echoes the A.C.N.’s warnings. Nonstate actors have exploited ineffective or nonexistent government security structures to spread their violent and religiously intolerant ideologies. In his remarks at the rollout of the report, Secretary of State John Kerry acknowledged that this development carries with it daunting challenges for those committed to the protection of religious freedom worldwide. “By issuing this report,” he said, “we hope to give governments an added incentive to honor the rights and the dignity of their citizens.” This raises the question: How can the United States and the international community respond to a threat that operates beyond the reach of sanctions and diplomatic shaming?

One place to start is with the language we use. In early October, the International Religious Freedom Roundtable sent a letter to President Obama asking that he formally declare the Islamic State’s systematic destruction of Christian, Yazidis and other religious minority communities a genocide. “Such a declaration,” the roundtable statement reads, “will give a stronger voice to the long-suffering victims while furthering and sharpening ideological engagement against those currently at the forefront of this campaign.”

Practically, the designation could speed up the provision of humanitarian aid and processing of refugees in the United States. And at the global level, acknowledgment by the United Nations of genocide has the potential to trigger the oft-invoked but ill-defined “responsibility to protect.” If ever there were a situation crying out for an international constabulary force, surely the civilizational collapse in Iraq and Syria is it (see our editorial “Opportunity for U.N. Reform?” 10/26).

Five years after the Arab Spring, it is tempting to conclude that propping up dictators is the only way to preserve what’s left of Christianity in the Middle East. This year’s winner of the Nobel Peace Prize, however, suggests an alternative. The Tunisian National Dialogue Quartet, a coalition of workers, business leaders, lawyers and human rights activists, was recognized for its decisive role in translating the country’s revolution into a constitutional government that guarantees “fundamental rights for the entire population, irrespective of gender, political conviction or religious belief.”

While Tunisia is not Syria or Iraq, its experience demonstrates the crucial role that civil society plays in a pluralistic society. Between bullets and the ballot box there is a complex social fabric that the hyper-individualistic West has too often neglected in its interventions in the Middle East. The people who are fleeing the heinous crimes of the Islamic State are victims, yes; but they are also doctors, lawyers and teachers. We must think creatively about how these vital human resources can be marshaled not only to make life in exile endurable but also to strengthen the communal bonds that will be crucial to building a society that respects all faith communities, if and when they are able to return.

The Editors
Show Comments (
1
)
Comments are automatically closed two weeks after an article's initial publication. See our comments policy for more.
Charles Erlinger
7 years 3 months ago
This last paragraph, especially the part beginning "...victims, yes; but they are also doctors, lawyers, or teachers...." Should be part of every journalism school's list of case studies on how not to write editorials. Editors: think about it, and extend the writer's training period for at least another year.