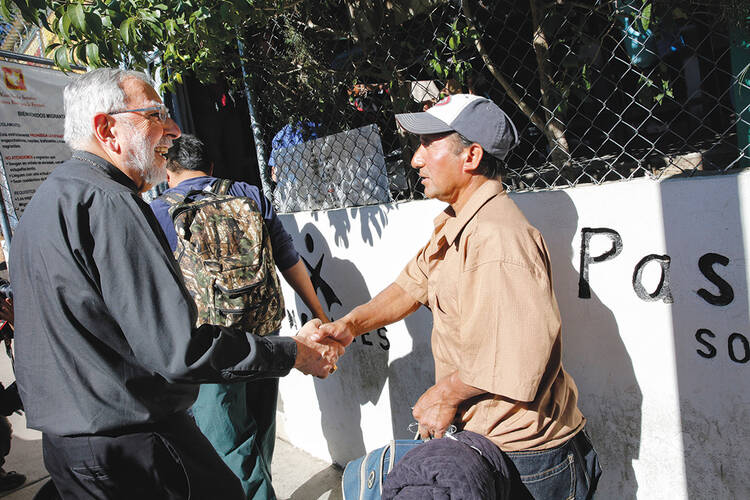 Catholicism is undergoing an epochal transformation. For more than a millennium dogma has been the hard core of church life, defining who is in and who is out. Partisans have fought over the correct way to define Christian belief; they condemned their opponents and persecuted them as heretics.

In this new era, the pertinent standard is the good of souls. With evangelization as the goal, boundaries are more porous. Openness to dissenters and critics, welcome for sinners and outreach to people on the margins of society are becoming the defining pattern of Catholic life. The challenge is to reappropriate the heart of the Gospel: “The Son of Man has come to seek and to save the lost” (Mt 19:10). The shift away from dogma as the center of church life to pastoral care has a lot to do with Pope Francis’ personal pastoral style, but the trend was already underway in the last years of St. John Paul II’s pontificate.

St. John Paul, who himself took some hardline doctrinal stands, understood nonetheless the egregious sins often “committed in service of the Truth,” that is, orthodoxy. During the Day of Pardon in 2000, in the company of the Roman Curia, he asked God’s pardon for those offenses. In his homily he urged, “Let us ask pardon for the divisions which have occurred among Christians, for the violence some have used in the service of the truth and for the distrustful and hostile attitudes sometimes taken towards the followers of other religions.”

Alongside John Paul, imploring God’s forgiveness, stood Cardinal Joseph Ratzinger, prefect of the Congregation for the Doctrine of the Faith, enforcer of orthodox belief (no accident of casting in that solemn moment). Looking backward, their humble repudiation of so much of what had been deadly serious in church life anticipated the greater change the church has begun to undergo from a heavily dogmatic to a more pastoral church.

John Paul also smoothed the way in downgrading the role of dogma in Catholic life with his martyrial ecumenism. Since the late Reformation, both Catholics and Protestants had held that right doctrine rather than courageous behavior determined who was a true martyr. But St. John Paul took time out to pray at the tombs of Protestant martyrs, and he included Protestants slain for their faith among those honored in the Jubilee of the Martyrs in 2000.

John Paul’s acts of devotion affirmed that the baptism that unites Catholics and Protestants weighs more heavily in the Christian life than the doctrines that historically had divided them. Virtue outshone truth. Putting errors of the church’s second millennium behind us, John Paul was modeling not a new type of Christianity but a different type, in which asking forgiveness and reconciliation are more important than being right.

Fourteen hundred years ago, Pope Gregory the Great exemplified this style of episcopal leadership and elaborated on it in his Pastoral Care (591). Originally a handbook for bishops, Gregory’s treatise quickly became a standard for priests and spiritual directors as well.

The unique good of souls. Like Pope Francis today, Gregory emphasized the role of bishops as pastors, in contrast to their status as “nobles” in the church. Their principal concern should be the good of the souls entrusted to them. Like Pope Francis in “The Joy of the Gospel,” Gregory insisted on knowing the faithful in all their diverse conditions. The first axiom of pastoral practice, Gregory believed, was that there is no one set solution to every case.

Each case has its own unique characteristics, which the pastor must take into consideration. “Efficacious pastoral action requires,” Pope Emeritus Benedict comments, “that [the bishop]...adapt his words to the situation of each person.” From Gregory’s “acute and precise annotations” on individual character and the peculiarities of context, Benedict notes, “one can understand that he really knew his flock and spoke of all things with the people of his time and of his city.”

Discernment, even for “the good.” In directing souls the pastor must help people understand the particular temptations of their condition and penetrate the layers of self-deception in which vice poses as virtue.

Here we might think of Pope Francis’ assessment, in “The Joy of the Gospel,” of the temptations of pastoral workers and of his many exhortations to avoid regarding priesthood or the episcopacy as entitlements to privileged living. “Through warmth, patience, listening and spare advice,” writes Thomas Oden summarizing Gregory, “the pastor helps his parishioner to overcome his self-deception” and grow in virtue.

Encouraging behavioral change. We should not be misled by certain trends in pastoral theology and spiritual direction that seem to make the spiritual life begin and end with introspection. The purpose of self-knowledge is reform of life, progress in virtue and commitment to the common good. True pastors balance sensitivity for the Christians in their care with attention to improvement in their conduct and growth in their social engagement, particularly with the poor.

Social action, as both Pope Emeritus Benedict and Pope Francis have taught, is a core component of evangelization. According to “The Joy of the Gospel,” mature Christian behavior today includes the inclusion of the poor in society; the promotion of peace; and civic, ecumenical and interreligious dialogue. At its most intimate, Christian maturity also demands a conversion of lifestyles to a simpler, more generous way of life.

Humble, considerate leadership. Christ is the model of Christian leadership, for Gregory as for Francis. Jesus mixed with people of every sort; he searched out the lost and welcomed sinners. “Whatever authority is given in the pastoral office is paradoxically validated when it is accompanied by the sign of humility,” writes Oden, “signaling that it shares in Christ’s own empathy for human fallenness.” Bishops, priests and spiritual guides must not rejoice “to be over [persons] but to do them good,” wrote Gregory. Pope Benedict, following Gregory, also underscores humility as the key virtue in pastoral leadership.

These four guidelines for pastoral ministry apply as much to bishops and pastoral ministers today as they did in Gregory’s time. Pope Francis has been modeling this kind of servant leadership. It will still be some time before the college of bishops can be expected to adopt the pastoral role as their primary identity and the episcopacy is transformed.

The full emergence of a pastoral church does not depend on bishops alone, however, nor even on the time Pope Francis has to reshape the episcopacy by his appointments. It also depends on the expectations of the whole people of God. They have to aspire to spiritual growth and welcome challenges in the name of the Gospel. The people also have to demand spiritual leadership and a broad range of pastoral care from their bishops and priests.

In the hiatus between the two sessions of the Synod of Bishops on the Family, one way to begin is to demonstrate the people’s desire for dialogue with bishops on the pastoral care of families. In particular, they need to voice their desire for attention to the unexplored afflictions suffered by families outside the narrow but much ballyhooed circle of divorce, remarriage and same-sex marriage.

These pastoral concerns include the growth of singleness among adult Catholics, single parenthood, the delay of marriage due to poverty, the emergence of combined households, violence and abuse of children and women, care for the divorced and for children of divorce, the multigenerational family and care of the infirm elderly, the impact of inequality on family strength and the spiritual growth of couples and families. When bishops and the synod attend to these issues, then we will know today’s church is advancing along the path to becoming a pastoral church.

Drew Christiansen, S.J., a former editor in chief of America, is the Distinguished Professor of Ethics and Global Development at Georgetown University.

Show Comments (
1
)
Comments are automatically closed two weeks after an article's initial publication. See our comments policy for more.
THE CHRISTOFFERSONS
7 years ago
A brilliant and realistic assessment!