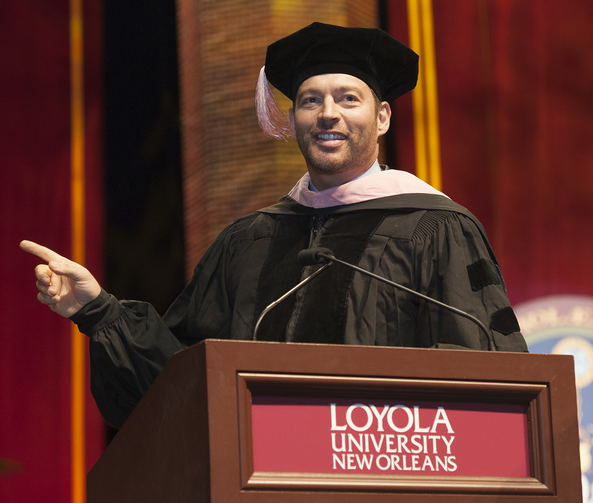 What’s so great about a Jesuit education?

It’s a fair question, given the bills that parents and students face these days. That’s not to say that Jesuit colleges are more expensive than comparable institutions of higher learning. The cost of tuition, room and board also varies widely from school to school. Still, the price tag for any Jesuit college might prompt anyone to ask: Is it really worth it?

It’s also a common question for people unfamiliar with Jesuit education: What’s the big deal? Last year, my nephew, now a high school senior, was musing aloud about what college he’d like to attend. Not surprisingly, my first question for him was whether he had considered any Jesuit schools. He was noncommittal, as were his parents. Since neither my nephew nor his parents attended Jesuit schools, they wondered what the fuss was about. And why go out of your way to explore something, much less pay a premium, if you don’t know what you’re getting? Sometimes I compare this to lobster. If you’ve ever enjoyed a sweet Maine lobster, you might be willing to pay a few extra dollars for it in the future. But if you’ve never had lobster, and you see the high price on a menu, you might think, “Meh. I can live without it.”

Over the past few years, I’ve been happy to be invited to speak at Jesuit colleges and universities, and events like the Ignatian Family Teach-in. By now I’ve probably met hundreds of young people from “our” schools. And last month I visited three Jesuit schools at commencement: Gonzaga University in Spokane, Creighton University in Omaha and Canisius College in Buffalo. In light of all these experiences, I want to say this: I’m amazed by what happens at Jesuit colleges and universities.

Much of this amazement comes from meeting not just administration, faculty and staff, or fellow Jesuits, as helpful as that is, but another group: students and their parents. Admittedly, on commencement weekends I’m seeing the kids on one of the happiest days of their lives. Also, the students who approach me are a self-selected group. Not every young man or woman wants to talk with a middle-aged priest on graduation day!

Nonetheless, what I hear is best summed up by what a young woman from Gonzaga said to me: “I loved, loved, looooved my Jesuit education!” When pressed, they’ve told me three things that stand out.

First, cura personalis, that educational goal of caring for the “whole person.” Every college worth its salt cares for the intellect, and perhaps the body, but Jesuit institutions are committed to the care of the whole person—which includes the soul. By encouraging students to attend to their spiritual lives, inviting them to Masses and retreats, as well as offering them service opportunities rooted in faith, they try to care for the whole person. In that way they help them become whole people.

Second is the rather elusive concept of the magis—the more, the better, the greater for God. It comes from the Jesuit motto Ad Majorem Dei Gloriam (“For the Greater Glory of God”) and, more fundamentally, from the Spiritual Exercises of St. Ignatius Loyola. If you would be willing to work hard to follow a “temporal” leader you admire, wrote Ignatius, “how much more” would you be willing to do to follow Jesus? In Spokane, I asked a smiling young graduate what most defined his time at Gonzaga. He threw his head back, looked skyward and shouted, “Magis!”

Third is the idea of being men and women for others. The original expression, from a talk to Jesuit alumni by the former Jesuit superior general Pedro Arrupe, was “men for others.” Sometimes it’s rendered “men and women for and with others,” which is a bit of a mouthful. It means, in short, that a good life is an other-directed life. During the commencement at  Canisius, all the students who had signed up for a year’s service after graduation—in the Jesuit Volunteer Corps, the Mercy Corps, Teach for America and other service organizations—were asked to stand and be recognized for their commitment. It was an admirable  number.

After the Baccalaureate Mass at Creighton University, I met the beaming parents of a soon-to-be-graduate. They gushed about the education their daughter had received and told me how much it had meant to them as well. It was moving to listen to them. The night before they asked their daughter what she would change about her last four years. “Nothing,” she said.

Happily, my nephew agrees. He’s starting at Fordham in September.

James Martin, S.J., is editor at large of America and the author of "Jesus: A Pilgrimage" (HarperOne). Twitter: @JamesMartinSJ.

@jamesmartinsj
Show Comments (
5
)
Comments are automatically closed two weeks after an article's initial publication. See our comments policy for more.
Jane Brown
4 years 11 months ago
One of my favorite New York moments: on a subway, a woman was talking about how impressed she was with her daughter's education at Fordham. An Irishman chimed in with what a great education he received at Jesuit schools in Ireland,\; someone else chimed in that he had attended St. Peter's Prep and University. I added my enthusiastic note about my LeMoyne education. Do you know how often random conversations like this happen on the subway? Not often! Obviously, we had a compelling topic!
Richard Grant
4 years 11 months ago
Ad Majorem Dei Gloriam !
Thomas Knauer
4 years 10 months ago
Fr. Martin's article, "Care for the Person," is another in a long line of articles in America touting the value of Jesuit education. I couldn't agree more with Fr. Martin, and all of the other authors. I say there is something profoundly special about a Jesuit education. I say "profoundly" not in a flippant sense because I can't think of any other, grander adjective. I say "profound" because that's a word with a mysterious but grand implication. I graduated from Spring Hill College in 1968 -- the dark ages to many, a heady and wild age to many others (that's the way we lived it). I am not sure I consciously absorbed the three characteristics of Jesuit college education Fr. Martin describes so eloquently in his article -- cura personalis, magis, and "being for others." However, I am convinced that the wonderful, life-long friends I made at SHC and I were infused with at least the seeds of these and probably some other, "noble" qualities during those four years. I can assure you it was entirely unconscious, but incidious (in a good sense of the word). Jesuit education (all those philosophy and theology courses and me a chemistry major!) worked its way into our being and I can't imagine any of us being the same people today without that gift from the Jesuits at SHC 50 years ago. I don't know how you guys do it, Fr. Martin, (it is still a mystery to me), but there is no doubt that I am convinced of the inestimable value of a Jesuit education. Tom Knauer Spring Hill College Class of 1968 (also attended St. Louis U. High School, St. Louis U., and Creighton U.)
Rosalie Krajci
4 years 10 months ago
Re "Care for the Person" by James Martin, SJ: What a great uncle you are! Although there were no Jesuit high schools for girls when I was one. my four brothers all attended Canisius high school (Buffalo, NY), and two of them attended Jesuit colleges (Canisius and Holy Cross). Therefore, besides having my own Catholic education deeply influenced by Jesuits, I feel Ignatian by extension. Yes, we wrote AMDG at the top of each paper and retreat masters were mostly Jesuits. The establishment and continuation of Jesuit schools is certainly one of (if not THE) most important ministries of the order. Thank you all.
Sandra Mears
4 years 6 months ago
My favorite Jesuit moment came some years after graduation. I at a conference with a group of attorneys from the U.S. and Canada. We were discussing where we went to law school at the cookout, when a coworker of one of our group walked up and said to his colleague,"I didn't know you went to a Catholic school." The Jesuit grads without a thought simultaneously said, "No, Jesuit." We all laughed, but it was a truth for us even though our graduation dates spanned the '50s, '70s, and '90s, we all knew that being Jesuit educated was something special. Even my husband who is Jewish cherishes his time at SLU.