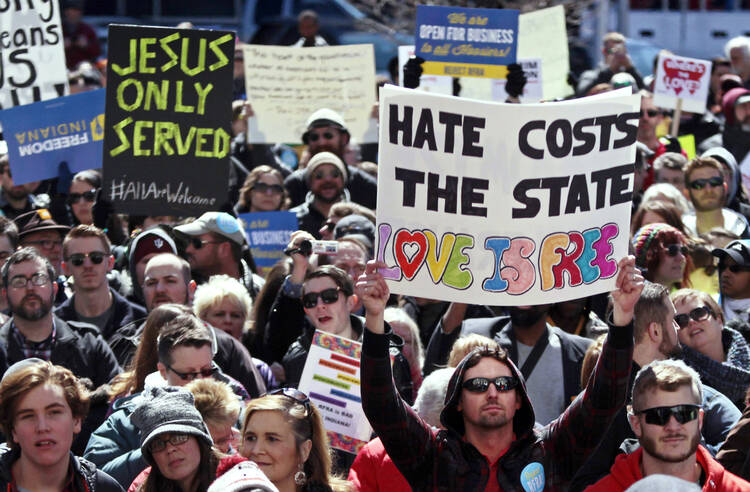 It has been very discouraging to watch the acrimonious debate over religious liberty in Indiana and Arkansas. The passage of a Religious Freedom Restoration Act in these states sparked widespread protests over possible discrimination and exposed a deep divide in our nation on questions of marriage, civil rights for gay and lesbian people, and freedom of religion. One of the many unfortunate outcomes of this controversy is that these issues are now co-mingled in the public mind. Another is that the religious liberty “brand” has been damaged. As the respected Supreme Court litigator Douglas Laycock noted, “It is a disaster that religious liberty has become a partisan issue.”

It should not have been this way. When Congress passed the federal Religious Freedom Restoration Act, often referred to as RFRA, in 1993, the goal was to protect religious practices. The law, which passed by a large margin, states that if a person’s exercise of religion is “substantially burdened,” he or she must be excused from complying with the law unless the government can prove that it has a “compelling interest.” In 1997 the Supreme Court ruled that the statute did not apply on the state level. This led many states to pass local RFRA laws. Twenty-one have now done so, and 16 more have proposed legislation. Yet given the recent controversy, many of these states may not follow through.

That would be unfortunate. Without guidance from legislatures, state courts may not have the resources to decide the questions that will inevitably arise regarding the protection of religious interests. The recent controversy has focused almost exclusively on Christian business owners who object to catering or photographing same-sex marriage ceremonies. Yet there are many other religious groups who need the protection of RFRA, especially minority religious groups whose practices may seem anathema to the majority of the population. A Muslim who wants to grow a beard in prison for religious reasons, for example, or a Sikh who comes to work with a small ceremonial dagger worn as a required religious practice deserves the protection of state law.

The cases of Indiana and Arkansas provide contrasting examples of how to implement RFRA on the local level. Gov. Asa Hutchinson of Arkansas wisely waited to sign his state’s law until it was amended to reflect exactly the 1993 federal law. Indiana, meanwhile, made a tweak to the federal law by including businesses among those that deserve religious protection. The question of how to implement RFRA in light of the Supreme Court decision Burwell v. Hobby Lobby Stores, Inc., which extended religious liberty protections to closely held businesses, is a difficult one. One potential compromise, proposed by Mr. Laycock, is to protect those small-business owners who by the nature of their business would be required to actively take part in a function they find objectionable, while prohibiting larger corporations from taking advantage of these protections.

Indiana’s law was amended on April 2 to prohibit discrimination against gays and lesbians in areas like housing and employment. The state’s Catholic bishops have raised important concerns about the wording of these revisions, which were obviously done quickly to quell a firestorm. The new language exempts churches and religious “providers,” but it is unclear where independent Catholic schools and hospitals fit in this new framework. Unfortunately, Indiana has no separate nondiscrimination law. Including this language in a bill meant to protect religious liberty only muddies the waters. A better approach would be to follow the lead of Utah, which recently passed a law to prevent discrimination against gays and lesbians. That law, which was supported by gay rights groups, was crafted in conjunction with religious leaders to ensure that their interests were protected.

Passing legislation to protect the civil rights of gay and lesbian people, while simultaneously working to adopt RFRA legislation that mirrors the federal law, may be the only way out of this thorny patch. In the current political environment, passing RFRA legislation without a commitment to nondiscrimination laws will be perceived as a partisan initiative—in some cases, correctly. RFRA should not be used for political purposes.

It is time to stop the partisan denunciations. Defenders of RFRA are correct that these laws are not initiating a new era of Jim Crow discrimination. But they should not be surprised when attempts to adopt this legislation in states that do not already have legal protections for gays and lesbians are greeted with suspicion. Meanwhile, defenders of civil rights should acknowledge that marriage is for many people much more than a civil ceremony and that it is unreasonable to expect people who hold deep religious beliefs to embrace society’s quickly changing norms in all areas of public life. We are still far apart on these issues, but perhaps if we stop shouting we can find a way to take a small step forward.