The way that Pope Francis broke protocol that most people missed

The way that Pope Francis broke protocol that most people missed 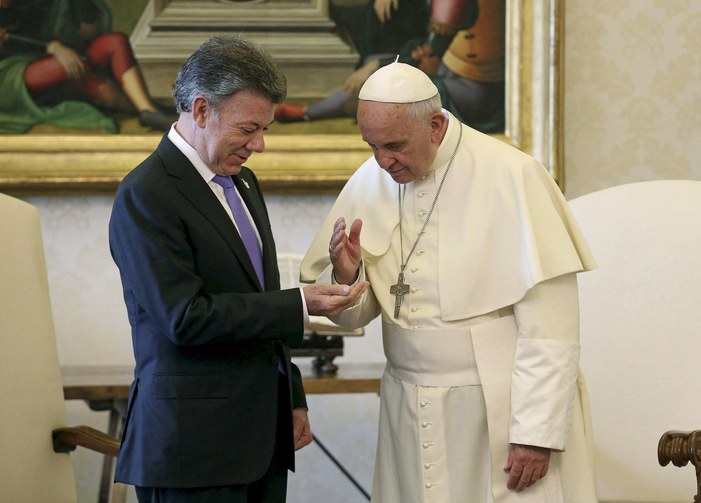 A significant, even historic thing happened on Saturday morning, Feb. 27, when Argentina’s new president, Mauricio Macri, visited Pope Francis in the Vatican. Few noticed it, however, because it regarded protocol.

In the 20th century, Vatican protocol required that if a Catholic head of state visited the pope accompanied by a spouse not married to him (or her) in the church then that person was not admitted to the official audience with the pope. Instead, the pope would greet that person separately in another room after the main audience.

This is what happened on June 15, 2015, for example, when Colombia’s president, Juan Manuel Santos, came to visit the pope with his spouse, María Clemencia Rodríguez Munera. She married in the church in 1982 but soon divorced and had not received an annulment when she contracted her second marriage, with Santos, in a civil ceremony in 1987. The Vatican insisted that Santos’s wife could not join him for the audience with Francis, so the pope had to greet her afterward in a different room.

Pope Francis felt deeply unhappy at this situation imposed on him by protocol. He felt an injustice had been done to the couple, a Vatican source told the Argentine daily La Nación. On more than one occasion since his election, Pope Francis has commented publicly, albeit in a humorous vein, that the difference between protocol officials and terrorists is that one can dialogue with the latter!

After serious reflection, he decided to change the protocol. Thus, before Argentina’s new president visited him in the Vatican accompanied by his third wife, Juliana Awada, sources told La Nación that Francis, overcoming resistance from the protocol chiefs and secretariat of state, upended the protocol and ensured he could receive Macri with his wife in his private library.

A former Vatican official, who asked for anonymity, commenting on this change, applauded Francis for taking this step. “Francis is committed to the culture of encounter and goes out to meet people in their real life situations. That is his starting point, and it is bearing much fruit in all directions. He seeks to include, not exclude people.”

By now, it has become clear to everyone that Francis is a reforming pope, and his reform is not confined to the Roman Curia. It is moving in many directions. Two recent well-known examples illustrate this: first, his decision to open the Jubilee Year and Holy Door in Bangui and to allow holy doors to be opened in every diocese worldwide; and second, his decision to change the ceremony of the washing of feet on Holy Thursday so as to include women. In addition, in August 2013 he broke with protocol by bowing to Queen Raina of Jordan when, according to a centuries-old tradition, it should have been the other way round. Francis does not want an imperial court, or indeed any kind of court.

All this reform is an integral part of Francis’ broader vision for the church that he outlined in his programmatic document, “The Joy of the Gospel,” a text that merits greater attention than it has so far been given. In No. 43 he wrote, without explicitly mentioning protocol: “In its ongoing discernment, the church can also come to see that certain customs not directly connected to the heart of the Gospel, even some which have deep historical roots, are no longer properly understood and appreciated. Some of these customs may be beautiful, but they no longer serve as means of communicating the Gospel. We should not be afraid to re-examine them.”

In that same section, the pope recalled that “the church has rules or precepts which may have been quite effective in their time, but no longer have the same usefulness for directing and shaping people’s lives.” He continued: “Saint Thomas [Aquinas] pointed out that the precepts which Christ and the apostles gave to the people of God are very few. Citing Saint Augustine, he noted that the precepts subsequently enjoined by the church should be insisted upon with moderation ‘so as not to burden the lives of the faithful’ and make our religion a form of servitude, whereas ‘God’s mercy has willed that we should be free.’”

Pope Francis concluded: “This warning, issued many centuries ago, is most timely today. It ought to be one of the criteria to be taken into account in considering a reform of the church and her preaching which would enable it to reach everyone.”

Show Comments (
2
)
Comments are automatically closed two weeks after an article's initial publication. See our comments policy for more.
William Rydberg
4 years 10 months ago
In my opinon the real test of your theory is when he "binds", not when he "loosens". And I am not talking about addressing a particular long-neglected financial control deficiency in a curial department...
Lisa Weber
4 years 10 months ago
The desire to include people rather than exclude them is one of Pope Francis' most endearing qualities.

This article also appeared in print, under the headline “Breaking Protocol,” in the March 21, 2016, issue.