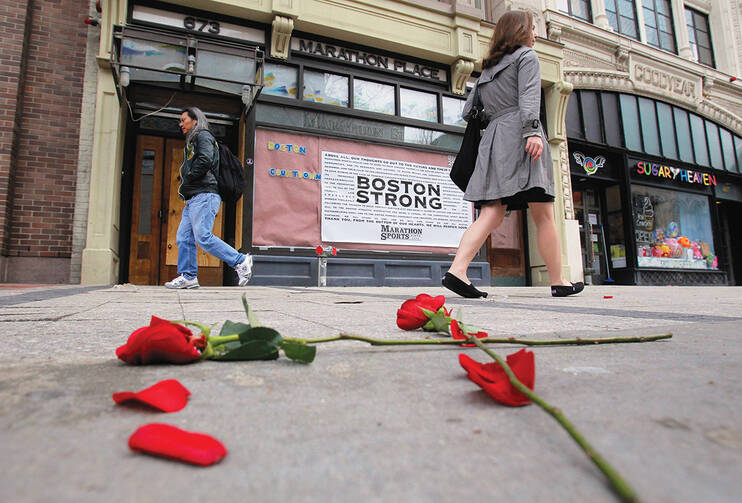 Acts of violence have been much in the news and on our minds lately. In Ferguson, New York City and Paris, deadly shootings have disrupted lives and communities. For Christians, the response to such brokenness ought to reflect and cultivate the theological virtue of hope, a hope that directs us toward that fuller and better future. It is part of the public mission of the church to respond to both the good and evil in the world in ways that orient us toward the fullness of the reign of God.

In the immediate aftermath of the Boston Marathon bombings on April 15, 2013, many Bostonians took up the slogan “Boston Strong.” The yellow and blue ribbon became a symbol of defiance, of solidarity in suffering and in rebuilding for people with a visceral connection to a beloved community event. In a show of support, people around the country and elsewhere bought gear plastered with the slogan and contributed to a fund for victims of the bombings. Clearly, “Boston Strong” tapped into a desire for community, solidarity and hope.

But as the second anniversary of the Boston Marathon bombings approaches and the surviving admitted perpetrator stands trial, it is worth revisiting that appraisal and asking how the Boston Strong ethos could have better reflected and engendered hope in the aftermath of the tragedy. In particular, we might ask how the virtue of hope can be more confidently promoted over its contrary vices of despair and presumption.

A lack or deficiency of hope can lead to despair. Indeed, despair is not hard to find in contemporary society, and certainly not in the face of tragedy. From a theological perspective, Dominic Doyle, a professor of systemic theology at Boston College, suggests, “In effect, despair says that human sin exceeds God’s mercy.... [I]t destroys the movement to share in God’s goodness.” In the aftermath of the marathon bombings, despair tempts us to constrain our vision of what we can be and become through grace. We cannot imagine being as strong as we have the potential to become.

Despair is not avoided by pretending there is no hurt. Real grief must be voiced and the losses must be lamented. Otherwise, despite all the inspirational success stories from survivors of tragedies like the Boston Marathon bombings, there is a danger of glossing over the real, deep, continuing pain many suffer. The severe depression of amputees and rescuers and the lifetime of anticipated medical expenses cannot be overlooked.

Our attention ought to be drawn to the psychological and emotional ramifications of this sort of violence and destruction. It is only if we can voice the fullness of grief that we can seek its transformation. Only if we are to recognize honestly the lingering effects of violence on this scale can we devote resources to preventing and healing this sort of trauma. Despair tempts us to both dwell on and become inured to the damage; hope calls us to see it and to work toward healing the wounds.

Not giving into despair also forces us to look at the perpetrators. Facing the Boston Marathon bomber Dzokhar Tsarnaev forces us to explore the realities of religious and ethnic violence and the disjunction felt by those who try to escape violence and land on U.S. soil. In the more immediate term, it allows us to grapple with ambiguities as Mr. Tsarnaev faces trial in a capital case. Despair gives up on his humanity. A not fully human person is easy to kill. Despair sees no hope for healing in his continued living. Hope offers the possibility that grace can provide the strength for new life—for victims and perpetrators alike.

‘Boston’ Is Too Small

Hope may be a grace, a free gift of God, but true hope does not come cheap. The grace that grants hope is, in the words of the German theologian Dietrich Bonhoeffer, costly. Presumption as a vice is an excess of hope. Again, Dominic Doyle names the problem well. “Presumption is the expectation of reaching the goal without letting God change one’s life in the process.... It expects eternal life without ongoing conversion.” Elements of this presumption are visible in certain responses to the marathon bombings that actually minimize the magnitude of what grace can accomplish among us.

One prominent theme in the aftermath of the bombings was that “the terrorists” had only redoubled the running community’s resolve. That there was a running community was widely accepted. A large banner at the Boston Public Library read “Lace up your shoes and run for those who can’t.” The popular pastime of running became “running for unity” or “running for freedom.”

Of course, there is nothing inherently harmful in wanting to respond to communal violence with running. At the very least, it can provide an opportunity to join together, to remember, to talk about victims, for the injured to feel empowered in their own lives and for others to feel that they are resuming something that had been interrupted. The problem is if we act as if all of our running efforts are somehow blessed; as if merely owning gear marketed as commemorating the Boston Marathon substitutes for community; as if running has become in and of itself an act of compassion and solidarity in defiance of hate. Most of the time, distance running is not about world peace and unity; it is about running.

The focus, moreover, on distance runners and their friends and families excluded from our category of “Boston” many Bostonians. Recreational distance running in the U.S. is a sport that skews strongly toward white, upper-middle class, highly educated participants. The community activist Jamarhl Crawford points out that the violence that took place in the space of the Boston Marathon was, rightly, viewed as an affront. The violence that takes place in non-white spaces of Boston, the “regular” violence, does not raise the same sense of outrage. Similarly, if the physical and psychological trauma endured by victims and witnesses of the gruesome violence rightly moved us to compassion, we have not always been so moved by the same types of trauma affecting victims and witnesses of war.

Presumption allows the “return to normalcy,” which we herald as the goal of grieving, to be simply a return to our old way of life. Presumption puts a bandage over the wound without helping it to heal. Presumption lets us maintain a truncated vision of “Boston.” Hope makes our definition of who is included in “Boston” broader and more inclusive. It is not that some lives can be returned to what they were before; it is that the life of the whole community can be transformed in hope.

Always we must ask whose interests are supported by current practices and operative ideologies. If our practices of remembrance are really self-serving attempts to fulfill personal marathon dreams, we must lay that self-centeredness bare. If our commemorative “Boston Strong” gear is about strengthening our identities as athletes, having bought all of the proper accoutrements, then we ought to face that fact honestly as well. We must challenge our presumptive practices and ask whose interests they are serving.

There are, though, ways in which memorialization of tragic violence can and does overcome presumption with critical reflexivity and can offer opportunities to both grieve and turn that grief into hope through the imagination of an alternative reality, a prophetic hope. In some instances, the memorialization of the Boston Marathon bombings has provided excellent examples of tutoring in imagination and hope. One has been through highlighting community responsiveness and self-sacrifice. Tom Grilk, executive director of the Boston Athletic Association, has pointed to the “caring, courage, community, and common purpose” he has seen emerge in the aftermath of the marathon bombings.

This responsiveness was both immediate and sustained. As the bombs went off, finish line volunteers, bystanders and professional first responders rushed into the carnage to find, soothe and treat the wounded. Financial contributions to funds for the care of the injured were instant and generous. The One Fund Boston disbursed more than $80 million dollars in donations directly to victims and survivors. Moreover, friends and family members sometimes put their own life plans on hold in order to give time and practical support to survivors. Survivors noted their experience of being loved and supported in uniquely graced ways.

Sometimes community responsiveness has been epitomized by those most affected by the violence. The death of the innocent, vivacious 8-year-old Martin Richard is, for many, the embodiment of what makes this bombing senseless and tragic. A great sign of hope, though, is the way that Martin’s family, themselves severely injured, have drawn on the many people who have supported them to create a foundation in Martin’s name. This foundation has already built community by starting a Little League baseball program for children with disabilities and by funding student-led projects that promote “peace and kindness.”

The reaction to the Boston Marathon bombings undoubtedly brought to light other examples of immediate courage, sustained generosity, solidarity and ingenuity in the face of adversity. We must continue to highlight these stories, for we need these moral exemplars and narratives of healing. What we can add are more opportunities to allow people to practice generosity and solidarity as part of our memorialization. It is essential to note that occasions of remembering the marathon bombing can be linked to the way we envision our best hopes for society. For instance, when we involve ourselves in the life of someone who has lost a limb, we can not only better appreciate the need for long-term supportive services but also enter into a discussion about how we as a society might see ourselves providing them.

Tragic and terrorizing violence stops us in our tracks, as it should, and prompts us to recalibrate time and space. In this recalibration, we have the opportunity to reflect critically on reality and express the genuine grief in this reality. If this grief is a hole in the wall that holds up our psyche, papering over that hole with the presumption that everything will be fine is no more helpful than is the despair of staying in the grief forever. Instead, pointing to, celebrating and building on practices of community-building and meaning-making can engender imagination and hope and truly make Boston stronger.

Christopher J. Welch is currently pursuing a Ph.D. in theology and education at the Boston College School of Theology and Ministry.