Becoming Human: The Incarnation calls us to a new life. 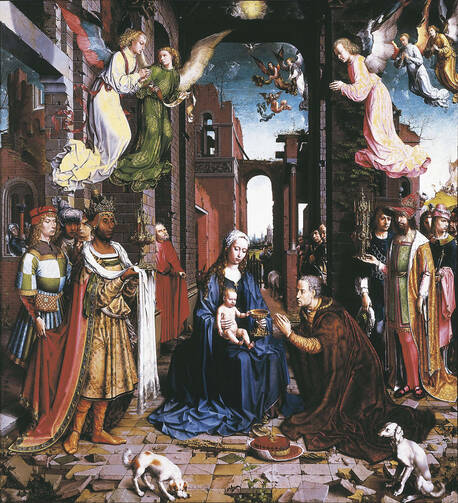 How to choose from the bountiful treasury of images awaiting our contemplation (and sheer delight) in this darkening season before Christmas? Do you prefer Netherlandish precision and detail? Italian tenderness and warmth? The classical proportions and palette of Poussin? The transcendent simplicity, for all their mastery, of Rembrandt or Velázquez? Or perhaps something admittedly sentimental but so familiar that we love it all the more?

Let me pause with you before “The Adoration of the Kings,” painted some 400 years ago by the Flemish artist Jan Gossaert and now in the National Gallery in London. At first there is nothing surprising here, except of course for the ravishing perfection of the piece. But the longer we look (as is always the case), the more we are lost in the scene. The beautiful Virgin Mother, dressed in robes of precious lapis lazuli blue, holds her poised child, who, in a rhapsodic interpretation of the story in Matthew’s Gospel, is receiving the gift of a golden cup from the eldest king—biblically a magus, or wise man, and traditionally named Gaspar. His younger colleague, Balthazar, stands to the left, with Melchior to the right, each likewise holding elaborate gifts. (The names are carefully inscribed on their clothing or the gifts.) The entire scene unfolds—no one seems entirely still—in ruins that may represent either antiquity, the Temple of Judaism or both.

Looking longer, we notice telling further detail. The handsomely gowned attendants of the royal visitors; Joseph, half-hidden in the ruins between Balthazar and Mary, with a bright red robe and a cane; the shepherds of Luke’s Gospel behind the picket fence at the back of the ruins, but also, minutely, in the far distance, first hearing the news of the child’s birth from an angel; and flights of angels, nine in number to represent the heavenly hierarchies beloved of medieval speculation—the whole world of God’s creation is suggested, centered on the child. And presiding discreetly over all is a small dove, at the very top of the picture, under what seems at first the star of the Magi but may well also refer to God the Father, who sends the Son among us.

The painting, named after one part of the “Christmas story,” as we know it today, proves in fact to be a visual theology of the mystery of the Incarnation, God’s revealing to us the Christ in whom divinity and humanity are one and through whom the entire creation is meant to be redeemed. Even the baptism of Jesus, intimated at least by the appearance of the dove of the Holy Spirit who descended upon Jesus in the waters of the Jordan, is included. For the early church, the baptism was in fact a more central part of the mystery than we recognize now.

In Western Christianity we currently celebrate Christmas on Dec. 25, Epiphany two Sundays afterward and then, on the following Sunday, the Baptism of Jesus. But in the early church the inner coherence of these different aspects of the Incarnation was celebrated with a greater sense of their temporal unity.

Until the late fourth century, the church in the East celebrated “Epiphany” on Jan. 6, “the manifestation of God in Jesus” both in his birth (including the visit of the Magi) and his baptism. (Reference was also made to his manifestation at the wedding in Cana.) By the end of the century, however, imitating Western practice, the East began to celebrate Christmas as the nativity, the birth of Jesus, on Dec. 25 (including the visit of the Magi), leaving the baptism and the wedding at Cana to be celebrated on Jan. 6. When the West borrowed from the East in turn and began to celebrate a feast of the Epiphany on January 6, it took only the visit of the Magi for that day.

I recall this (all too abbreviated) history of a complex liturgical development, because it reminds us that incarnation, God’s becoming human with and for us, was from the beginning conceived as an extended temporal event, less a moment (birth) than a story (the beginning of a life). And clearly the life, the humanity, of Jesus cannot be complete at birth. There were years yet of unseen labor, presumably learning carpentry from Joseph. After the baptism by John, the opening of his public life and ministry, there was his testing in the wilderness, both crucial experiences for the course of his life. He had yet to experience the effect of his preaching, his healing of the sick, his companionship with outcasts, his mastery of the natural world, not to mention the growing antagonism of leaders both religious and civil.

More and more clearly it appeared who this unique man was and who he presented himself to be. The climax of his life, the cresting of its saving course, comes with a week of utmost challenge and ultimate rejection, only then to be vindicated by the God who was (and is) his Father. “As with all of us,” writes Elizabeth Johnson, C.S.J., “the mystery of his person was never totally expressed...until the time of his death, when he transcends this world and is raised from the dead. Then his ultimate identity burst upon him in all clarity.” Then he is the fully human and fully divine person he was meant to be, the startling, suffering Savior once born in utter helplessness and now raised as “the first fruits of those who have fallen asleep.”

But is his humanity complete even then? He is “One and Unique,” writes Hans Urs von Balthasar, “and yet one…who is to be understood only in the context of mankind’s entire history and in the context of the whole created cosmos.” He was not born for himself and the glory that was naturally his but “for us and for our salvation.” And we are one with humanity past and, we now realize, one with a vast humanity for centuries to come. They too are called to be his, the body of Christ, which will be complete only when time is complete. It is not simply a matter of adding to the communion of saints. It is a matter of “completing Christ,” achieving the whole Christ (St. Augustine’s “Totus Christus”).

The early Christian writers we call the Fathers of the Church, meditating on the Prologue of St. John’s Gospel and the first chapter of the Letter to the Colossians, knew this, and we are invited to appropriate it again and in a still deeper sense by theologians who speak of “deep incarnation,” writers who point out that in becoming flesh the Word of God becomes united not only with the human species but with all living creatures and with “the cosmic dust of which they are composed,” as Sister Johnson says. “The incarnation is a cosmic event.” Reflecting many years ago on humanity in the cosmos and the hope our faith gives us for it, Karl Rahner, S.J., wrote:

Is not each person completely that person’s self, entirely brought to that fulfillment which the person should have and which God has eternally planned for the person, only when all persons are made perfect in the Kingdom of God? Must not all individuals wait for their ultimate fulfillment upon the complete fulfillment of all things?

We think we are human because we behave as humans (though how often so deplorably). But we know, when we are honest with ourselves, that we are but struggling wayfarers whose true selves will appear only when brought finally before the blinding light of God—when we are fully one with the risen Christ.

Could Jesus have become human without sharing, though faultlessly, that journey? Is not the deepest blessing of Christmas not that he was born as the infant child of Mary but rather that he was born to become fully human, and with the promise that we too might be so?

Still, this wide full vision, this hope for the redemption through Christ of all God’s creation, should not deprive us of the moment that is the fulcrum of the whole, the birth of the divine infant in Bethlehem. Nor should one overlook the bread of life that sustains us in our remembering and our journey. In Gossaert’s painting, the child who has been given golden coins by Gaspar returns one to his visitor, a clear and potent symbol of the eucharistic host taken from what the visitor does not yet know to be a ciborium.

When we celebrate again this Christmas the birth of Jesus, the appearance of God and humanity united in one small infant, we celebrate as well our birth for heaven—and the call to everlasting life of all the universe and the children of God in it for ages to come.

Show Comments (
4
)
Comments are automatically closed two weeks after an article's initial publication. See our comments policy for more.
Luis Gutierrez
7 years 11 months ago
It is hard to understand why the Eternal Word becoming human translates into the male-only church hierarchy. It seems to me that, in the sacramental economy, we need both men and women ordained to act in persona Christi capitis.
Leo Cleary
7 years 11 months ago
I remember the yearly reflection that Fr. O'Donovan would give at Christmas time for his faculty, staff, Jesuit Community and friends at the chapel at Georgetown University when he was president. He would later send that reflection in his Christmas card to us. We did the Igantian repatition of reading or thinking about something that brought us great consolation by reading and reflection on his Christmas letter. This Christmas reflection and the use of such a marvelous piece of art ranks up there with the best of what Fr. O'Donovan did for us years ago. That style of care is never old. It is so nice to see it alive again and from such a wonderful Jesuit.
Stephen Hutchison
7 years 11 months ago
What a beautiful painting and reflection on the Incarnation. Thank you!
John Fitzgerald
7 years 11 months ago
Thank you to Fr. Leo for writing this and the editors for publishing it. Good stuff.