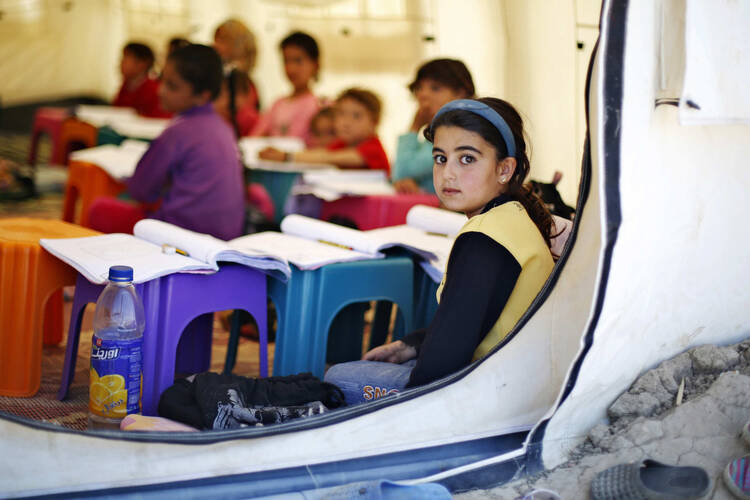 I never realized the power of stories until I began working with refugees in East Amman. The stories I hear vary. Some are extremely happy, filled with vivid memories of times that were present with love and laughter, enough to fill a large Middle Eastern sitting room. These are the stories where you see people’s faces light up, their bright brown eyes becoming as large as a full moon hanging in the desert sky to light the secrets of the mysterious terrain that would otherwise be clothed in darkness. When people tell these stories, their whole bodies move, contouring to the universe in a way that almost transports them back in time. It is a place they desperately want to go back to—and they want to take you, too. Yet it will always be secret, always be special to them. These are the things they can carry when everything else they carry will be a burden.

A woman remembers a blissful childhood in a homeland to which she will probably never return. Filled with trips to a local picnic area with family, they are simple memories. The way her eyes light up when she talks about the food she devoured—olives with warm bread, rice and chicken and rolled grape leaves—you know she can still taste those special days. She tells me she hopes her grown children can experience what her childhood was like someday, so that just maybe all the different seasonings in her mind—memories strewn about as in a messy kitchen—can once again be added together to make a feast of flavors for all to enjoy.

Then there are the stories that break your heart so you can feel the pieces sinking to your toes. The seriousness of their tone almost seems unreal; you want them to become angry, to cry and to scream. They are calm; their faces show no signs of the pain they explain; and their bodies seem motionless, stuck somewhere between a world they want to forget and the only world that truly understands them. Some have visible scars they carry from a memory that will be etched into their souls forever, more so than their faces. You might never know that they ran away from genocide in Darfur, were shot at while trying to cross the Syrian border or have hearing loss from being close to a car bomb going off in Baghdad.

A student stands up in front of the class and thanks his fellow peers for the chance to speak, as all do when given the chance to express their opinions. He is serious as he talks about his hopes and ambitions for the future. He wants to study human rights law so he can help his fellow countrymen back home, a lofty goal. As serious as ever, he continues, “I will bring justice on those who hurt my people, and I will kill them all as they killed us.” It’s difficult to find forgiveness when all you remember is the hacking of machetes and blood pouring out like a raging river, which will come out, as from the mouth of a raging river, through the mouth of a man who remembers only the streams of pain in his memory as the source of his current situation.

To be honest, I always had trouble believing in the power of the oral story. How could a single person have that kind of power over people? Did hundreds of people really go listen to one man speak, preach, teach in parables and stories that the common people would understand? Did these people actually remember what he said, enough so they could pass on the stories and eventually write them down to still be read to this day by billions of people across the globe?

That is the raw power given to stories in this area called the Holy Land that I never truly understood until I began hearing them. This is what made me truly understand why Jesus used stories to teach the crowds gathered from all over the area, the area that I have called my home for the past year.

It did not matter to Jesus where or when he taught, nor does it matter to me where or when I hear these stories. I have come to realize that what matters is how the stories are told. It is the words that make them come alive, that make the stories living, breathing entities. Jesus originally breathed life into his parables, and we who continue to tell and listen to stories follow his example and by doing so become the living Jesus in this world.

I had trouble believing this until I began interacting with the many vibrant and welcoming refugee communities in Amman. When someone asked me why he did not get a visa even though he was promised one by the government in exchange for translating and risking his life; when I heard of a student’s house being demolished by a bomb; and when a student messaged me that he could not come to class because his best friend was just killed back home and he needs to grieve. These stories take me on a pilgrimage that helps me draw nearer to my faith and my understanding of Jesus, both historical and living.

I remember every story, every person who let me in to their lives, if only for a few minutes. Their heights, weights, skin colors and clothing styles are all unique. They come from different countries, different religions and different situations. Yet they show me the commonality and beauty of humanity through their stories.

Sometimes they tell me stories I would rather not hear, and I can imagine the ending before they utter the words. I listen, I learn and I bear witness to stories I would once consider shocking. I want to go forth and spread their news. As outcasts in society, they teach me everything about society. They show me through their stories the good and the bad and the need for reconciliation, peace, love and forgiveness. To me, the refugees in Amman are the living Jesus. We can all learn from them if we just take the time to listen.

Elena Habersky graduated from Scranton University in 2013 and has been working with urban refugees in East Amman, Jordan, since arriving in September 2013 in a Fulbright English Teaching Assistant program.