Sign of God: What Catholics can learn from deafness 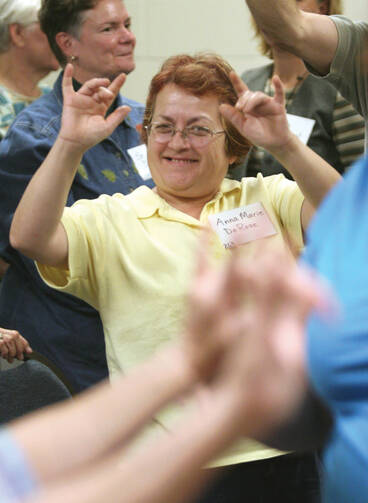 When Moses received his call to lead the people of Israel out of slavery, he said, “Please, Lord, I have never been eloquent…. I am slow of speech and tongue” (Ex 4:10). But God was not deterred. God supplied Moses with miraculous visual signs and appointed his brother Aaron as a voice interpreter for orations.

God, it seems, wanted Moses to preach to his people, so God made some special accommodations. This story is often on my mind when I attend St. Francis of Assisi, a predominantly deaf congregation in Landover, Md., where Joseph Bruce, S.J., one of the first priests in the world who has been deaf since childhood, signs the Masses. It is also where my daughter attends catechism classes in sign language. In order to embrace the Catholic faith, my daughter needed to receive direct communication in a language she could see and understand. In signing the Mass, Father Joe, as he is known, opened my daughter’s eyes to essential practices of Catholicism. Every week Father Joe is able to hold the rapt attention of the entire congregation, even when he does not speak at all.

Since I have long been interested in both eloquence and deafness, I decided to ask Father Joe about his call to the priesthood and his celebration of the Eucharist. In the process I discovered that deafness is an opportunity for all Catholics to learn about the Mass and the priesthood in profound and unexpected ways.

Like most boys in his Springfield, Mass., neighborhood, Joe wanted to be an altar boy. But he could not hear the Latin words of the Mass and even reading them was difficult. Deaf children require significant early intervention and persistent work to have the academic success of their peers in spoken and written languages. By the time Joe was 6, in 1953, he had moved away from his family. He lived at The Clarke School, a boarding school for the deaf that emphasized mainstreaming and used an oral/aural method of communication instead of American Sign Language. When he came home for holidays, Joe was eager for his younger brother Andy to teach him the Latin responses so that he, too, could become an acolyte. After two years of hard work, Joe reached his goal.

Later Joe enrolled in mainstream classes at Cathedral High School in Springfield and then attended the College of the Holy Cross, a Jesuit institution in Worcester, Mass. He wanted to major in Spanish, but the department would not allow it because he “could not hear Spanish.” The choice to study Spanish was a strategic one for Joe, since memorizing words and writing responses on the board was an easier way for a deaf student to get a good grade. For the same reason Joe could have studied math, but numbers were not his strong suit. He ultimately decided to major in English, which proved difficult because of the sheer quantity of reading and writing required. He also felt anxiety about what might happen when the English department found out he could not hear English.

Joe showed dedication to his studies, and his faith life remained strong, yet it was isolating to be the only deaf student at Holy Cross. He wished for someone who understood his experience, even hoping one of his Jesuit teachers might be deaf. One man, however, understood Joe’s experience on a deeper level. Joseph LaBran, S.J., a chaplain at the college, asked him, “Why not become a Jesuit priest?” Joe responded with hesitation, much like Moses: “But the church does not allow deaf men to be ordained.” Father LaBran responded that God is full of surprises.

For the time being, Joe set his mind on a master’s degree in deaf education from Canisius College, another Jesuit school. There he learned sign language and mentored deaf youths hungry for knowledge and communication. But he began to feel a call to the priesthood and applied to enter the seminary. Others were deaf to his call. His diocese said no. The Dominicans did not answer. Finally the religious order that educated Joe accepted him, and Joe went on to become the first deaf Jesuit priest.

Joe is one of eight deaf priests in the United States today and one of only 13 worldwide who had childhood hearing loss that influenced language development. The Pontifical Council on Healthcare Ministry reports there are more than 278 million deaf people in the world, including at least 1.3 million Catholics. Considering that deafness is a language difference and physical condition that will not go away anytime soon, the church needs more priests who can minister to this group. Receiving religious education and accessible services can be a major challenge for deaf children and their families, since many parishes cannot afford interpreters for sacramental preparation. A child or adult who has been deaf since birth necessarily requires a different way of learning than hearing people, who can communicate easily in spoken languages.

Catholics who are learning the new translation of the Mass might consider what can be learned from parishioners who are intelligent and desire to participate but who cannot hear the Mass and may have trouble reading the texts. Catholics are deeply versed in signs: signs revealed in Scripture, the sign of the cross, liturgical colors and other seasonal symbols, relics and of course the sacraments themselves, to name only a few. The Eucharist is certainly the sign of signs, and Christ, the Logos, is both a sign and the One he represents. But what exactly is a Catholic sign and what makes a sign acceptable for use in the Mass? St. Augustine in De Doctrina Christiana describes a sign as “something which, offering itself to the senses, conveys something other to the intellect.” In other words, a sign represents something else to the mind through the senses. For Catholics, it is essential to understand that human beings themselves can be signs of God—in the story of their lives and in the way they communicate. Christ himself succinctly used story and visual signs in abundance.

When Father Joe presides at Mass, I am often moved to wonder by the bodily—one might say fleshy—quality of his language. At St. Francis of Assisi, Masses are simultaneously spoken and signed by Father Joe, and lectors often interpret the Scripture readings in American Sign Language. In the eucharistic prayer, Father Joe allows the visual sign language to lead the pacing and diction of the spoken English. The point of vernacular Masses is to communicate in ways that make it possible for people to understand. This is especially important for the deaf, who often have difficulty processing written language at the same speed as hearing people. Attending a signed Mass, however, is instructive for all Catholics. All 20 or 30 St. Francis parishioners follow every word with the rapt attention demanded by a visual, signed language. The interpersonal connection between the priest and the people is palpable.

Father Joe’s signed vocabulary provides the congregation a feeling of visceral involvement in the celebration. “Look not upon our sins” he says in long-trained but undeniably deaf pronunciation. At the same time, he stretches one hand far above his head with two fingers pointing down to represent the eyes of God and wags the other hand’s index finger “no” from below. Sign language is indexical, pointing and using space in ways that make the audience identify their physical bodies with the acts of celebration and prayer. Facial expressions and body language are drawn in as essential elements of meaning. In a signed Mass the words of worship feel more like a state of being than a spoken string of words.

For a priest who never heard a homily growing up, and who claims he has no models for style other than his inner intention to communicate the faith, Father Joe is a master homilist. He is eloquent. He can strike a chord that perhaps can be struck only by a deaf priest addressing an audience that includes deaf listeners. “How many senses do you have?” he asks. Most have four, and a couple of deaf-blind individuals have only three and use tactile interpreters. “What do you think is the most important sense?” he continues. People respond “Hearing!” or “Seeing!” But “touch,” Father Joe preaches, “is the most important sense.” His poetic signs amply demonstrate the point. The baby (rocking motion of the arms) feels the closeness of the mother’s body (hands touch his torso). The touch of Jesus heals the blind man (hands wipe the eyes and show us “open”). The body of Christ is broken, and we receive it in an unexpected form. In sign language, Christ’s body is physically associated with the listener’s body, something immediately accessible through human touch. Father Joe’s delivery is more interactive, reminding priests and congregations alike that the intimate communicative function of a homily is to bring divine meaning to the mundane lives of listeners.

Marlana Portolano is associate professor of rhetoric at Towson University in Maryland. She is writing a book on deaf ministries and eloquence in deaf preaching.