Reality Check: A fact-based assessment of vocations to religious life 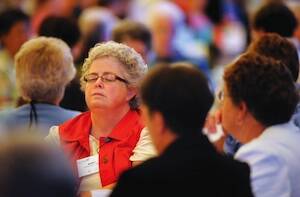 The announcement last April of the results of the doctrinal assessment of the Leadership Conference of Women Religious by the Vatican’s Congregation for the Doctrine of the Faith has provoked strong reaction both inside and outside the Catholic Church in the United States. In the process, some commentators have made assertions about the demographics of religious life in the United States that are not based in fact. Regrettably, these misinformed statements create dichotomies that not only mask the complexity of religious reality, but are patently false. In an article entitled “The Sisters: Two Views,” published in June on the Ethics and Public Policy Center Web site, for example, George Weigel wrote: “In any case, there can be no denying that the ‘renewal’ of women’s religious life led by the L.C.W.R. and its affiliated orders has utterly failed to attract new vocations. The L.C.W.R. orders are dying, while several religious orders that disaffiliated from the L.C.W.R. are growing.”

We believe that the church and the U.S. public deserve an accurate picture, devoid of distortions, ideology and fatalism, of the complex demographics of religious institutes. These demographics are among the most serious issues facing religious life throughout the universal church. A discussion of them demands the greatest precision and sensitivity for the sake of the future of individual institutes, each of which has been entrusted by the Holy Spirit with a unique charism and mission, and which prayerfully deals with issues of revitalization in their general chapters and other deliberative bodies. Precision and sensitivity are also demanded for the sake of the contributions that institutes of women religious continue to make to the church and society, both nationally and internationally.

The information on religious life we report here comes from U.S. data published in the Official Catholic Directory, statistics for the church worldwide published in the Statistical Yearbook of the Church and a study of religious institutes in the U.S. in 2009 by the Center for Applied Research in the Apostolate at Georgetown University and commissioned by the National Religious Vocation Conference.

As of 2009, there were 729,371 sisters, 54,229 brothers and 135,051 religious priests in the world. These overall figures, however, mask a wide variation: some countries have experienced a decline in recent years, while in other countries the number of religious has increased.

CARA’s statistics for the United States show 55,944 sisters, 4,606 brothers and 12,629 religious priests in 2010. As commentators note, there has been a decline in the total number of religious in the United States since the peak in 1965. But the difficulty with that commonly cited starting point is that it represents an exceptional period in U.S. Catholic history (the 1950s and 1960s). Never, before or since, have numbers serving in vowed and ordained ministry been as high. A longer view, say across the entire 20th century, shows just how unusual that 20-year period was. In 1900 the United States had almost 50,000 sisters. According to the Official Catholic Directory, the number of sisters peaked at 181,421 in 1965. This was an astounding increase of 265 percent in just 65 years.

While the reasons for this unusual growth have been much discussed, the reasons for the drop-off after 1965 are more speculative. What we find interesting in the most current research on religious life are those aspects of the generational data that are usually not mentioned. These data, from the recent N.R.V.C./CARA study of recent vocations to religious life, show that simplistic generalizations mask complex realities. We are just beginning to explore some of the key factors that attract women to and dissuade them from religious life today.

The N.R.V.C./CARA study surveyed all religious institutes based in the United States. It received completed responses from about two-thirds of them; these responses, however, account for well over 80 percent of all women and men religious in the United States. Among responding institutes of women religious, L.C.W.R. members make up two-thirds of all respondents, institutes belonging to the Council of Major Superiors of Women Religious (C.M.S.W.R.) make up 14 percent, and 1 percent belong to both groups. The remaining fifth are contemplative monasteries or newly formed religious institutes ineligible for membership in either leadership conference.

3) A sizable proportion of L.C.W.R. and C.M.S.W.R. institutes have no one in formation at the present time (32 percent and 26 percent respectively). This, of course, does not preclude these institutes having new members in the future.

5) The vast majority of both L.C.W.R. and C.M.S.W.R. institutes do not have large numbers of new entrants. Instead of focusing a media spotlight on a few institutes and generalizing inaccurately from them, it is essential to probe what is happening across the entire spectrum of institutes to understand the full complexity of religious life in the United States today.

Adding It All Up

The ecology of religious life in the United States, with more than 1,000 sisters in formation programs in institutes of women religious, deserves a nonideological analysis. And the diversity of charisms of the hundreds of religious institutes in this country needs to be acknowledged as a profound gift to the church. The new generations of Catholics who have come to religious life in recent years bring all that has shaped them—their experience of God, the church, religion and spirituality, family, ethnicity, education, occupational and professional life and more. The analysis of their discernment of a vocation to religious life is anything but simple.

Their choice of a religious institute, like religious life itself, does not exist in a vacuum. Indeed, the church backdrop against which these demographics are displayed is complex and often conflicted. An analysis of the multiple environments in which religious life is embedded is essential in order to trace interactions that have contributed to the current state of vocations to religious institutes in this and other nations. Most critical in this regard is the analysis by Patricia Wittberg, S.C., of data that point to fewer younger U.S. Catholic women practicing their faith (America, 2/20/12). Since a significant number of young adult Catholic women have fallen away from religious practice, religious institutes have the challenge of trying to recruit women who are also struggling with their deep ambivalence about the church. This is an issue that belongs to the entire church, not just to religious institutes.

Given the tension regarding the church and young women, attention must be directed to those places that hold the promise of new life. To that end, questions need to be posed: What will religious institutes have to do in order to build and sustain more multicultural communities and institutes that look like the youth and young adults of the church in this country? What structural and cultural changes will have to take place to ensure a future for new generations of religious, whose cultural mix will look very different from the dominant generations in religious life today? And what is the responsibility of the wider church to the vocation efforts of religious institutes?

The Jesuit scientist and theologian Pierre Teilhard de Chardin was sociologically astute when he said, “The future belongs to those who give the next generation reason to hope.” We believe that the figures we report here show that there is both hope and challenge in the full complexity of religious life in the United States today.

Patricia Wittberg
Show Comments (
6
)
Comments are automatically closed two weeks after an article's initial publication. See our comments policy for more.
T Varghese
9 years 2 months ago
I did a simple calculation. The following are my results.
LCWR affiliated members attract 1.5 candidates every 1000 religious.
On the other hand, CMSWR attracts 7.68 candidates every 1000 religious.
* 2009 , 2011 figures used for calculation, sourced from wikipedia and this article.
When these figures is compared to the death rate at these institutions, it takes little thougt to answer the question, who will extinct sooner?
Wikipedia says, "the membership of the congregations in the LCWR declined from 60,642 in 2007, to 46,451 in 2011, to an estimated 43,664 in 2012."
That is bad news for the Church if these figures are true.
Lisa Weber
9 years 2 months ago
"The future belongs to those who give the next generation reason to hope." - true enough.  The dismal recruitment figures for religious vocations says a lot about how little hope or joy people see in a religious vocation.  Personally, I can see why a person might want to be a priest, but I can't imagine why anyone would want to be a nun.  Dedicating one's life to the service of God or the Church is one thing, living the life of a nun is something else entirely.

We need a different model for service to the Church for women - something with more complexity and interest than the usual jobs reserved for women.  It doesn't have to be paid work, it just has to be interesting.  Many things about church are interesting, but not enough of it involves women, particularly laywomen.
Robert O'Connell
9 years 2 months ago
There seem to be  two issues.  At first this article addresses the numbers of vocations to LCWR and CMSWR institutes, seemingly for the purpose of discredting George Weigel; the cited numbers may show that his quoted statement is overly broad but they still seem to me to do more to buttress than undercut his conclusion as to which institutes are growing.  Then a second point is made: young women are falling away from the Church.

Why not simply identify what factors correlate with vocations so that we know what works as opposed to quibble over who is failng at the greatest rate?  By any criteria, more souls follow a secular, if not pagan, path than choose holiness within our Church(es).  I see a need for myself to pray more, love others more, serve others more, and celebrate with joy the gift of life God gives me every morning. He'll get the numbers He "needs" no matter what.

Why don't the authors wish to identify themselves as Sisters, as in, Sr. Mary Johnson and Sr. Patricia Wittberg?

Your statement that CMSWR congregations are attracting more young women is not true.  The two groups are attracting about equal absolute numbers.  But the fewer traditional congregations are drawing proportionally more.  The distinction matters.
J BYRNE
9 years 1 month ago
Using the figures as reported in the article, we can see that of all people in official religious life worldwide 74% are women.  Given that women have been excluded from ordination and, thus, access to positions of authority within the Church, we speculate that if women were admitted to ordination, their numbers in religious life would increase and our Church would be the better for it.