Misdirections: Ten sure-fire ways to mix up the teachings of Vatican II

Misdirections: Ten sure-fire ways to mix up the teachings of Vatican II 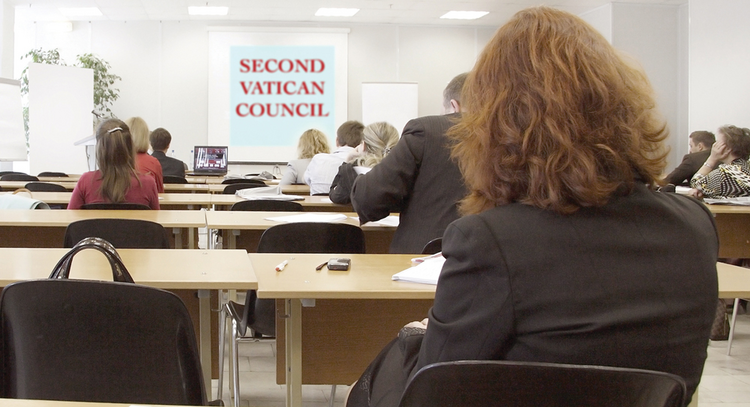 It is not easy to interpret any great event, so it is not surprising that today there is disagreement about how to interpret the Second Vatican Council. Here, I want to turn the issue around to indicate how not to interpret it. (Of course, astute readers will see that this is just a sneaky way of making positive points.) Some of these principles are, in fact, of direct concern only to historians or theologians. The issues that underlie them, however, should be of concern to all Catholics who cherish the heritage of the council. These 10 negative principles are simply a backhanded way of reminding ourselves of what is at stake in the controversies over the council’s interpretation.

1. Insist Vatican II was only a pastoral council. This principle is wrong on two counts. First, it ignores the fact that the council taught many things—the doctrine of episcopal collegiality, for instance, which is no small matter. It was thus a doctrinal as well as a pastoral council, even though it taught in a style different from previous councils. Second, the term can be used to suggest an ephemeral quality because pastoral methods change according to circumstance. Wittingly or unwittingly, therefore, “pastoral” consigns the council to second-rate status.

2. Insist it was an occurrence in the life of the church, not an event. This distinction has currency in certain circles. Its import is best illustrated by an example: A teacher is given a year’s sabbatical, which she spends in France. The experience broadens her perspective. She returns home enriched, but she again takes up her previous routines. Her sabbatical was an occurrence. But suppose she, instead, is offered a position as dean at an institution other than her own. She pulls up stakes, moves, gives up teaching and in her new job learns new skills and makes new friends. That is an event, a significant turn in the road.

3. Banish the expression “spirit of the council.” Sure, the expression is easily manipulated, but we need to recall that the distinction between spirit and letter is venerable in the Christian tradition. We should therefore be loath to toss it in the dust bin. More important, spirit, rightly understood, indicates themes and orientations that imbue the council with its identity because they are found not in one document but in all or almost all of them. Thus, the “spirit of the council,” while based solidly on the “letter” of the council’s documents, transcends any specific one of them. It enables us to see the bigger message of the council and the direction in which it pointed the church, which was in many regards different from the direction before the council.

4.Study the documents individually, without considering them part of an integral corpus. I cannot name anyone who insists on this principle, but it has been the standard approach to the documents ever since the council ended. Of course, to understand the corpus one must first understand the component parts. Hence, study of individual documents is indispensable and the first step in understanding the corpus. Too often, however, even commentators have stopped at that point and not gone on to investigate just how a specific text contributed to the dynamics of the council as a whole, that is, to its “spirit.” Without too much effort it is easy (and imperative) to see the relationship in themes and mind-set, for instance, between the document on religious liberty and the document on the church in the modern world.

5. Study the final 16 documents in the order of hierarchical authority, not in the chronological order in which they were approved in the council. The documents, of course, have varying degrees of authority (constitutions before decrees, decrees before declarations). But this principle, when treated as exclusive, ignores the intertextual nature of the council’s documents—that is, their interdependence—one building upon the other in the order in which they made their journey through the council. The document on the bishops, for instance, could not be introduced into the council until the document on the church was fundamentally in place, especially because of the crucial importance of the doctrine of collegiality being debated in the “Dogmatic Constitution on the Church.” The documents, therefore, paraphrased, borrowed from and adapted from one another as the council moved along. Thus they form a coherent and integral whole and need to be studied that way. They are not a grab bag of discrete units. To toy with one of the documents, therefore, is to toy with all of them. (Unfortunately, the latest edition of the widely used translation of the council’s documents, edited by Austin Flannery, O.P., prints them in hierarchical, not chronological, order.)

6. Pay no attention to the documents’ literary form. A feature that most obviously distinguishes Vatican II from all previous councils is the new style in which it formulates its enactments. Unlike previous councils, Vatican II did not operate as a legislative and judicial body in the traditional sense of those terms. It laid down certain principles but did not, like previous councils, produce a body of ordinances prescribing or proscribing modes of behavior, with penalties attached for nonobservance. It tried no ecclesiastical criminals and issued no verdicts of guilty or not guilty. It most characteristically employed a vocabulary new for councils, a vocabulary filled with words implying collegiality, reciprocity, tolerance, friendship and the search for common ground. Instead of ignoring this distinctive feature, explanation and analysis of the documents’ literary form seem to be indispensable for understanding the council.

7. Stick to the final 16 documents and pay no attention to the historical context, the history of the texts or the controversies concerning them during the council. This principle allows the documents to be treated as if they float somewhere outside time and place and can be interpreted accordingly. Only by examining the travail that the decree on religious liberty, for instance, experienced during the council, to the point that it seemed it could not be approved, can we understand its path-breaking character and its significance for the church’s role in the world today. Moreover, there are official documents beyond the 16 that are crucial for understanding the direction the council took—such as Pope John XXIII’s address opening the council, “Mother Church Rejoices,” and the “Message to the World”—that the council itself published just as it was getting under way. These two documents opened the council, for instance, to the possibility of producing “The Church in the Modern World.”

8. Outlaw the use of any “unofficial” sources, such as the diaries or correspondence of participants. No doubt, the official sources—the final texts and the multivolume Acta Synodalia, published by the Vatican Press—are and must remain the first and most authoritative point of reference for interpreting the council. But the diaries and letters of participants provide information lacking in the official sources and sometimes better explain the often sudden turns the council took. Making use of such documents is not an innovation in scholarship. The editors of the magnificent 13-volume collection of documents concerning the Council of Trent, the Concilium Tridentinum, did not hesitate to include diaries and correspondence, which have proved indispensable for understanding that council and are used by all its interpreters.

9. Interpret the documents as expressions of continuity with the Catholic tradition. As an emphasis in interpreting the documents of the council, this is correct and needs to be insisted upon. The problem arises when this principle is applied in a way that excludes all discontinuity, that is, all change. It is an absurdity to believe that nothing changed, nothing happened. On Dec. 22, 2005, Pope Benedict XVI provided a correction to such exclusivity when he said in his address to the Roman Curia that what was required for Vatican II was a “hermeneutic of reform,” which he defined as a “combination of continuity and discontinuity at different levels….”

Show Comments (
4
)
Comments are automatically closed two weeks after an article's initial publication. See our comments policy for more.
Paul Ford
7 years 8 months ago
Magnificent, Father John. Thank you.
Charles Erlinger
7 years 8 months ago
Good advice. Thanks.
ALAN HORTON
7 years 8 months ago
Words period. Not So: "Who controles the past controles the future; who controles the pressent controls the past". The author I am sure is a great person, as "I AM". The author is as I who cannot stop breathing. Opinion period. Give the Man credit, the mystery of life is ours to live, a free will gift, we are disobedient humans. Vatican ll is more than words of ours. Pope John XX lll, gathered the reasons by listening to the people in the fields working the land to call the council. Not as Pope. Not untill he was voted to be Pope did he hear the memories of those in the field,working the land did he go outside the Walls of the Vatican to call the Second Vatican council to be. Love living by living love, Alan
Craig McKee
7 years 8 months ago
Quelle surprise! "(Unfortunately, the latest edition of the widely used translation of the council’s documents, edited by Austin Flannery, O.P., prints them in HIERARCHICAL, not chronological, order.)" Mirabile visu! The older NON-HIERARCHICAL edition is going for a whopping 400 bucks on amazon! http://www.amazon.com/gp/offer-listing/081460885X/ref=tmm_mmp_new_olp_sr?ie=UTF8&condition=new The Jesuit vs. Dominican editions apparently provided bones of contention from the outset: http://www.catholicculture.org/commentary/otc.cfm?id=589 Luckily for the anglophone inhabitants of the planet, VOX CLARA was involved in none of them!
Advertisement

This article also appeared in print, under the headline “Misdirections,” in the February 4, 2013, issue.

John W. O’Malley, S.J., university professor in the theology department at Georgetown University, is author of The First Jesuits and What Happened at Vatican II (Harvard Univ. Press).