To the Ends of the Earth: Faith at work around the world 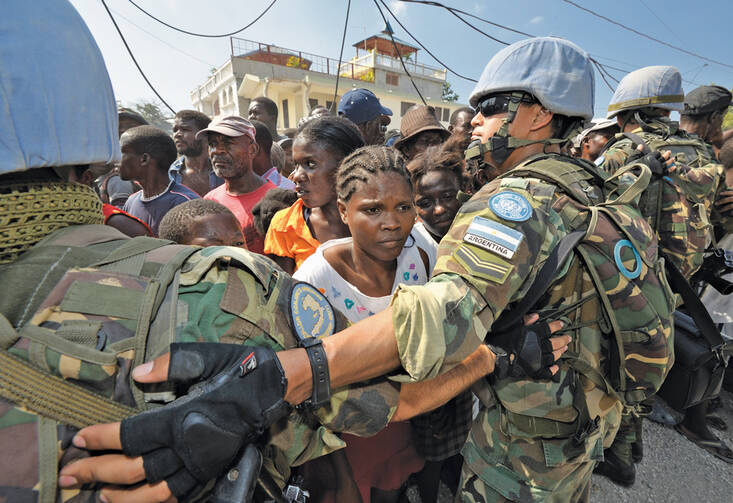 The Haitian aid workers arrived with several truckloads of relief supplies—tents, blankets and the like—at an isolated area outside the capital of Port-au-Prince, which, more than a week after the January 2010 earthquake there, still had not received any assistance.

The workers for the Lutheran World Federation had done their best to make sure the distribution went smoothly. But on the day of the distribution, any sense of order collapsed when a group of young men who were not on the list of recipients demanded some of the items and began disrupting the event. Police were called in, and although the young Haitian aid workers held their ground, the situation quickly deteriorated. People rushed the distribution center. A policewoman fired several shots; another person brandished a shotgun and people scrambled. Luckily, no one was seriously injured or hurt.

At a later debriefing, some of the Haitians wondered if the distribution should have stopped the moment it was clear there might be problems; others said that would not have been fair to those who were rightly in line and had waited patiently. Privately, some of the foreign workers wondered if the young Haitians had not been sufficiently careful or had not laid the groundwork well enough. Some suggested that the aid should have been distributed to whoever needed it.

Some of the things hinted at by the foreign workers—inexperience, a perceived lack of professionalism—are accusations sometimes leveled at those who work for faith-based humanitarian agencies. The real pros, it is sometimes assumed, are those who work for secular groups like the Red Cross and Doctors Without Borders. In Haiti, at least, those groups are seen at the top of a humanitarian hierarchy, followed by the large faith-based groups and alliances like World Vision, Catholic Relief Services and Caritas, in turn followed by smaller church-based groups like Church World Service, and then, finally the smaller mom-and-pop operations, many of them evangelical Protestant.

I can only speak as someone who reports for Church World Service, which has ties to a wide network of other agencies—Protestant, Anglican and Orthodox—but it often seems that some of the more common accusations against faith-based groups cut both ways. In my travels, I have met dozens of workers for faith-based groups who are committed, talented and deeply, deeply professional. And I have met young, inexperienced staff members working for secular groups in tough, demanding places too.

In the end, most of these humanitarian organizations, faith-based or secular, have more that unites us than divides us. And the more prominent faith-based groups I have worked with—like C.W.S., L.W.F. and C.R.S.—are united even more closely. But our bond is not forged over the occasional need to defend ourselves from accusations or a desire to separate ourselves from secular aid groups. Rather, we are united in our shared desire to support very basic humanitarian principles, including refraining from proselytizing, and in the fact that we treat all of those affected by disasters without discrimination or favor. Greatest need is, and should be, the priority for all of us who do humanitarian work, not factors like religious affiliation, political beliefs or ethnicity. Christian commitment undergirds what we do; and while these groups seek to touch hearts, conversion is not part of our agenda.

Yet other faith-based aid groups make no secret that they are also religious-oriented bodies that claim the right of proselytizing, or conversion, to Christianity when they do humanitarian work. This is a key difference among the Christian aid groups, and it is proof that Christianity is an enormous tent. I would not call this so much a squabble as just a very essential and different outlook on how branches of Christianity approach humanitarian work. In fact, in disaster situations like Haiti there is not a lot of interchange between humanitarian agencies of different stripes. Many nongovernmental organizations I have worked with believe that the act of proselytizing is a violation of humanitarian principles. In the other corner, one evangelical I know once told me that while she was impressed by C.W.S.’s work, she felt it was too bad we did not “take the next step” of trying to convert Muslims to Christianity. I strenuously disagreed.

An essential factor that ties all of us together—and why I still choose to work for this kind of church-based organization—is what I can only describe as something marvelously stubborn: It is the sheer durability of the Christian church. Here I am speaking of its deep roots in much of the world and its web of relationships—from parish to town, from congregation to countryside, from hospitals to feeding centers. The Christian church has existed in the past; it is present today; and it will be present tomorrow. The Haitian workers I described worked in Haiti well before the earthquake and are still there now, doing good work three years after the disaster.

Such work is most meaningful when it is done freely and tied to the inherent dignity of our brothers and sisters rather than to the religious claims of one group or another. When I visited northern Pakistan in 2010, the work of my C.W.S. colleagues there (both Muslim and Christian) was appreciated simply for what it was.

I well remember the afternoon I spent with 72-year-old farm laborer Noor Paras, who lived in a village along the Indus River that had been damaged by floods. A quiet and dignified man, Paras knew that the Eid holiday that year was going to be a curtailed, pinched affair with little outward celebration. Yet he appreciated the food packages C.W.S. had provided, calling them “a gift from God.” It did not matter to Paras where the food came from—in emergencies there is no Islamic food or Christian food, but merely survival food.

Here is another example. In late 2011, I visited Kenya and Ethiopia on a freelance assignment for The National Catholic Reporter. While there, I interviewed women religious, priests and humanitarian workers, all trying to ameliorate the effects of a terrible drought and drawn-out humanitarian crisis that had elicited little concern or attention in the United States.

One of my C.W.S. colleagues, Sammy Mutua, told me of an increasingly prominent phenomenon: food crises in urban areas, like Nairobi, where one-time farming families had been forced to leave their land and now found themselves scrambling to find food. This scramble had become part of a trying, difficult life in which people lost the social support they had once had, and cherished, back home.

In the midst of this kind of environment are people like the Rev. Paulino Mondo of Holy Trinity Parish in the Nairobi slum of Kariobangi and Ruth Wanjiru Mbugua, a social worker who works with the Holy Trinity community. Both were doing their best to simultaneously help feed their community (with the help of groups like C.R.S.) and do battle against such long-standing social woes as gun violence. Outside the urban areas, the Rev. Pius Kyule, a priest in the Machakos district, a rural area southeast of Nairobi, was working with C.R.S. to implement a feeding program in an area that was feeling real pressure. Many people struggled just to keep a very basic diet of about one kilo of beans for six people on the table. This crisis of rising food prices and accompanying pressures on increasingly denuded land due to climate change were all taking a significant toll. “It’s getting worse every year, and people are suffering,” Kyule told me.

I am asked sometimes, not surprisingly, how a loving God can allow such suffering. The question arises everywhere, not only in the Horn of Africa but in other places where I have worked—Sudan, Indonesia, Afghanistan, Central America and the war-torn Balkans, to name just a few.

To be honest, the question has never meant as much to me as has the privilege of seeing so many people like my Kenyan brothers and sisters simply doing their jobs, often unheralded, as they work to alleviate that suffering. Kenya was far from the worst situation I have seen, but it was serious enough, and through years of travel guided by such inspirational figures, my own sense of faith has deepened because I know they, as the church’s representatives and workers, are struggling in the vineyards, are present and will continue to be present when others have left Kenya and other places. That is where God is, I tell people. And if these humanitarian efforts are part of a web of relationships undergirded by 2,000 years of tradition and history, all the better.

Often this work is incremental, partial and imperfect—like the aid delivery in Haiti that went awry. Aid groups need to work to minimize such failures, of course. But as someone who with age has become less open to “grand schemes” and is more fully aware of life’s limits and snares, I believe we should not be afraid of partial or imperfect efforts, even as we strive always to do our best, our most excellent work.

We have guideposts for this. Among my colleagues at C.W.S., there is a popular prayer that is often attributed to one of my clerical heroes, the martyred Archbishop Oscar Romero, though it was in fact composed by Bishop Kenneth Untener of Saginaw, Mich. It speaks about the ways in which our works are always incomplete and that “the kingdom always lies beyond us”:

We cannot do everything, and there is a sense of liberation in realizing that. This enables us to do something, and to do it very well. It may be incomplete, but it is a beginning, a step along the way, an opportunity for the Lord’s grace to enter and do the rest. We may never see the end results, but that is the difference between the master builder and the worker. We are workers, not master builders; ministers, not messiahs. We are prophets of a future not our own.

Workers, indeed, imperfect as the institutions we work for. But we are present, doing our best and, we hope, doing some good in the world, however partial.

Chris Herlinger, a writer for Church World Service, is a New York-based freelance journalist who writes frequently on humanitarian issues for The National Catholic Reporter and Catholic News Service. He is the co-author, most recently, of Rubble Nation: Haiti’s Pain, Haiti’s Promise.