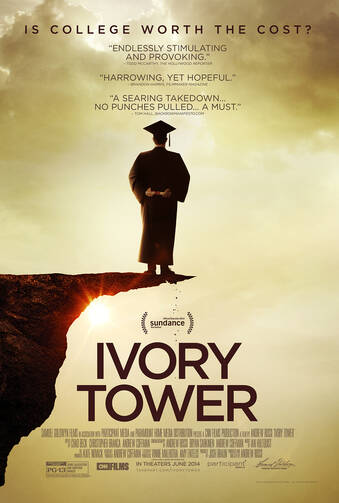 A lot is wrong with higher education in America but plenty more is right. If its economic problems can be dealt with, there’s reason to be optimistic about the future. Only time will tell. That’s the take-away from Ivory Tower, an informative if somewhat complacent documentary by director Andrew Rossi ("Page One: Inside the New York Times").

Asked to identify the biggest threat to our academic system, most informed observers would say: College is too expensive, takes too long (which adds to the cost) and probably isn’t worth it for the majority of graduates because there are too few jobs remunerative enough to enable them to pay off their loans. Since 1978, college tuition has risen 1,120 percent in absolute dollars, outpacing inflation and the cost of food, fuel, housing, etc. Aggregate student loan debt is $1 trillion, more than the nation’s credit card debt.

According to the film, the primary cause of this untenable state of affairs is that schools have adopted a corporate business model that “promotes expansion over quality learning.” The race to add programs and facilities at four-year, residential universities has led to soaring costs, bloated administrative staffs and increased institutional debt, which is then passed along to students and their families through tuition and fees.

Students are treated like consumers and academic rigor is deemphasized. Large state schools have created “party pathways” that allow undergrads to coast academically while providing them with luxury accommodations and amenities. (This helps explain another startling statistic: 68 percent of students at public universities fail to graduate in four years.) Revenue is boosted across the board, including by attracting wealthy out-of-staters who are charged full tuition on top of what they willingly shell out for gourmet food, round-the-clock pool parties and in-suite massages.

Even schools with reputations for valuing scholarship strike this sort of bargain with their students. When so much emphasis is placed on job prospects and earnings, these colleges are increasingly compelled to offer services and opportunities (albeit of a less hedonistic variety) designed to give their students a competitive edge, which also drives up costs and debt.

Moreover, the pressure isn’t simply coming from the outside, by, say, parents demanding value for their financial outlay. It’s in a school’s interest to foster a well-heeled donor base and to enhance the prestige of its brand by facilitating success in myriad arenas—in business, on the athletic field and even within academia. In sum, we have the system we deserve, for better and worse.

All in all, Ivory Tower is balanced and comprehensive, though more mention should be made of so-called middle-tier universities and smaller, rural colleges, which will likely be in the most jeopardy when the tuition-and-debt bubble bursts. Using spiffy graphics, handsome talking heads, glossy cinematography and reassuringly sophisticated background music, Rossi pulls back the curtain only so far. In the only politically charged segment, the Reagan revolution is blamed for triggering a shift from education being considered a “public good” to a “private good” and for the decline in public financing for higher education.

Rossi is determined to maintain an aura of journalistic objectivity but his preferences still come through. Early on, his cameras are in Harvard Yard (where he earned a law degree) to show us, in the words of Harvard’s own Professor Clayton Christensen, the “DNA of American higher education” and to meet members of the class of 2016 as they navigate a mandatory freshman course in computer science.

Considerable screen time is devoted to a crisis at New York City’s Cooper Union, which recently decided to charge tuition for the first time since its founding in 1859. The land under Manhattan’s Chrysler Building (cue aerial shots of its art deco spire) is part of the school’s endowment. Unfortunately, bad investments and a $175 million loan for the construction of a new campus building helped scuttle Peter Cooper’s legacy of providing a free education.

This saga doesn’t warrant the amount of attention Rossi gives it, since Cooper Union’s financial structure is, or rather was, sui generis. Still, it’s dramatic and we do discover that undergrads can still become impassioned and take bold action when they learn they’ll no longer be getting something for nothing.

“Ivory Tower” profiles several interesting alternatives to college with roots in Silicon Valley. The Thiel Fellowships promote entrepreneurship by paying recipients to forgo college and start a tech business. And the nascent “UnCollege” movement encourages young people to “hack” their educations rather than enroll in college. Alas, the fellowships aren’t scalable and the DIY approach seems risky and quixotic.

Massive Open Online Courses were pioneered by Stanford professors and would appear to be a more viable option. At the urging of California governor Jerry Brown, San Jose State University tested the waters by partnering with Udacity, a private company that designs MOOCs. By all accounts, it was a failure. Student’s performed worse than they had in a traditional classroom setting.

While online learning is far from a panacea, technology will play a major role in higher education going forward. Toward the end of the film, a hybrid project combining online and face-to-face learning at Boston’s Bunker Hill Community College is touted as an effective teaching model and as one way to keep college-level instruction affordable and accessible.

Accessibility is a key concept in this context. The goal of educating the maximum number of citizens is essential to a healthy democracy. Any suggestion that we should limit access to college—in effect, roll back the education franchise—is considered elitist or worse. However, if the system is allowed to collapse, millions will be shut out. Something’s got to give.

While “Ivory Tower” doesn’t address curriculum reform, it strikes me that rethinking what is being taught might be the least onerous way to start releasing some of the pressure. It would probably result in a net contraction of the higher education sector. Departments, disciplines and entire institutions could disappear. But isn’t that preferable to a more financially and pedagogically impoverished citizenry?

For any positive change to occur, the notoriously fractious constituencies within colleges and universities would have to set aside differences and accept compromises. Ideally, the process would lead to more tolerance for opposing viewpoints and a healthy focus on an institution’s mission, values and culture. Greater transparency about governance, admissions and a range of other sensitive issues would be a welcome byproduct.

Because it gently lauds the benefits of in-person teaching, learning communities of “constant engagement” and the necessity of “critical thinking,” “Ivory Tower” serves as an eloquent defense of the strengths of a liberal arts education. It begins and ends in the upper echelons of academia where Andrew H. Debanco, Julian Clarence Levi Professor in the Humanities at Columbia University, wistfully ruminates on the virtues of American higher education.

But Rossi gives himself the final word and, with it, brings viewers back down to earth where the air is less rarefied. As the end credits role, a title card reads: “Learn about managing student debt and how to change the system at: takepart.com/ivorytower.”