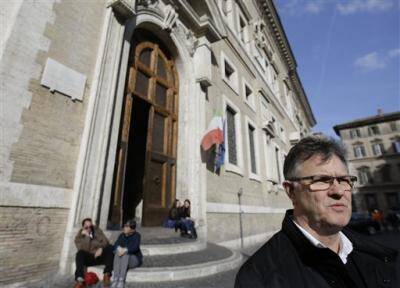 Whatever the merits of the decision, the optics of removing one of the two survivors of clerical sexual abuse serving on the Holy See’s Pontifical Commission for the Protection of Minors were not good. Peter Saunders, the founder of the U.K.-based National Association for People Abused in Childhood, was given a leave of absence following a 15-to-0 vote of no confidence by the 17-member commission (with one abstention) at a meeting in Rome on Feb. 6.

Mr. Saunders had been an outspoken critic of the church’s ongoing efforts to prevent and respond to the abuse crisis; he claimed in the press that Pope Francis had gone back on a promise to attend the commission meetings and criticized the pope’s controversial decision to appoint Bishop Juan Barros, accused of covering up the sexual abuse crimes of a Chilean priest, to the Diocese of Osorno. Following the commission’s vote, Mr. Saunders told The Irish Times, “I cannot be part of something that runs alongside a system that is essentially corrupt and unwilling to do the right thing...protect children.” Other members, including Marie Collins, an abuse survivor, insist that the role of the commission is not to comment or intervene in individual cases but to consider overall church policy and to advise Francis on best practices in fighting sexual abuse. There were concerns that Mr. Saunder’s work as an advocate could interfere with this specific mission.

That may be the case. But having the voice and witness of survivors on the papal commission is essential. Mr. Saunders should be replaced with someone who shares his tragic, firsthand knowledge of this open wound in the Catholic Church.

The Editors
Show Comments (
4
)
Comments are automatically closed two weeks after an article's initial publication. See our comments policy for more.
Richard Booth
6 years 4 months ago
Being a not-so-outspoken critic of the church's approach to children's safety, I do understand many of the different positions held by the church and by victims/advocates. All one has to do is deal in therapy with victims' many complex issues surrounding the betrayal by priests and the institution that protects them. Many of these people are broken, their ideals and, indeed, their worlds, turned upside down. I understand victims' and advocates' rage and helplessness through my relationship as their therapist, though I have not myself been a victim of sexual abuse by priests. My abuse was psychological and came from entitled and ignorant clerics who did not know what they were doing (not a small number, in my experience). While all I have to go on in this case is the information in this article, Mr. Saunders's behavior is understandable. I agree that his replacement should be a very informed victim rather than a cleric. I could write a book!! Don't worry, I won't.
William Rydberg
6 years 4 months ago
Frankly, I don't know why they need to replace him. After all he is temporarily sidelined and may choose at a later date to modify his position (one way or the other-make no difference). Point is that these large groups can get unweildy and I have seen people hide in numbers...
Mary Jane Doherty
6 years 4 months ago
Yes it is important to listen to victims of clerical sexual abuse, be a victims' advocate, and move change. Nearly 15 years into this crisis, it is also imperative to understand change (policy and practice) as important prevention in the present and into the future. That is what the papal commission is about, and as it accomplishes its task through the unwieldy structures of the Vatican, perhaps it will also be able to add another task, or create bridges to Vatican offices who are supposed to be doing that task, namely, addressing the injustices of the past and pursuing justice and punishment as appropriate, for failures of the past. However, the perspective of moving the whole Church forward, opposing these two tasks in the media games and not recognizing what could be a practical need to sequence them is counter productive. If the house is on fire I would, as a woman, first save the kids and the dog so they don't get burned now, and then I'd find out where the failures were in the wiring and hold the electrician accountable. Both tasks are good and necessary; one may have to occur practically before the other, especially if conversion is involved, even as we have discovered and already know now that the house had a history of susceptibility and irresponsibility, a history of previous fires. Unity going forward is important; division is fruitless.
Rosemary McHugh
6 years 4 months ago
As a victim/survivor of clergy sexual abuse myself, I appreciate this thoughtful essay and the understanding that "the voice and witness of survivors on the papal commission is essential". I personally know Peter Saunders. He is a man of integrity. He loves the Church and he loves Pope Francis, even though Peter was sexually abused by two Jesuits when he was a schoolboy in London. If the papal commission is only going to be used as a vehicle to form policy for the future, then there needs to be a way for Pope Francis to deal with problems happening now, if the pope is ever going to gain credibility that he is willing to do the right thing, and protect children rather than protecting bishops and priests. Peter is on a leave of absence by the commission, not by the pope who hired him. I hope and pray that Pope Francis will find a way to integrate Peter back into a Vatican process created for dealing with present problems that include working closely with the secular police around the world, like my case was dealt with by the Archbishop of Dublin, Dr Diarmuid Martin, who sent my case directly to the Dublin police to investigate and the predator priest was removed from ministry. It is the job of the police to investigate crimes in the Church, the pope has enough to do in removing the predator from the priesthood, once the predator has satisfied the requirements of secular, objective law enforcement. I also know Juan Carlos Cruz, another man of integrity, who was raped as a schoolboy by the charismatic predator Fr Karadima in Chile and witnessed by the new bishop who covered up for Karadima. I cannot understand why Pope Francis would appoint such a man and why the pope chooses to ignore the parents in Chile who fear for their children's safety with the presence of this complicit bishop. Maybe the pope does not care to, or have the courage to, do the right thing? Sincerely, Dr Rosemary Eileen McHugh, MD, MSpir