Union Made: A labor strategist's tools include faith, Scripture and social teaching. 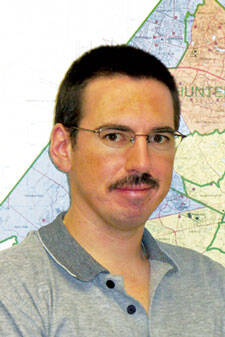 Although my parents never expressed it in so many words, they gave me a pretty clear idea about how they esteemed different callings. Practicing a trade to support a family was good, public service still better and a call to the religious life the most excellent. After all, “If you wish to be perfect…” (Mt 19:21).

As a child I saw my father ply a wide variety of blue-collar jobs. He might be a factory mechanic one year and a truck driver the next, or perhaps run a car wash or a coin laundry. Though we were never poor, neither were we especially prosperous. With significant sacrifices by my parents (and a bit of charity from the “men in black”), I enjoyed a Jesuit preparatory education.

Preparing for what, though? I never suffered the loss of faith or estrangement from the church common in young adults but neither did I feel a religious calling. I will not be perfect. I guess I will be just good enough. For years I drifted through a series of not entirely satisfying engagements as a factory worker, railroad employee and mailman.

It was in these experiences that I began to discern my future vocation. In the factory, I saw the health and safety of my co-workers routinely placed in jeopardy by exposure to dangerous chemicals. At the railroad, I saw the families of co-workers thrown into crisis as a corporate buyout led to mass layoffs. At the post office, I saw how an abusive management corps could turn an otherwise fulfilling job into a source of daily misery for the (generally!) dutiful men and women employed there. Modest crosses, admittedly, but consequential and important elements in my life and those of my companions. Increasingly I was drawn into the labor movement, first as a volunteer and later as my occupation.

I draw a great deal of strength and direction from the study of Scripture and the social encyclicals of the popes. Reading Scripture teaches me humility. Every time I pick up the Bible I find myself baffled by something or other about our mysterious God. Scripture reminds me how little I understand of the highest things, how high God’s thoughts are above my thoughts.

The social encyclicals complement my study of the words of Scripture almost perfectly, offering desperately needed counsel in great clarity. Think of it: Who among the laity enjoys so much guidance in their vocation as I? I searched in vain for passages in the papal letters that might tell one how to be a worthwhile machine operator or railroad clerk or letter carrier. But Leo, Pius, John Paul and Benedict are full of advice on how to be a good trade unionist.

All this definitely makes me a different sort of union representative than many of my colleagues. I hesitate to say better. I lack the passionate partisanship of many of my peers, the certitude that no demand from labor is ever unreasonable and that no concession from an employer is ever enough. Catholic social teaching ignites in me a desire to fight for justice on behalf of the working people I represent, but it also offers a vision in which workingpeople’s associations and employers can come together for the common good. That perspective can be something of a handicap in a world that seems to thrive on conflict.

It is hard to ask workers to sacrifice their particular interests for the common good of the enterprise, but most workers retain a basic sense of fairness that makes the idea comprehensible.

For the management figures I encounter, on the other hand, the notion that a firm might sometimes need to sacrifice profits in the interests of justice for their workers is often wholly foreign. Managers are schooled to believe that their obligations begin with the chief executive officer and end with the shareholders. They consider a firm to be ethical if it merely obeys the law and fulfills its contracts. Pope Leo XIII writes of “a dictate of natural justice more imperious and ancient than any bargain between man and man” that regulates labor relations (“Rerum Novarum,” No. 45). Even the Catholic business leaders I encounter, however, tend to find this notion alien and offer a thousand reasons why it is impractical or absurd. Perhaps it is, but is not the foolishness of God wiser than the “wisdom” of men?

Clayton Sinyai is director of strategic campaigns for the Amalgamated Transit Union and a member of the Catholic Labor Network.

I remember well how my father, who ran a small wood products company in Michigan with five to twenty employees at various times, insisted on an employee bonus program based on collective productivity.  I wonder if some of the same Jesuits who taught Clayton Sinyai also taught my dad (Xavier, Cincinnati)—he frequently referred to Leo XIII.   My mother, who wrote the checks, saw no merit.

I recall how he approved the employees request to cross-substitute hours during deer hunting season.  Later, a number of them sued for the pay differential caused by the inevitable overtime.

Later, when my brother and I ran the factory, we marveled at the ever expanding parade of government employees who called on our modest shop and imposed costs in time and investment finances.  OSHA people walked by the machines we were most  worried about to inspect the table saws they were familiar with.  Others wanted to talk about sawdust.   And the mail brought more government forms.

Then there were the employees who showed up late, or showed up intoxicated or stoned.  One clamped his hand in a jig and couldn’t think to hit the release.  Others just didn’t show up.

We closed the business and went into software and brokerage.   Sales.   Left the headaches of manufacturing and personnel management and government forms behind.

ed gleason
10 years 10 months ago
Employee ownership and profit sharing are tried and true methods of labor peace. Top flight restaurants have a tradition of giving the creative chef an ownership position.. and not be labeled socialists. It would seem that union bashers think that everyone should rely on the good will of owners/management because that is a holy, scared, God infused  law in the economic system.. and they do this without any scriptural/magisterial reference.
Tom Maher
10 years 10 months ago

The labor scenario needs to be updated to a much more realistic 21st century version where labor unions have accumulated enormous economic and political power including the power to destroy or disrupt by strikes whole viable industries  if these industries fail to agree to every demand of labor no matter the impact on the long-term financial health of an industry.

For example the 2009 government takeover of General Motors and Chrysler due to these companies being bankrupt from hugh llabor and pension costs that made these companies uncompetative in the auto market.

Chuck Hendricks
10 years 10 months ago
Clayton great article and Tom Maher, the idea that unions are all powerful ignores reality. In the private sector they are down to 7.5% of employees nationwide. For the past thirty years wages have not kept up with inflation, pensions have been virtually eliminated and fully funded employer health care is nearly eliminated.

If anything at this stage of history it is capital not labor that has the power to shut down the economy. By moving it oversees, automatic the work or creating industries that produce nothing like much of the financial sector.

My experience is the members of unions are rational and realistic and while they might want alot, that what they are willing to actually struggle and push for through things like strikes is only the things that they really need. Like a living wage, affordable health care and basic rights.
ed gleason
10 years 10 months ago
Tom Maher blames unions for GM bankrupcy not their poorly designed/priced cars. Hope Tom drives a Detroit car.. though...
Vince Killoran
10 years 9 months ago
Great article-and a tough job being a union strategist these days. After decades of corporate attacks and living with weak labor laws protecting workers' CB rights, we need the energy and innovative work of union leaders more than ever.
Tom Maher
10 years 9 months ago
Compnies going bankrupt from unions contracts are common in the 21st century.  Just a few days ago American Airlines went bankrupt brought down by the burden of high union labor, benefits and and pesnion costs.  This follows  bankruptcies of United Continental and Delta airlines a few years before.

Bankruptcy is a drastic last resort . But for unionized industries in the 21st century it has become routine and even encouraged by busisiness analysts as the only way to survive as a business.   Businesses have no trouble at all showing the courts that their union contracts greatly exceed their ability to pay the terms of the union contracts.  The courts very predictably then sets aside  the terms of the union contract and imposes drastically scaled back terms that will allow the company to survive and grow.

Bankruptcies in mature industries like the auto industry usually means not only scale backs of wages, benefits and pensions but drastic cut backs in the number of employees.  General Motors cut whole divisions, product lines, distributors in additon to across the board layoffs.  More than 20,000 GM employees were permanently layed off.

The long term trend has been for hundreds of thousands of unions jobs to be lost per decade with almost no union jobs created except for a few in growth industries like the airlines after they come out of bankruptcy.

The economic reality is that ?u?n?i?o?n?? contracts ?kill? off ?jobs.???
Vince Killoran
10 years 9 months ago
Would Tom please provide empirical evidence that a unionized workforce is the direct cause of bankruptcy in our corporate world?