Raise Up the Lowly 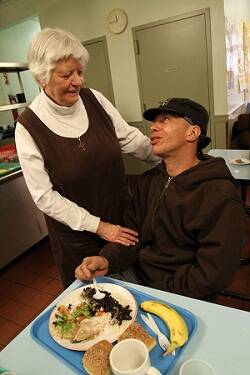 Dawn breaks upon us. The Sun of Justice spreads his warming rays across a dark and icy world. The images of the Christmas season evoke liberation from oppressive times. They announce new life and a new order of things. “Justice and peace embrace.” It is a welcome message at all times, but particularly this year, the fourth since the Great Recession began.

While the official unemployment figures have only just dropped below 9 percent, the unofficial figure may be 16 percent or higher. Recent college graduates cannot find jobs. Discouraged workers have spent years looking for new work without securing it. Many seniors have either lost their pension benefits or have to make due with diminished savings. Governments and families are tightening their belts. Anxiety haunts the land. We sorely need the Light of the Nations to shine into our lives.

Christmas is intended for everyone, but it has a special relevance for the poor and oppressed, for God “lifts up the lowly.” According to the Gospels, Mary identifies herself as a “lowly handmaid.” The shepherds in the Judean hills to whom the angels reveal the good news live on the edge of Israelite society. The Holy Family has to seek out makeshift shelter for the Savior’s birth and then, as refugees, find asylum in Egypt. Later, Jesus begins his own ministry proclaiming “good news to the poor,” and his very first blessings are for the poor and the landless (the meek). These details of the Gospels are intended to appeal to the poor but also to draw the rest of us into their company as the new family of God.

Christmas is time for us to strengthen our bonds of solidarity with the poor, to join in God’s work of raising up the lowly. In the United States of 2011, this solidarity is needed more than ever. In New York City, Mayor Michael Bloomberg is attempting to deny access for single adults to city shelters unless they can prove they have no place else to go. In Maine, where 80 percent of homes are heated by oil, a 60 percent cut in federal subsidies for home heating fuel this year will expose the state’s sizable poor population to the cruelties of a Northeast winter. Using deceptive practices and robosigning legal papaers, banks foreclosed illegally on thousands of homes. After three years of economic distress, we can hardly speak any longer of “a social safety net.” For the poor and resourceless, it is “every man for himself.”

In an environment so hostile to the poor and working people, what can be done to lift up the lowly? How can we participate in Christ’s liberation of the oppressed? First, even as we try to rebuild a dangerously unstable economy, we must resist every effort to blame the victims, whether the poor, workers or Occupy protesters, and instead create a public ethos that favors the common good.

Second, we should demand that government redirect needed spending cuts away from programs for the poor and take them instead from expensive giveaways to commodity producers, hedgefund managers and extravagant purchases of military hardware. If that is not enough, government can institute a Tobin tax on financial transactions, as the Pontifical Council for Justice and Peace recently proposed, to fund poverty reduction and economic development.

Last, we can promote economic policies that, unlike those of the last 30 years, hold economic inequalities in check. For decades now the German social market economy has succeeded in producing prosperity with justice. We should be able to do the same in the United States.

For some years it has been fashionable to depoliticize the Gospel, to make Christ’s saving work solely a spiritual liberation from personal sin. In the history of Israel, however, religion and social justice were intermingled. The sin condemned by the prophets was social sin, and God’s fidelity to Israel was conditioned on people and king upholding justice in the land. The infancy narratives echo those same themes. Luke’s Magnificat holds a message of political renewal:

He has put down the mighty from their thrones,

and exalted those of low degree.

He has filled the hungry with good things;

the rich he has sent empty away.

Details of Matthew’s Gospel, like Herod’s fear of John the Baptist and the massacre of the innocents, set Jesus’ birth and public ministry amid a political struggle. Taking up the challenge of social responsibility, therefore, is integral to full faith in the Incarnation. For, as the psalm of the Christmas Mass at Dawn declares:

Light dawns for the just;

and gladness for the upright of heart.

Be glad in the Lord, you just,

and give thanks to his holy name.

The Editors
Show Comments (
6
)
Comments are automatically closed two weeks after an article's initial publication. See our comments policy for more.
Peter Schwimer
10 years 8 months ago
Unfortunately, bad things happen when good people remain quiet.  Because they don't want to offend or rock the boat, because they are afraid, afraid that "it" may happen to them.  And "it" does, inevitably, exactly because they remained quiet.

Charity begins when we are willing to love one another, deeply, spiritually love one another... and put our treasure where our mouth is.
Mike Evans
10 years 8 months ago
And will our bishops speak out loudly in every media to advocate for the social safety net for the poor? Will pastors and preachers make care for the poor an essential part of their Christmas message? Will anyone, even the Occupiers, speak on their behalf? And if they do will it all be forgotten by the Super Bowl?
Des Farrell
10 years 8 months ago
I'm starting to believe that my recent 15 euro subscription to this journal may have been the only intelligent thing i've done with my finances in the last few years!
james belna
10 years 7 months ago
This editorial asks a very provocative question: “How can we participate in Christ’s liberation of the oppressed?” As I assume that the editors have made this inquiry in all sincerity, I would like to offer a modest suggestion. America Magazine is headquartered in an office building in Manhattan, amidst a veritable sea of commodity producers and hedge fund managers. Although I don’t agree with your class war rhetoric, it is difficult to imagine an environment that would be (from the editors’ point of view) more hostile to the poor and working people, or one less conducive to living out a vow of poverty. I doubt that I am the only reader who has noticed that you are fighting for the poor from behind enemy lines. If you really want to do something concrete to mitigate inequality, why don’t you sell your upscale midtown digs, give the money to the poor, and relocate to an industrial park in New Jersey? This would send a powerful message, and lend instant credibility to your editorial stance. On the other hand, if you find the eye of this particular needle too difficult to pass through, perhaps you will excuse some of us for wondering why you are calling on other people to make sacrifices that you won’t make yourself.
Elaine Tannesen
10 years 7 months ago
Editorials like this one  keep me coming back to America Magazine and to the Catholic Church.  Your compassion, logic, facts, and eloquence say it all.  Our social contracts, our budgets are moral documents.  Duped by media lies, our country has become one of the least "Christian" in the industrialized world.  Thank you for the reminder of the gospel's repeated call of the poor. How can we ignore this call and follow Jesus?
Katherine McEwen
10 years 7 months ago

I've known the Magnificat for a long time. However, these words leapt out at me after reading this article. They are so revolutionary AND so necessary right now. We need this social reversal in both the US and other countries where the gap between rich and poor is growing.

He has put down the mighty from their thrones,

and exalted those of low degree.

He has filled the hungry with good things;

the rich he has sent empty away.