'Sustained by Faith': An interview with Robert P. George 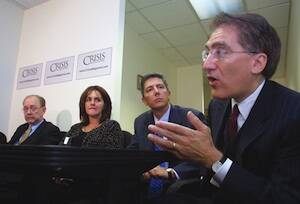 As the holder of the McCormick Chair in Jurisprudence at Princeton University and the founding director of the James Madison Program in American Ideals and Institutions, is well known for his intellectual rigor and dedication to politics. One of the nation’s leading conservative thinkers, Mr. George has unofficially advised a number of U.S. Catholic bishops on matters of politics and morals; he has also led organizations that oppose same-sex marriage as well as the sexual trafficking of women and children. President Bill Clinton appointed him to the U.S. Commission on Civil Rights and President George W. Bush appointed him to the President’s Council on Bioethics. In July, America spoke with Mr. George in Princeton, N.J., about more personal matters: his prayer life, his advice for young adult Catholics and the relationship between his Catholic faith and his academic scholarship. Read the full interview here.

On my knees, the old fashioned way. Not always, but I do find that being on one’s knees in a posture of prayer facilitates trying to remove oneself from one’s normal routines and puts oneself in the presence of God for that conversation.

I like to pray with people, especially with friends—some of whom are Catholic, some of whom are not. I like the old fashioned forms of prayer such as the rosary or the Our Father, the Hail Mary, the Glory Be because of their simplicity. We learned them as children, most of us, and they continue with us in our adult life. We should never regard ourselves as too sophisticated for these prayers.

How do you address spiritual desolation?

I find that reading and praying the Psalms is helpful. Especially in the darker moments—those moments of peril or, as you say, desolation—the psalms remind us that God is in charge and that we are ultimately reliant on him.

I think of Jesus’ prayer on the cross: “My God, my God, why have you forsaken me?” [Mk 15:34]. Jesus is stating the first few words of a psalm [Psalm 22] that will end not with an expression of despair but with a profound expression of hope and trust in God. We are not in control. My great and dear and much missed friend, Father Richard John Neuhaus, used to say: “We have to remember that we are not in charge of making things turn out all right. That’s God’s job. We are in charge of being faithful. We are just supposed to be faithful. The rest is God’s part.”

Who did you look to as you matured spiritually and intellectually?

My parents were very important spiritual influences in my life, in quite different ways. My father has very deep but childlike faith. When you hear him praying, you would think that he is talking with a friend. He comes from the Eastern tradition, Syrian Orthodox, and there is a very strong mystical component in the Eastern tradition, very deeply Trinitarian, and a strong devotion to Mary as well. My mother is from an Italian background and is Roman Catholic. She taught us the formal prayers. The rhythm of our lives was the rhythm of the church’s year: Sunday Mass, Stations of the Cross in Lent, the special occasions of adoration of the Eucharist.

In graduate school, I was supervised by John Finnis at Oxford, who is a contemporary Catholic moral and political philosopher. Finnis, like so many of my Catholic friends, especially my intellectual Catholic friends, is a convert. Many of the Catholic philosophical writers whom I admire are also converts: the late Elizabeth Anscombe, Michael Dummett, Peter Geach, Alasdair MacIntyre, Nicholas Rescher. They influenced not just the spiritual dimensions of my faith but also the intellectual dimensions.

My faith has also been enriched by the influence of religious people and writers from other traditions, including Rabbi David Novak, Gilbert Meilaender, who is a Lutheran, and Leon Kass, who is Jewish.

How does your faith influence or sustain your academic scholarship and teaching?

The Second Vatican Council teaches that all of us, not only those called to priesthood and religious life, have vocations. The council stresses the importance of discerning our vocations and integrating all the different aspects of our lives in light of our discernment of what God is calling us to do. I view my teaching, my scholarship and my activism in the world of public affairs as part of my vocation. Faith plays an important integrating role in my life.

My life is sustained by faith. I need God’s help to discern what I should be doing and how to do it well. I need God in my life to apologize to when I fail. I need God as comforter and also God as challenger. I think that God challenges us to do more and to do better. It is in the light of God that we can see just how little we have accomplished, no matter how generously the world has showered its honors on us.

How does a person know that a particular vocation is what God intends for him or her?

I think the only way anyone can know one’s vocation is by discerning it in prayer. One has to be in relationship with God. That means, for a Christian, being in relationship with Christ and looking for that guiding hand and feeling the force of that hand when you are going off the path. God is always trying to bring you back on to the straight and narrow way, and because his hand is gentle, it is all too easy to pretend that we do not feel it.

Of course the real danger with any human life is rationalization. If you rely just on feeling, then most of the time you are going to think: Well, if I want to do something, that must mean that God wants me to do it or is giving me permission to do it. We confuse God’s will with our desires, when in fact God may be willing that we resist those desires.

What aspect of Christianity or Christian belief most resists a rational account?

I think the Christian faith, particularly the Catholic faith, is a very reasonable faith. Catholics think that faith and reason are both important and mutually supportive of each other. In his encyclical “Fides et Ratio,” Pope John Paul II begins with this wonderful image: he says that faith and reason are like the two wings on which the human spirit ascends to contemplation of the truth, and it does take both wings.

I think that the strongest, most mysterious and, in some ways, the most impressive aspect of Christian faith is that it challenges natural human emotions. Perhaps the most radical of all of Christ’s teachings is love of enemies. I would not say that love of enemies is contrary to reason. But I would say it is contrary to the natural emotions that we have, and so it challenges us in a fundamental aspect of our being, because we are not just pure minds. We do have emotions and we do have feelings, and loving our enemies is not only difficult, it just goes against the way we are made. To me, the fact that Christianity could make so bold and radical a demand is more evidence for the supernatural truth of Christianity.

I see the Christian faith as a faith that integrally involves a hope that is not a matter of blind faith. Of course, since the whole story of salvation, the whole story of redemption, is so marvelous and transcendent, it is plainly outside the realm of our ordinary experience, and thus it is a challenge to reason, because reason ordinarily deals with what is normal—what happens most of the time. Here you have something extraordinary in every way; so yes, there is a certain kind of challenge to reason, but not one that should lead us to think that we should praise the irrational or that our faith as Christians is an irrational faith.

How does the reality of suffering affect your prayer, your living out of faith?

It is a cliché but, nonetheless, I think it is true—that from the Christian point of view, suffering can only be accounted for as a great mystery. Christianity has a story about suffering. It is a very powerful and beautiful story, but it is a difficult one: suffering offers us the opportunity to participate in a small way in the redemptive work of Christ. Martin Luther King Jr. emphasized that unearned suffering is participation in the act of redemption. Now, why would redemption require suffering? Or how is sacrifice necessary for redemption? These are deep issues to which, ultimately, I think there is no completely satisfying answer. With a mystery like this one can only enter more deeply into it rather than solve it. It is not meant to be solved.

Suffering is a challenge to us in two ways. First, no life is free of it. It is the nature of suffering that you cannot protect yourself against it or ward it off by being rich or important or by having status, celebrity or prestige.

Second, suffering calls forth from us a natural human empathy; but beyond that, in our Christian vocation it demands of us a response. It requires us to be there for the other person to try to ameliorate suffering. It is most significant and most challenging when it is suffering that cannot be made to go away, but which can be lightened by sharing. Where one’s Christian vocation requires one to meet the needs of others who are suffering, by sharing their suffering, by taking part of it on oneself—that is the imitation of Christ.

What advice do you have for young adult Catholics maturing spiritually and intellectually?

My first bit of advice would be to attend to your spiritual life. Develop a strong interior life, especially when we are making educational choices and anticipating career choices. We have to discipline ourselves to maintain regular prayer, engage a spiritual director and examine the options for different kinds of spirituality—Ignatian spirituality or the spirituality associated with some of the new movements in the church like Opus Dei and so forth. Find something that one is comfortable with, and make it a point to work on strengthening one’s spiritual muscles all the time. A lot of young people today will really be determined about jogging or going to the gym and staying physically healthy; we need to have the same attitude toward our spiritual lives.

Perhaps the most important thing for young people to be thinking about is, what is God’s plan for their lives; what is God calling them to do? Discerning that vocation is in a certain sense one’s primary job; and if you do not have a strong interior life, you lack the foundation for that discernment. Strengthen your spiritual life so that you can properly discern God’s will for you in all the dimensions of your life. Gain God’s assistance in living a life that makes sense—integrated and devoted to things that matter.