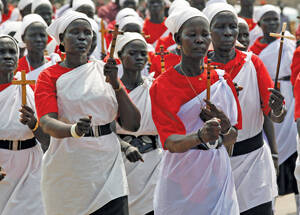 In an event marked by joyful celebration and hope, the Republic of South Sudan was born on July 9, 2011, becoming the world’s newest country. The joy was over the South Sudanese people’s freedom, at long last, after decades of exploitation by the northern government in Khartoum and a war that took the lives of millions and displaced millions more. The people of South Sudan hope their new democratic government will lead them to a peaceful future based on justice for all.

Participants in the celebration were aware, however, that the fulfillment of their hope is by no means guaranteed. Conflict between Khartoum and northern groups that were allies of the south during the civil strife could reignite war between the new country and its former rulers. South Sudan also faces daunting internal challenges. It is one of the world’s poorest countries. And it has just begun the task of creating the political and economic institutions that sustain national life. Creating the hoped-for future will require much of both the government and the people. The U.S. government and the U.S. church, which provided important assistance to South Sudan in its pre-independence struggles, will have to continue their support. The tasks ahead will be arduous for the South Sudanese and for all concerned with their future.

With new nationhood come new responsibilities. In the midst of the long north-south war, one of Sudan’s leading intellectuals, Francis Mading Deng, co-authored a book entitled Sovereignty as Responsibility. Mr. Deng wrote about the plight of the millions of southern Sudanese killed and displaced by what was then their own government in Khartoum. He argued that sovereignty requires a government to protect the rights of its people and to secure justice for them. If a government fails in this responsibility, it loses the immunity from international intervention that sovereignty ordinarily provides.

During its long struggle with the regime in Khartoum, southern Sudan appealed to this understanding of governmental responsibility to call for international help. The government of South Sudan, now a sovereign nation-state, has a responsibility to secure justice and protect citizens’ rights; because it is a democratic republic, its people share this responsibility. Failure could lead to a repetition of the injustices that led South Sudan to choose independence. Keeping the joy and hope of the July 9 independence celebration alive will demand effective action by citizens and their political leaders.

The Catholic community in South Sudan shares the responsibility to help shape the life of the new country. Catholics make up a sizable part of the population. And because the civil war weakened social life, the church is one of the few functioning bodies in civil society today. Catholic Relief Services and an association of women’s and men’s religious orders named Solidarity With South Sudan invited me to conduct a weeklong workshop last August for church leaders. I was asked to address how the Catholic understanding of social justice and peace could contribute to the development of the new country. My strategy was to move from the foundational principle of Catholic social thought to several practical recommendations. This approach, sketched here, could be applied to other new democracies as well as to South Sudan.

This foundational principle follows from the fact that all people are created in God’s image. Dignity requires that all citizens contribute to the life they share in common and that all benefit from it. As Pope John XXIII put it in his encyclical “Mater et Magistra” (1961), “Human beings are the foundation, the cause and the end of every social institution” (No. 219). The new institutions of civic and governmental life being created in South Sudan ought to protect citizens’ rights and enable citizens actively to shape their life together.

1. The people of South Sudan should be helped to become active citizens through civic education that enables them to work together for the common good. South Sudan, like many other developing countries, faces the danger that the immaturity of its political institutions and culture will make a stable democracy difficult to sustain. A single referendum and occasional elections are not enough. The church can help South Sudanese citizens learn their new role as citizens. That the church can provide effective civic education is clear from the role it played in preparing people for the referendum on independent statehood.

2. Citizens should hold government officials accountable for using the power bestowed on them to serve the common good. To accomplish this, the capacity of citizens to hold officials accountable should be strengthened. A democratic society that is just and peaceful over the long term requires that politicians and public institutions be accountable to those they serve. The church can help citizens to understand that they have a right to this accountability. The church can also provide educational and pastoral support to public officials, helping them develop the civic and professional virtue they will need to resist the temptation to use their power for their own benefit. Political and economic power should serve the common good, not enrich those who possess it. A very young nation, especially one as poor as South Sudan, must resist corruption from the outset if the country is to have a healthy political future. The Catholic tradition has resources that can help, especially its emphasis on the role of political and legal action in building the common good.

St. Thomas Aquinas, following Aristotle, once commented that the use of governmental power for the private good of the ruler is “tyranny” (Summa Theologiae, I-II, q. 42, art. 2). Since South Sudan was created through an extended struggle against tyranny, it needs to develop a public culture that resists corruption. The church can help by providing a strong example of accountable leadership in its own governance. The stakes are high, as the effects of the misuse of power in other developing countries have made clear.

3. Every person is to be treated with reverence and respect, independent of ethnicity, race or religion; tribalism is a serious threat to attaining the justice and peace that independence promises, and it must be resisted. Creating new political and legal institutions and a permanent constitution is a formidable task. These institutions need to respect the rich ethnic, cultural and religious diversity of the new country. If minority groups feel excluded from this process, both peace and justice could be threatened. Even more difficult will be the creation of a shared national identity that leads all to see themselves as South Sudanese first and members of their tribes second. The distinctive cultural identities of ethnic communities must enjoy equal respect and treatment. South Sudan was born because of devastating divisions between north and south based on ethnicity and race (Arabs versus Africans) or religion (Muslims versus Christians and followers of traditional African religion).

4. The church should help the country overcome tribalism through preaching and other educational efforts. The church can also serve as an example in the way it structures its own communities and carries out its ministries. To prepare for independence, the church conducted a nationwide pastoral project called One Nation from Every Tribe, Tongue, and People (the title is adapted from Rev 5:9). Attaining national unity is a long-term project, as shown by recent clashes in Jonglei State that took hundreds of lives. Sustained work in building a national culture that respects dignity across tribal differences will be one of the church’s most important contributions.

5. National unity depends on the just distribution of land. South Sudan is blessed with an abundance of agriculturally productive land. In contrast to the regions to its north and east, it also has the water needed for agriculture and the grazing of animals. How these resources are used will have a major impact on the country’s capacity to address its extreme poverty. Catholic tradition, from the patristic era to today, has long insisted that land is a good created by God for the benefit of all, not just for the rich or for a privileged elite. It is regrettable that land-grabbing by powerful people and the sale of land rights to foreign nations like China may set back efforts to alleviate poverty. The new government is currently developing a land bill that will significantly shape the economic future of the country. Here the church can be an advocate on behalf of the many South Sudanese who could become more economically self-sufficient if they had land. The global church can call for international accountability regarding the sale of land rights to foreign countries or corporations.

6. National unity also depends on the just distribution of profits from the extraction of oil and other natural resources. South Sudan has rich oil reserves. In the past nearly all the economic benefits from these reserves went north. The extraordinary difference between the wealthy northern capital, Khartoum, and the new southern capital of Juba bears witness to the injustice in the way oil was handled before independence. The new country will be challenged to develop a just policy on oil extraction and on the use of oil profits. Few if any African countries with oil or other valuable mineral resources have been able to accomplish this goal. Instead, natural resources are often used to further enrich the elites, which deepens inequalities and stimulates resentments among those who do not benefit, which in turn leads to conflict. In poor African countries, one often hears talk of a “resource curse.” South Sudan needs an oil-use policy that will prevent the blessing of their land from turning into a curse.

The country will need assistance from other governments and from international nongovernmental organizations that have worked elsewhere to assure that the poor benefit from natural resources. It will also need help in pressing U.S. and European oil companies and importing nations like China to refrain from blocking South Sudan’s way forward. The Catholic tradition sees oil and other natural resources as blessings from God, but always with the expectation that they be used to benefit all.

The people of South Sudan have enormous hope for the justice and peace their independence promises. The local church worked effectively for the surprisingly peaceful transition to independence. Today the challenges for the people and the church in South Sudan are perhaps even greater than in the past. Both U.S. policy-makers and the U.S. church need to remain strongly engaged in South Sudan’s early efforts at nation-building and in preventing conflicts in the north from impeding these efforts.

I hope the practical suggestions made here will help the South Sudanese, as well as U.S. citizens and the U.S. church, continue the work that is indispensable for enduring justice and peace. 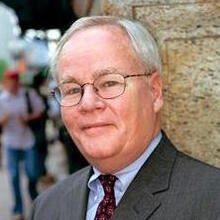 David Hollenbach, S.J., holds the University Chair in Human Rights and International Justice at Boston College, where he teaches Christian social ethics in the theology department.