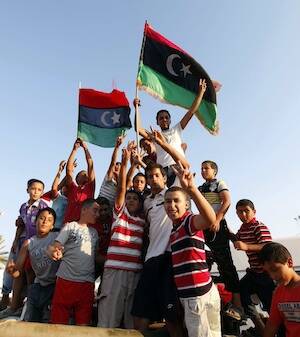 The unexpectedly rapid fall of Tripoli revealed one unambiguous winner: the Libyan people. Armed sometimes only with hope and frustration, they set in motion a sometimes haphazard resistance that brought an end to Col. Muammar el-Qaddafi’s 42-year regime. Media speculation about whether President Obama’s Libyan policy counts now as a political victory for him is beside the point. The relatively quick collapse of the loyalist forces in the capital city, accelerated by the active participation of its residents, made clear, were there any doubts, that this uprising was a mass revolt of the Libyan people. Their heroism in vindicating their own rights should not be demeaned.

Another “victor” in the conflict has been the case for multilateralism. President Obama’s decision to approve a limited role for U.S. forces in the international effort to oust the colonel was much derided by critics from the left and the right as simultaneously too much and too little. Confidence in multilateralism may be restored by the outcome in Libya. The patience and effort to put together a real coalition not only saved U.S. face and finances; it also spread the risk and the burden of the use of force in a manner that was deemed acceptable to all parties.

And the success of the Libyan uprising is more than another flower in the Arab Spring. It is a palm of achievement for the novel international doctrine of the responsibility to protect. Endorsed by major powers, including the United States, at the 2005 U.N. World Summit, R2P still lacks full support from politicians and policymakers in some countries. It proposes that the world community has an obligation to intervene when a state fails to respond appropriately to a humanitarian catastrophe or, worse, is itself an agent of genocide or crimes against humanity within its own borders. The doctrine has emerged in recent years out of abject failures to intervene in Rwanda, the Sudan and the Democratic Republic of the Congo.

Colonel Qaddafi’s threat to reduce Benghazi to the Stone Age was the R2P-based justification for the NATO air campaign. (It was pretty clear from the beginning, however, that NATO was inclined to put an end to Qaddafi’s rule.) Until now the enforcement provisions of R2P had not been applied. Emphasis has been instead, appropriately, on prevention and on reconstruction after conflict. Now the utility of a limited use of force as part of R2P has been vindicated in the skies over Tripoli, and the ability of NATO to play a useful international role, even without U.S. leadership, has been demonstrated.

Still, the success in Libya of the doctrine of the responsibility to protect presents two dangers. The air campaign was costly and hazardous both to service members put in harm’s way and to the reputations of politicians and republics alike that participated. The air campaign also took significantly longer than anticipated. Qaddafi proved more durable than expected; but so, too, did NATO’s ad hoc Libyan coalition. The length of the air campaign contributed both to its expense and to the risk that it would turn ugly and thus diplomatically damaging. Those concerns may still cause hesitation in the face of the obligations of R2P when the next humanitarian crisis arises.

A related danger is that success may prove intoxicating to some, who may rush into the next intervention without properly assessing the risks and possible outcomes. Some may come to see R2P as an international obligation to be met merely or most effectively through a military response. But the doctrine remains best served by proactive, non-lethal diplomatic persuasion, economic pressure and peacebuilding initiatives.

The outcome in Libya remains far from certain. It is no longer in danger of becoming another Syria, where government forces repress dissent. But will it become like Iraq, riven with sectarian and tribal violence, or like Turkey, where a moderate Muslim government exercises power in a democratic state? The character of the new Libyan state will depend only in part on the political will and practical commitments of the world community to the Libyan people. By opening up frozen Libyan assets, the United Nations has made it possible for Libyans to avoid a humanitarian disaster in the wake of the conflict. Libya will have the means to procure what the nation needs. Returning expatriates and a restored civil service, however, can bring the nation only so far. A new constitution must be drafted and the rule of law established. In addition, measures need to be taken to re-establish trade with its neighbors and to diversify an economy too reliant on oil exports. Winning the armed struggle was the easy part; securing the peace and building a nation will be harder. In this new effort, it will befit the United States to maintain the reduced profile that President Obama set during the armed struggle.

The Editors
Show Comments (
1
)
Comments are automatically closed two weeks after an article's initial publication. See our comments policy for more.
C Walter Mattingly
10 years 10 months ago
President Obama's military record is one area (perhaps the only area) of reasonable success for his administration. Surprisingly this success displays a remarkable continuity with the defense strategies of the Bush administration. Not only did he utilize the proven excellence of President Bush's Defense Secretary and brilliant general, Secretary Gates and General Petraeus, but excepting the interrogation procedure of waterboarding dangerous kingpin terrorist murderers for information (evidently we still continue to so waterboard our own troops as we have for two generations), he has followed up on keeping Guantanamo open, rendition, utilized the Bush administration's surge tactics, quarupled the deadly drone assassination missions, and so forth. Even the Libyan campaign itself grew out of the Arab spring, which the planners of the Iraqi invasion predicted would result far sooner if the occupied Arab nations saw an Iraqi people with a democratic vote and their own government (which has occurred although there is no certainty to a causative relatinonship), has been a continuation of this coherence of action between the two presidents. Both right and left hate to admit it, but the evidence is before us. Yet one troubling area which America addressed earlier is that, unlike President Bush, President Obama unlawfully bypassed both Senate and Congress in initiating and continuing his warring hostilities against Gaddafi, even continuing past the 60 day limit without such approval. In this, as well as his headshot on an nonresistive, unarmed Osama and dumping the body in the ocean, President Obama, incredibly, has earned a reputation as gunslinging cowboy , surpassing that of President Bush. Also incredibly, Obama's reputation in most Middle Eastern countries is now lower than Bush's was at the end of his presidency. The prospect of setting precedent for a president to wage war without Senate and Congressional approval, however, is a troubling contribution of the Obama regime.