A Matter of Faith: A physicist reflects on his work at ground zero 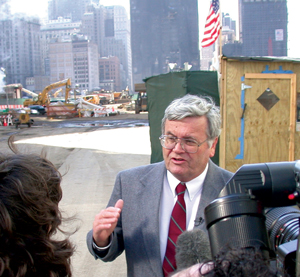 Had I not followed the unconventional career path to which my Catholic faith led me, I never would have been standing next to the stinking wreckage of the World Trade Center in winter 2002. I had gone to New York City to testify before a Congressional committee that the air surrounding the site was not “safe to breathe,” as the administrator of the Environmental Protection Agency had stated, but instead contained materials that would inevitably and seriously degrade the health of workers at the site, most of whom lacked respirators.

Decades before the terrorist attacks of Sept. 11, 2001, I had gradually abandoned the fascinating field of nuclear astrophysics to apply my physical techniques to air pollution, partially driven by the injustice of environmental assaults on people unable to protect themselves. Catholic moral and ethical teachings were far removed from my research and teaching then—a separation of faith and life I had learned at an early age.

Growing up in the 1940s in rural New England, I lived in a town with six Catholics (our family and one old couple). There was still a strain of Puritan anti-Catholicism there, so we kept religion to ourselves. Later, when I began doctoral studies in physics at the University of California, Los Angeles, immersed in a university and a discipline that rejected God, I almost felt at home. My Catholicism, practiced on (most) Sundays, held little relevance for my work.

This was, however, a time of massive development of lethal hardware, nuclear and otherwise, the military-industrial complex driven by fear of Soviet capabilities and intentions. Moral issues abounded for physicists, but these went unaddressed by the physics department, the university and academia at large. The topics were being addressed, however, by Elwood Kieser, C.S.P., and a small group of helpers in a television series produced by Paulist Productions in Los Angeles. I volunteered to help them get the science right in a few screenplays and scrounged up hardware from U.C.L.A.’s surplus bins to make their sets look more scientifically credible. Yet that involvement, minor as it was, put my Catholic faith in a new and relevant light. A further benefit from my revived faith came during a rare visit to the local Newman Center: I met my future wife.

As a professor at the University of California, Davis, in 1967, I saw a faith problem emerge, not with my peers but with my students. Some came from strict evangelical backgrounds and held values that conflicted with what I was teaching. This led to many conversations, during which I tried to show that there was no conflict between my being a Christian and a physicist and that truth is unitary, be it in science or religion. The acceptance of modern science by the Second Vatican Council and the church’s embrace of evolution further weakened the artificial barrier between my faith and my physics.

My students and I began applying physical methods to test air quality along roadways and in residential areas, helping form legislation in California to eliminate lead emissions from cars that is now copied around the world. While continuing our work in environmental justice, we expanded the scope of our work into the natural ecosystem. A veteran of scores of environmental battles, I also proposed, designed and for 20 years ran air quality programs to protect visibility at national parks and monuments, including a bitterly contested victory protecting the Grand Canyon from a coal-fired power plant.

A decade later, when a colleague in New York asked me to send our unique air samplers to his laboratory after 9/11, I was willing and, luckily, able to help. Our World Trade Center study angered both the New York City mayor’s office and the Bush administration, because our air samplers proved that workers on and near the site were affected by air that was unsafe to breathe in the months following 9/11, in spite of assertions to the contrary. My federal contacts were suddenly cut, and I still receive nasty calls and letters for this study. Yet I contributed to a recent victory—a $750 million settlement to cover those workers’ health care costs.

Physics itself has come full circle. Stunned by the discovery of the Big Bang and a one-way universe, physics has outgrown its “sophomore-engineering atheism” phase. Many of the 20th- century’s greatest physicists came to accept the need for a creative power, since the origin of the Big Bang cannot be explained by the laws of our universe (see Einstein’s God, by Krista Tippett and Andrew Solomon). One successful contemporary English astrophysicist, John Polkinghorne, became an Anglican priest. And since 1985 physicists have come to realize that the laws of physics strongly support the hypothesis that life itself is the reason for the universe, that it is not just an accidental, organic smear on this rocky planet. The implications of this hypothesis are still being argued and developed, for both physics and theology.

As my work in physics evolved into global-climate protection, I have experienced another benefit of Catholicism. Traveling to distant spots, some very primitive, I have nevertheless been able to find a Mass being celebrated. The experience of these treasured Masses has profoundly changed me, humbled me and made me grateful for the sacrifices and faith of those who made them possible. I have reached a concordance: I believe, and my belief helps direct how I use physics, while physics itself lays a rational foundation for my belief.

Thomas A. Cahill is an emeritus professor of physics and atmospheric sciences and former director of both the Institute of Ecology and the Crocker Nuclear Laboratory at the Univ. of California, Davis. He is currently head of the U.