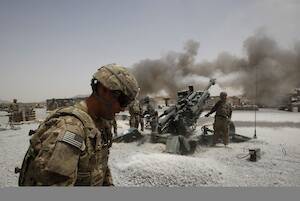 Congressman Walter Jones Jr., of North Carolina, has undergone a thorough conversion. A Democrat, he became a conservative Republican; a Baptist, he became a Catholic. He supported the Iraq and Afghanistan wars; now he sends hand-written letters of condolence to the American families who have lost a son or daughter. He told George C. Wilson in The Nation (6/13) that he deals with the guilt over having voted for both wars because he was “not strong enough to vote my conscience as a man of faith.” Mr. Jones and his 13-member Out-of-Afghanistan caucus plan to push the war to the forefront in the presidential primaries. Public support for the war has fallen. Only 43 percent of Americans feel it is worth fighting, according to a Washington Post/ABC News poll (6/7). A Pew survey on June 21 found that 56 percent wanted troops out as soon as possible and only 39 percent supported staying until the situation stabilized.

In June, 40 religious leaders from all faiths wrote to President Obama that it is time to bring the war in Afghanistan to an end. What began as a response to the terrorist attacks of Sept. 11, 2001, they contended, has become an open-ended war against a Taliban insurgency.

Since then President Hamid Karzai has replaced his assassinated half-brother, the Kandahar tribal leader, with another brother. U.S. investigators have uncovered a trucking scandal in which at least $3.3 million paid to eight Afghan contractors has gone through middlemen to Taliban insurgents as bribes in the form of weapons, explosives and cash. Night raids, now 300 a month, have killed both Taliban men and their wives in the same bed.

President Obama’s address in June tried to placate both political critics weary of the 10-year war and military leaders who wanted more time to form a well-trained Afghan army, despite its overwhelming illiteracy and high turnover, and a stable government, in spite of its corruption.

The president promised 30,000 “surge” troops would leave Afghanistan by 2012, then 70,000 for a “complete” pullout in 2014. An unspecified force would remain, however, for “support.” Translated, this looks like an indefinite occupation. The administration should reconsider its priorities. The first engagement in Afghanistan was to arm the mujaheddin to drive out the Soviets in the 1980s. After 9/11, although we replaced a pro-Al Qaeda Taliban government with Mr. Karzai and have driven out Al Qaeda again, the United States has not “won” in Afghanistan because the goals of “nation-building” were too broad and U.S. troops are laboring in inhospitable terrain and a closed culture.

Meanwhile, the damage at home has been significant. According to a Brown University study, the war will cost $4 trillion. Much of that money could have been used to create jobs, rebuild this country’s roads, bridges, schools, health care system and parks. The greater cost has been in human life, both American and Afghan. There have been 1,574 U.S. casualties in Afghanistan. Add to that number the 6,670 severely wounded by improvised explosive devices, including amputees. These numbers do not account for the emotionally wounded, suicides, fractured families, victims of alcohol and drug abuse, accidents and sleepless nights. The question of civilian deaths—estimated at 11,700 to 13,900—is not resolved by saying that the insurgents have killed more people than NATO troops have killed. The Afghan people blame NATO more because it represents the intrusion of a foreign power.

Negotiations with the Taliban have not borne fruit. In the long run, only the Afghan people can determine their own fate. The 40 U.S. religious leaders urge that the military be replaced by civilian organizations with relief and development aid experience. Al Qaeda no longer lurks in a compound in Pakistan but is spread throughout the Middle East in cells. Whatever the future, the “global war on terror” is no longer the appropriate term for dealing with the complex challenges introduced by the Arab Spring. If the Central Intelligence Agency, now led by Gen. David H. Petraeus, imagines it can base a foreign policy in this volatile part of the world on the failed strategies of the last 10 years, it is misguided.

As the United States withdraws, it must accept responsibility for the moral dimensions of the decision, which extend beyond the hardships endured by Americans. They include the specter of civil war among Afghan tribes and the possibility that the Taliban will return to power. The respect for human rights we advocated and the additional roads and schools we wanted to build will not come about—a cautionary tale for future nation-building. After 10 years, the costs of this war are too high. The United States has done what it could. It is time for a rapid withdrawal that will have all troops home by Christmas 2012.

The Editors
Show Comments (
3
)
Comments are automatically closed two weeks after an article's initial publication. See our comments policy for more.
Jerome Riggs
10 years 11 months ago
I could not agree more with this editorial. I was a Vietnam veteran, had just graduated from 8 years of Jesuit high school and college, and spent 3 years on active duty. While in Vietnam I had a clear conscience about our involvement in the Vietnam war, but now with hindsight, I wish we had never done it.

The good that may have happened is that the US inherited a wonderful population of Vietnamese refugees.

We need to bring our men and women home, the sooner the better.
Craig McKee
10 years 11 months ago
http://www.globalresearch.ca/index.php?context=va&aid=19769
Before a rational and total withdrawal can be designed and achieved, our leaders have to COME CLEAN with the TRUTH about why we are really there. It is not about freedom and democracy for th Afghan people. We are there for the very same reason that RUSSIA was there in the 1980's and we created the monster of Saddam Hussein to do our dirty work against them: MONEY. More precisely, precious minerals, trillions of dollars worth hidden in those godforsaken mountains.

10 years 11 months ago
Some of us look at the worlds' news from a Catholic perspective before we put on our arm chair economist or ideologue cap (not that there's anything wrong with either per se)...

And what I see is a huge nation full of people who have never been introduced to the Gospel in a world where neither the nation nor the global Catholic religious community has felt it appropriate to actually consider sending missionaries.

After all, the "problem" with Afghanistan in the first place is their being in the thrall of a theological world view - so all the kinetic and economic force in the world won't address their fundamental motivation which is theological. ONLY by facing the theology and offering a counter argument/counter theology will we ever have a "prayer" of success in solving "the problem".

Ditto with respect to communism in Vietnam: until the ideology itself with all its messianic and utopian promises of heaven on earth is confronted and proven false and harmful, all the waring and sponsoring of the Republic of Vietnam was at best a holding pattern, a rearguard action.

You cannot solve poverty in America's inner cities if you think the problem is "merely" the lack of cash in peoples' pockets! It's much more humane than that - if that was the problem (economic poverty) then 50 years of federal, state, and local direct aid, charity, and free giveaways, plus free housing, free food, free clothing, free health care, free education..... would have solved the problem.

But the lack of cash is not the problem. It's the lack of spirituality and a culture of responsibility which ONLY THE GOSPEL can provide. Instead of preaching first the Kingdom, we have spent 40 years preaching a horizontal, chip on the shoulder, "social justice" ethos which teaches the poor that they are victims, have no moral agency, that the rich are the bad guys, the government is a neutral third party (and savior from the racist suburbanites a hair trigger from KKK lynching...) and that "success" is found in bread and circuses not marriage and responsible citizenship.

Believe all the conspiracy theories you want about "why" we're "really" in Afghanistan or Detroit and you still have a problem needing resolution. If we leave them alone things won't magically become peaceful and women and children won't magically be left alone from thugs. Plus, the theocrats and ideologues at the heart of the problem of violent men and violent movements will STILL BE THERE.... agitating for destructive offensive actions against neighbors and oppressive actions over the victim populations who could have been evangelized and liberated this past decades....except that we in the West felt it beneath us to even try.