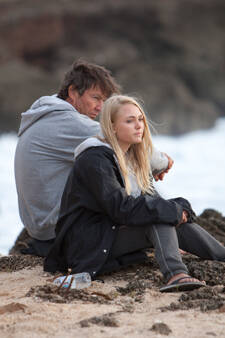 During the climax of “Soul Surfer,” the story of shark-bitten Hawaii teenager Bethany Hamilton, we’re told judges score surf competitions on three criteria—style, flow and power. The movie itself rates middling numbers in the first two categories, yet it scores high marks for its spiritual power.

The key to “Soul Surfer” is the deep Christian faith of the Hamilton family. Since a bright line between the secular and spiritual is never drawn, those inclined to bracket religion when entering the entertainment zone may feel stymied. Yet while the filmmakers hardly avoid Bethany’s religiosity, they’re careful not to douse this sports comeback yarn with Jesus talk. Consequently, only the prickliest atheist could take offense; and born-again athletes will be, well, totally stoked.

“Soul Surfer” is a rarity: a fact-based, family-oriented film that’s being marketed to Christian audiences and which also stands a strong chance of drawing in a wide cross-section of moviegoers. Unlike “The Blind Side,” the picture lacks the backing of a major Hollywood studio and a bankable star such as Sandra Bullock. It can boast the fine young actress AnnaSophia Robb playing Bethany, Dennis Quaid and Helen Hunt as her parents, Tom and Cheri, and, in her big-screen debut, singer Carrie Underwood. Production-wise, it has beautiful island locales and a competent behind-the-camera team.

Most significantly, “Soul Surfer” revolves around an easy-to-underestimate athlete with the spiritual and physical wherewithal to overcome adversity. This perennial theme seems like fodder for a corny made-for-cable flick, but authenticity saves “Soul Surfer” from the hackneyed “uplifting” or “inspirational” labels. In addition to being genuinely affecting, it’s wholesome without being naïve, and nothing about the handling of the shark attack scene will derail beach vacation plans.

For anyone unaware of Hamilton’s story, in 2003 the 13-year-old was straddling her board off the Kauai coast when her left arm was severed just below the shoulder by a Tiger shark. Bethany’s competitive career was just taking off—she and best friend Alana Blanchard (Lorraine Nicholson) had just gotten sponsorship from an apparel company—and her passion for surfing was shared by her family and their circle. As she declares in voice-over, “We spent more time wet than we did dry.”

The Hamilton’s idyllic existence on Kauai entails homeschooling for Bethany and her two brothers and is anchored in the connection they experience between the sand and sea and their faith. We might not associate a laid-back, flip-flop beach culture with organized religion, yet in “Soul Surfer” the Hamilton’s have found a healthy balance between Hosannas and hanging ten. This holds true after Bethany’s horrific accident, which occurs during an excursion led by Alana’s father Holt (Kevin Sorbo). Without being graphic or excessively scary, its depiction generates incalculable tension. Considering she lost sixty percent of her blood, Bethany’s survival was something of a miracle. If not for her calm demeanor and the quick reactions of Holt and his son, she would have died.

The aftermath brings expected difficulties. Bethany and those around her face depression, social awkwardness and occupational hurdles. There’s the media frenzy to deal with and body-image questions inevitably arise. Should she get a prosthetic? What will boys think? These and other topics are broached as Bethany, keen to surf again, returns to the water and the sport she loves. Tom and Cheri differ on how hard Bethany should be pushed once she begins to train for competition. Paddling and ducking under waves are physically trying and she’s prone to getting stuck in the impact zone. The action leads to a thrilling, tear-jerking finale at the National Championships where Bethany and fellow-qualifier Alana battle their mean-girl nemesis.

For anyone Bethany’s age, adapting to the loss of a limb is more about deeds than words or sentiments. This action-oriented attitude certainly fits with the Zen of surfing and the Hamilton’s vital, beachcomber theism. Adapting Bethany’s own book, director Sean McNamara and fellow screenwriters Deborah Schwartz, Douglas Schwartz and Michael Berk communicate this integrated approach to the spiritual and secular by not over- or underplaying faith.
Early on, Bethany and Alana go from riding the waves one minute to singing a hymn with their families at a beachside service the next. Rushing to the hospital after the attack, Cheri beseeches God not to take her daughter. And Tom, who is seen reading the Bible when Bethany wakes up in the hospital, quotes scripture at several crucial junctures when she’s down. Bethany visits Underwood’s youth minister Sara Hill for advice and prayer; and before the accident she attends a youth meeting during which Hill quotes the Book of Jeremiah on the benefits of having perspective.

Shown as the end credits roll, a clip of the real-life Bethany attributing her success to Jesus Christ is the movie’s most explicit religious declaration. Consistent with the idea that action supersedes talk, the decisive plot point is a mission Hill leads to Thailand following the 2004 tsunami. Bethany had skipped a pre-accident mission to Mexico in order to train for her professional surfing debut and on this trip gains immeasurable strength through aiding victims. As Hill proclaims in one of the film’s more pointed if profound lines: “Don’t be sorry for compassion, Bethany, it can move us to do great things.”

“Soul Surfer” contains its share of clichés, especially when Bethany summarizes her experience in voice-over. Any triteness, however, is muted by what we witness, which isn’t to say the movie’s artistic merits are exemplary. The special effects enabling Robb to appear without an appendage are good, and the surfing footage is effective but not spectacular. There’s often a Disney Channel feel to the proceedings and the quasi-mystical island music doesn’t work. The major aesthetic drawback is the artificially frenetic way McNamara advances the action using a series of dizzying montages. Evidently, he doesn’t have enough faith in any one shot to hold it longer than three seconds.

Still, it’s a tale that will tell itself if given air, and McNamara lets Bethany’s religious beliefs infuse the plot as they do her life. One imagines other film versions emphasizing different things, particularly under the aegis of a higher-profile director working with the resources and lowest-common-denominator constraints of a Hollywood studio. There’s the ecological angle, with mankind’s encroachment upon nature. And there’s the “Blue Crush” slant in which a nubile, scantily-clad blonde tries to navigate the shoals of her sexual awakening with an extra complication. The evidence that “Soul Surfer” has no interest in being trendy or salacious may be this: its ending diverges from Bethany’s actual story in a small yet significant way that indicates we’re not being fed the usual celluloid triumphalism.

There’s no shortage of individuals who’ve conquered similar misfortunes and whose stories have been edifyingly told. (For instance, in last year’s Oscar-nominated “127 Hours” the outdoorsman Aaron Ralston does to himself what a fourteen-foot shark did to Bethany.) What distinguishes “Soul Surfer” is that because it is measured, faith functions as a spur to entertainment not a handicap.

According to the press notes, the term “soul surfer” was coined in the 1970s to describe a talented individual who, while they may enjoy competing, surfs for the pleasure of it and whose motives go beyond winning. Bethany Hamilton surfs to praise God and commune with His creation. No more pleasing or fun motives exist.

Dennis Quaid talks about his role in "Soul Surfer."