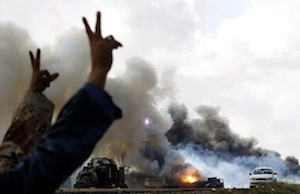 Col. Muammar el-Qaddafi hangs on, even as his foreign minister and others in his inner circle are heading for the exits. If only he would take the hint. The Libyan leader’s “show no mercy” order toward his opposition has led to a virtually universal call for his ouster. Discredited regime change redux? The United Kingdom and the United States are again cooperating, as in Iraq; both urge Mr. Qaddafi to go. Curiously, however, only Britain seems serious about exploring a negotiated end to the military action. While the British foreign secretary, William Hague, has renounced the idea of arming the rebel forces, President Obama has left that option open and is under pressure to oust Colonel Qaddafi by force. He should resist, consistent with his astute transfer of the leadership of the intervention to NATO.

Can the U.N.-authorized military action be deemed a success? Yes, as long as its essential purpose of protecting civilian populations through the no-fly zone and other appropriate means is not transformed into an all-out campaign to defeat Mr. Qaddafi.

Tomahawks and the air sorties have loosened Colonel Qaddafi’s grip, but they are too indirect to dislodge “the leader.” Given his advantages in troop numbers, heavy weapons and long-range artillery, he has the means to retake rebel outposts. Nonetheless, the answer cannot be to arm the rebels, which is one step from training and then assisting them, which would in turn be a step toward “boots on the ground,” the trap of Iraq.

Experience in Iraq teaches that democratic reform is not easily accomplished even with massive, years-long military support. There is less reason to think that in Libya democracy can be advanced by a crowd of near-teenagers firing weapons into the air from old pick-ups with a tendency to go in reverse. Rather than arming rebels who are a checkered and largely unknown lot, it would be wiser to deploy a first-rate diplomatic team—now. Imagine a team composed of Colin Powell from the United States, Javier Solana of the European Union and NATO, Abdoulaye Wade of the African Union and Amr Moussa of the Arab League.

The initial tasks for such a distinguished team would be to secure a verifiable cease-fire and candidly size up the rebels, not in terms of their potential to fight but their ability to govern. If the rebels’ capacity for self-government is great and likely to command respect, Colonel Qaddafi could be offered an ultimatum: If you want to avoid being pursued like an at-large felon, then stop killing civilians and step aside. For purposes of negotiation, scenarios like prosecution in the International Criminal Court may be left vague for now.

Mr. Qaddafi has reason to bargain, and his emissaries have been exploring options in missions to the United Kingdom, Greece, Malta and Turkey. While President Obama ponders, his State Department has been cool to these overtures from Qaddafi advisors, assessing them so far as more publicity than as real moves toward peace.

One of the side benefits of President Obama’s low-profile, multilateral approach in Libya is its supple ability to promote the greater good while allowing for shades of gray. Not every Libyan need be (or is) convinced of Mr. Qaddafi’s evil soul. Given the limits of the U.N. resolution and the economic and political restraints on the intervening coalition, resolution of the conflict will entail compromise. Better a limited compromise undertaken in negotiation than a muddled endgame in which military force fails to achieve an ideal democratic outcome and leaves in its wake civil strife and a prolonged humanitarian emergency. Contemplating any continuing role for Mr. Qaddafi cuts against the usual zero-sum nature of military campaigns. But achieving resolution of conflict need not be thought of as winning or losing a war.

Those who have suffered wrongful detention or worse as a consequence of Colonel Qaddafi’s vengeful ways will likely find any exit by “the leader” in anything other than a hearse insufficient. Yet just as the United States learned from mistakes in Iraq, it should have learned from past retaliation for terrorist acts. President Reagan’s air strikes against Libya in 1986, for example, merely deepened, not lessened world tension. There is little doubt that the rightful exit for Mr. Qaddafi leads directly to the courthouse and his conviction. Yet the role of diplomacy is to achieve resolution of a conflict as early as possible. Better to settle with a word, as St. Augustine wrote, than with the sword.

President Obama has thus far kept his promise to wind down the role of the U.S. military. Going through the door marked diplomacy is the next step and one that should be taken now.

The author, who requests anonymity, is a diplomat who has explored resolving the present dispute with Turkish and Libyan officials.

Show Comments (
1
)
Comments are automatically closed two weeks after an article's initial publication. See our comments policy for more.
10 years 3 months ago
Very wise editorial.  Let's hope the writer's quote of St. Augustine's words: Better to settle with a word than with a sword, is heeded.