Cycles of Life: Finding our daily joy is as easy as riding a bike 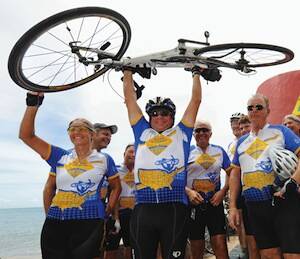 Want to feel like a 10-year-old again? Hop on a bike. The incredible feeling of freedom returns right away. Remember how you felt on your first bike? You could zoom all over the neighborhood. Block boundaries no longer mattered, and you could stay out until the streetlights came on. First thing summer mornings you would jump on your bike and be gone. That bike meant freedom and fun.

It is almost better bicycling as a senior. The feeling of the 10-year-old comes right back. Get on your bike and go wherever you please. Cycle around the neighborhood doing errands. Take to a scenic trail through a park. Head downtown. Train for a longer ride to raise funds for charity or a sightseeing ride in another country. A bicycle is a ticket to a healthy, exciting new lifestyle.

My sister Mary and I have a friend, Bartley O’Hara, who will call us and say, “Let’s go for a bike ride!” He sounds just like a kid when he calls. “This is a mortal sin day,” he says. “On such a beautiful day God says it’s a mortal sin if we don’t go out and ride.” So off we go! Laundry can wait. Yard work can wait. Paperwork can wait. Time to get in the saddle. That’s how my sister and I got started: riding with friends on “mortal sin” days. At the beach we would ride the boardwalk and tool around town.

We grew up in Washington, D.C., a great city for biking. The Capital Crescent rail-trail goes right through Rock Creek Park. It is a beautiful, easy route to the city, along the Potomac River. Picture-postcard views of the monuments become almost routine. On a bike it’s a cinch to tour museums. No traffic or parking hassles. Ride right up to the door of the Smithsonian, park and lock the bike and in we go—an hour for a shot of culture, then back on the bike with a stop for a slice of pizza on the way home. It doesn’t get much better.

After I was tapped for the board of directors of the Rails-to-Trails Conservancy, our riding became more serious. Well, maybe not serious, but more organized. Rails-to-Trails converts abandoned railroad track to trails for walking, biking, stroller and wheelchair use nationwide. The board meetings included not merely the usual cocktail socials, but always a bike ride as well. What a great opportunity to try different rail-trails around the country!

Trail riding is ideal for several reasons. Since railroads do not climb at more than a 6-percent grade, there are no hills. Without the distractions of traffic it is easy to get into the rhythm of riding—de-stress and decompress. And the scenery is beautiful. A biker has the same view the train conductor once had.

When Rails-to-Trails hosted a three-day ride for major donors and board members, Mary and I signed up. The 25 to 35 miles of riding each day was interspersed with rest stops, lovely lunches, fabulous dinners and lodging in charming inns. The conservancy brought along a guide to present the history of the railroad in each area and other points of interest. Rails-to-Trails publishes directories for trails nationwide, with maps and information about accommodations.

One of the most rewarding aspects of biking is riding with extraordinary people. That happened to us when Rails-to-Trails joined with World T.E.A.M. (The Exceptional Athlete Matters) Sports to showcase athletes with disabilities on a ride across America’s rail-trails. Some riders were parapelegic, quadrapelegic, amputees, blind, half-paralyzed—all were extraordinary.

How does that work? When a cyclist has trouble ascending a steep hill, for example, a stronger rider puts a hand firmly on that rider’s lower back to support the push. Kevin, paralyzed on his right side and riding a home-built tricycle, was in trouble on one relentlessly steep hill in Illinois. A strong rider helped, but reinforcements were required. So another, then another and finally four strong men, two on each side, helped him make that hill. At the sight of it, tears flowed unbidden among many riders.

Riders were assigned different roommates each night. One night my roomate, Lee, a young, quiet and sweet woman who had survived a massive brain injury in childhood, said: “I’ve been watching you, and I can’t see your disability. I can see all the others. What’s yours?” Thanks to a burst of grace, I replied, “My disabilities are on the inside, so they don’t show.” Next day Lee proudly and promptly reported that to everyone.

It is a humbling privilege to ride alongside newly made friends like these, whose courage, determination, humor and spirit shine forth like the face of God.

Our long-distance road cycling began with a flood. In 1998 I was in San Diego at a Rails-to-Trails conference when my beloved beach cottage in Delaware was clobbered by the effects of violent storms. Water spilled over the windowsills, furniture floated, books drowned. It was obvious the house would never dry out by summer.

A colleague on the conservancy board, Mark Ackleson, president of the Iowa National Heritage Foundation, offered solace: “Ginny, since your beach house is out of commission, this is the perfect summer to ride the Des Moines Register’s Annual Great Bicycle Ride Across Iowa,” known as Ragbrai.

I solicited Mary and my other sister, Markie McKaig, for company and support: “Since our mother grew up in Council Bluffs, Iowa, we can ride in her honor.” At the time we were 61, 59 and 53—old enough to know better, but young enough to say, Why not?

First step: find a good bike. Women who begin biking usually pull out an old bike from the garage. Men who take up cycling treat themselves to nifty new equipment.

Second step: train. Of course, the best way to prepare for a big bike ride is to ride a bike. All spring and early summer the three of us trained. We spent entire days riding trails around the city, longer and faster each week. We learned, the hard way, to use the bike rack, change flat tires, and patch blisters and skinned knees.

Iowa is a huge state, 500 miles straight across. But the Ragbrai route is never straight. It zigs and zags to take in as many small towns as possible. And Iowa is not flat, as we had thought; one area is nicknamed Little Switzerland. The ride is always the third week in July. To call it hot is an understatement. But it is enormous fun. For younger riders, it was a rolling frat party: at each rest stop they danced to fiddlers on flatbed trucks, drank beer and gorged themselves on barbeque, homemade pie and, of course, corn. We seniors chugged into each town in time to hydrate and hop back on the bike. Maybe we weren’t 10-year-olds after all.

T-shirts told the story. Our yellow tank tops read: We Be Three DC Biking Mamas. Others asserted: Seven Days on a Bike Makes One Weak! And: If You’re Not Having Fun, Lower Your Standards!

After Ragbrai we could conquer anything. We rode the AIDS ride from Boston to New York. We did the Tour de Canal, a two-day, 185-mile ride along the Chesapeake & Ohio Canal that benefits the national Alzheimer’s Association. We rode for cancer research and to support research on lungs, heart diseases and multiple sclerosis. Separately and together we have ridden in Australia, New Zealand, Canada and Europe.

After some 15 years of hard riding, we are slowing our pace but still biking. Our writer friend Tom Hoyer sets a good example. Tom has logged 22,000 miles by riding 20 miles a day around Rehoboth Beach, Del., since his retirement from government bureaucracy. He says he feels younger now than when he was working.

Whether you are 16 or 66, biking is a unique way to stay healthy while experiencing the joy of discovery. It may even help you to pray. It can, however, be addictive. Don’t say you weren’t warned.

The Black Hills of South Dakota are nature at its finest. I’m blessed to be able to ride the 110-mile Mickelson Trail here, created in the 1990s from an abandoned railroad bed. Cycling in these beautiful natural surroundings connects me to the landscape. The physical effort of pedaling and moving is akin to a walk on steroids. Car travel limits us to the sense of sight alone. Biking engages sight as well as sound and touch, so the experience is much more intimate and connected. Whether biking in the Black Hills or in Tasmania, I find this connection gives me a more profound experience of the places I visit.

For Heart and Soul

As a single traveler, cycling has afforded me a variety of healthy, fun and social vacations. I have ridden national rail trails in Washington, Wisconsin, South Dakota, Pennsylvania, Vermont and Virginia with groups from Rails-to-Trails. Some of the people I met have remained good friends for years. Memories of themed rides like the Mount Pigmore Classic will make me laugh when I am 90. I have cycled through Holland and France. I have enjoyed countryside, small towns and local people I would never have encountered on main roads. Everywhere, riding has offered a terrific combination of exercise and easy social connections. I have encountered beautiful places that nourish my heart and soul.

When I was 58, on a business trip, the cardiologist next to me opined, “If you ride a bike 1,000 miles per year, you’ll never have a heart attack.” Right or wrong, what did I have to lose? So began the sheer joy of riding a bike—a lot. I began tracking miles in 2006. I found that the pace that works for me is about 2,000 miles a year. For the past eight years I’ve had many unforgettable experiences. A few 100-milers, a couple of “hotter than hell” rides in Wichita Falls, Tex., in August and this year the Five Borough ride in New York City. So far, the cardiologist has been right: I haven’t died of a heart attack. And at age 66 I’m active, running a business in Annapolis, Md., while living in Fort Worth, Tex., and having as much energy as I’ve ever had. Biking brings me two incredible joys: delaying the onset of aging and the knowledge that I can go anywhere on this cool bicycle.