Christmas in Paradise: A lesson in flowers 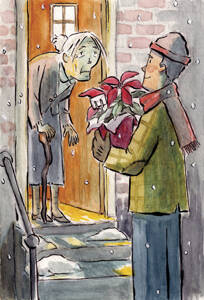 When I was small and Christmas trees tall, I used to work while others played.

My father was the “parish florist” in a tiny neighborhood in Philadelphia called Paradise. My father was devoted to his own holy trinity: the Catholic faith, the family and the community. He served his community with flowers for his entire life. Flowers, for my father, were a gift from God, as great as any other natural wonder—a full moon, the mountains, rainbows and sunsets. Flowers, he would remind me, are a steady force, softening even the toughest among us. Most of all, Pop taught me that flowers speak to the verities of heart and soul: love, honor, truth, prayer and sacrifice. His flowers taught me lessons that endure.

Many such lessons were learned at Christmastime, when the forest scent of Douglas fir wreaths, studded with pine cones and clusters of red holly berries, filled my world. When I was 13, my father asked me to help him make the wreaths. In Paradise, Christmas without one of Pop’s wreaths on your front door was something like a church without a stained-glass window. “Watch,” he said. “It’s time you learned how to make the wreaths.”

I stood next to his worn workbench, watching his hawser-like hands, textured from years of shearing, wiring and cleaning flowers, weave the branches of Douglas fir into a perfectly shaped wreath and then decorate it. He was patient, exacting and attentive to every detail as he crafted the wreaths with the precision of a diamond cutter.

At first I did not grasp that he was also teaching me the pillar of his work ethic: never sacrifice the right way of doing something for the sake of profit, even if it means blisters on your hands or no money in your pocket. “That’s the way God would want you to live,” he said. It stuck to me the way the first snowman you build sticks in your childhood memories.

Before long he placed a bundle of loose Douglas fir branches on an extra workbench, and I began to make the Christmas wreaths myself. My initial wreaths were more shapeless than shapely, and Pop let me know it. With his vigilant eye, he would slyly glance over and say, without turning his head, “Start over.” He wasn’t complaining, just explaining. I began anew.

I got better, and my father recognized it. He put the wreaths I had made in the shop for sale, which made me bounce with joy. Occasionally I would peek through the small window that opened to the front of the shop to check on whether any of my wreaths had sold. My eyes lit up when I saw Pop take one off the hook and hand it to Joe Sweeney, a steelworker.

When my Dad returned to the back of the shop, I said, “You just gave a wreath away for nothing, and it was one of mine.” He looked me in the eyes and said, “You’ll learn some day that it isn’t the money that counts, but in God’s eyes it’s the people who count.”

I worked side by side with Pop in the shop in Paradise for 30 Christmases, right up until he died. What I remember most is the universal Christmas flower, the poinsettia, known as “the flower of the holy night.” The poinsettia is a language that helps us communicate when words won’t. Its power to lift a sagging spirit comes as no surprise if you know the legend of the flower. It tells of a poor Mexican girl who had no gift for the cathedral’s altar on Christmas Eve. Out of desperation, she picked a bunch of unsightly weeds on her way to church. As she reluctantly presented her gift, a miracle occurred: The weeds were transformed into deep red poinsettias.

When I reflect on that legend, I always see the sorrowful face of an old woman staring at me from the dirty window of her front door after I had rung the bell to a creaking house. Pop had sent me out in his Ford panel to deliver her flowers.

“What do you want?” she shouted in a voice burdened with sadness.

She opened the door slowly. “Who sent them?” she asked. She was about 70 years old, bent over, with gray, stringy hair. She held a shillelagh in her hand as a cane.

“There’s a card inside the envelope on the package,” I said.

She asked me to put the poinsettia on the coffee table. When I did, she immediately opened the envelope and read the card. Almost instantly her face brightened. Then just as quickly she burst into tears. “It’s from my daughter in California,” she said. “I haven’t heard from her in nine years. Bless you, son. Bless you.” She limped over to a desk, opened the drawer, grabbed a $5 bill and handed it to me.

I handed it back. “Please,” I said, “use it to call your daughter.”

When I returned to the shop and told my father about the old woman, he smiled, reached for his wallet, took out a $5 bill and gave it to me.

My last chore every Christmas season was to haul six heavy fern plants and two huge chrysanthemum bouquets in gold-colored vases—donations from my Pop—across the street to the parish church, Corpus Christi, and decorate the altar. Business in Paradise was always good to him, and he wanted to show his thanks in the place from which he thought his good fortune came.

When I returned to the shop after dressing up the altar, he handed me a Douglas fir wreath and said, “On your way home, put this on the rectory door.”

Every Christmas morning as a boy, I would revel in my gifts under the tree—the clothes, the toys, the games, the Mickey Mantle bat, the Bob Cousy basketball—that is, until my dad would appear on the upstairs steps. He watched for several minutes; then, once he had gained my attention, he pointed to the church. I was not about to argue. Besides, he was right.

Christmas Mass was always memorable: the parish priests were dressed in embroidered silk vestments; the church resounded with organ music and the alleluias of the choir; the fresh flower smell mingled with the pungent aroma of incense; the altar boys were dressed in red cassocks and slide-rule-straight white surplices. It was wonderfully pious.

I vividly remember walking to Mass the first Christmas that I began to make the Christmas wreaths. As I passed the rectory, I glanced up at the Douglas fir on the door and wondered if it was one I had made. Nah. It was too perfect.

Fifty Years From the Beginning

These days the little flower shop in Paradise is gone, as is Pop, now in a more important Paradise. Still, whenever I see a Douglas fir wreath, I see his reflection—his thick crop of black hair, his chiseled Irish face and dark-brown eyes that sparkled like polished pinewood. I see my reflection in them, too—the teenager standing at the side of his father’s workbench.

I will always be blessed with a usable past, a wellspring of lessons from which to draw, as well as a strong faith, permanent, not only in the way my father lived his life through Christ, but also how he transferred to me the power in flowers—God’s gifts. Flowers were able to fill whatever holes within me needed filling, to nourish my faith and celebrate God’s goodness. This connection to flowers and my Catholic upbringing sustains, even saves, me.

The shop in Paradise gave me a sense of place and purpose, a sense of belonging, a sense of the Catholic teaching that exhorts me to continue to seek fulfillment in both a secular and spiritual life by being before becoming. Being has nothing to do with accomplishments, success or money; it has to do with the truths of the heart and soul: love, honor, truth, prayer and sacrifice—even now that I am tall and Christmas trees are small.

B. G. Kelley,a frequent contributor to America, is the author of The World I Feel, a book of poetry.

Show Comments (
5
)
Comments are automatically closed two weeks after an article's initial publication. See our comments policy for more.
Lisa Weber
10 years 11 months ago
"A usable past" is a most inspiring concept.  Finding a usable past is the challenge of everyone's lifetime, no matter what the past was.
10 years 11 months ago
Very touching.  Thank you.
David Smith
10 years 11 months ago
Lovely story.  Thanks.
georgette gavioli
10 years 11 months ago
My family I lived in Corpus Christi parish and we remember the Kelley shop.  I am one of five.  I became a ssj. Perhaps B>G> remembers my brothers George and Michael and my younger sister Diane. My twun Simone and I only went to first grade as we had some eyesight problems.  We had a wonderful life in Corpus christi and carry those memories forever.  There is an annual Corpus Christi reunion in the summer at Constata's on Academy Rd.  hope you can come.  PS I loved the article and the memories you recalled. Family values at their best!
Vincent Lynch
10 years 11 months ago
What a Christmas gift!  I, too, grew up in Corpus Christi Parish in the 1950s-60s.  I was one of those altar boys with the starched surplices (as described in the article).  Many of my classmates from our parish school still keep in touch...  and it has been nearly 50 years since we graduated! In fact, the author's sister, Rita, was a classmate of mine.  I also recently learned that our first grade teacher, Sr. Mary Vincent,  is still an active member of her religious order... still serving in Philadelphia!

At Corpus Christi School, when we turned out the classroom lights at the end of each school day (for all eight years) we all recited this prayer of gratitude for our longtime pastor... God bless Msgr. Kane!  Indeed... and God bless all of us who experienced this small neighborhood called "Paradise".