Class Act: What a teacher of English has learned from immigrants 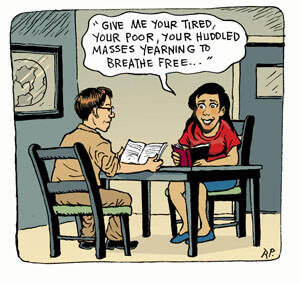 For the past year I have spent Monday evenings helping adult immigrants learn the English language. I volunteer in Arlington, Va., for the county’s renowned program, known as REEP (Arlington Education & Employment Program), one of the nation’s oldest adult programs teaching English as a second language. Often, the lead teacher assigns me to a separate room for one-on-one conversations.

The students come from Mongolia, Thailand and Cambo-dia; North Africa, Iran and Iraq; Mexico and Latin America. Each student is unique, and all are delightful in their own way. Some, well educated in their homelands, discover that in the United States they can find only menial work. Most insist they are happy caring for children or parking cars or digging gardens. Never mind that they might have been accountants, small businessmen, information technology consultants or pharmacists at home. Others are barely literate in their native tongue, having had little formal education. Many work long hours six or seven days a week. They broil in the hot sun replacing roofs or in hot kitchens turning out pupusas or pad Thai. Even hairdressing and nail polishing become exhausting after 10-hour days. And many leave their parents, spouses and young children back home and may not see them, except on Skype, for years at a time.

I am reflecting on my experiences in light of the Arizona law (SB 1070), passed in 2010, designed to crack down on immigrants who lack required legal papers That law has sparked a public, often angry debate about the status of such immigrants and their place in society. Last year I watched as nearby Prince William County enacted policies to frighten away “illegal” immigrants; it seemed to work. Even some people I know and love have startled me with their comments: “It’s black and white: they’re illegal, they need to go.” “They don’t belong here.” “They take our jobs and don’t pay taxes.”

Now I work among the “they.” When the immigrant students enroll at REEP, no one asks for their papers. They pay the fee and start learning: two hours and a quarter, four times a week, plus homework. In our conversations I often learn their stories, which sometimes amaze me, sometimes amuse me and sometimes break my heart.

Consider the young man from Guatemala who came here—sans papers—after his father was murdered on a city bus just blocks from his home at the end of a busy workday. Home was no longer safe for the teenager. The family had no money anyway to feed a growing boy. He crossed a hellacious desert to come here.

Or take the North African who sorrowfully told me of his wife and children back home. He barely makes enough to live on but sends every extra dime home for their care.

A beautiful young Nicaraguan girl told me a familiar story—no money, no jobs, no future and street violence to boot. For her there was no reason not to leave home for the United States.

Or consider the middle-aged African man forced to flee with his family from a home he had known for decades because he belonged to the wrong tribe. Or the fellow who fought back tears as he described how he had been separated from his father for 20 years until they were reunited here.

I think those Americans who despise and fear the newest wave of immigrants, who see things in black-and-white, who find a clear distinction between “us” and “them” might benefit, as Ihave, from volunteering to help students like mine. Occasionally, as I lean across the worktable in class, I think I am looking at my Scotch-Irish forebears. Despite their Catholicism they were more or less welcome here. Yes, some official in Toronto or at Ellis Island stamped their forms, but they were European, white and spoke a kind of English. If my ancestors had been Nigerian, I would likely never have been born here, except, perhaps, as a slave.

The Catholic faith did not stick with most of my ancestors’ descendants. Though it has stuck with me, most of the time I am a pretty lousy Catholic. Yet the church has taught me at least one valuable lesson: that God is the author of all life; that in a particular way, all women and men are made in God’s own image. No baby, then, should ever be called illegitimate; God does not create illegitimate children. Similarly, no one should ever be called illegal. It takes sinful humanity to make such a vulgar distinction.

Gregory Byrne, an adult educator who holds a master of arts degree in pastoral studies, is a freelance writer in Northern Virginia.

Show Comments (
3
)
Comments are automatically closed two weeks after an article's initial publication. See our comments policy for more.
Frederick Conron
11 years 7 months ago
When the first Europeans arrived on the East coast of the USA, the native Americans (Indians) did not murder them, nor expell them even though they (new iimmigrants) took some land & crops from the Natives who helping them to survive   . . .  the first Thanksgiving!

How we have changed since then! Have we lost our compassion? Have we now reverted to
"vulgar distinctions" of racism, albeit somewhat softened by a renewed look at civil liberties?
Those who claim to be Christian obviously do not remember the man who told us to love one another and pay our taxes ("render unto Caesar . . .").

We need to redefine our humanity.

Odette
ROBERT STEELE
11 years 7 months ago
Kudos to Gregory Byrne and to Odette for her thoughtful and truthful response.  I, too, have taught immigrants as a "freelance" tutor since January, 2002.  I love to help people learn English, and I enjoy so much the fact that, when I start, I may not be able to communicate with my student at all, but, after months we can communicate and become friends.  Usually, I go to the students' houses or apartments, but I also tutor through our parish church.  I love especially working with Mexicans or Guatemalans, and recently I started helping the 6-year-old son of my first hispanic students!  God bless them all, or "Dios te bendiga" as I tell the Guatemalans at the Sign of Peace at the Spanish Mass, where my husband, myself, and one other man are the only "white" people there.  I feel more at home there than I do at a typical suburban parish.
Ana Blasucci
11 years 6 months ago
Leave aside the question of how we should respond to illegal immigration.  We have to do two things however disposed we are on the matter.  We must truly respect each other fraternally, and use reason and logic not to dehumanize the issue but to find truth and be not consumed by distracting or unproductive emotion.
Mr. Byrne engages in many a fallacy that will prevent us on all sides from coming together on immigration.  He appeals primarily to pure emotion rather than backing it up with facts or true analysis.  His social vision also indicts those who substantially disagree with his stands, an unfortunate tendency in the Church at large (witness the remarks of Roger Cardinal Mahony toward the Arizona law, and by extension at Arizonans and their many supporters).
There is also the fallacy that because life is difficult somewhere else, one is entitled to go to another place and to totally disregard its legal system, put in place to keep order and peace in any place worth moving to (and, in the U.S., instituted at great initial cost).
There is the "yes, but..." fallacy.  Mr. Byrne acknowledges that his own ancestors, yes, came LEGALLY to the U.S. and Canada.  But, the only relevant difference he sees between they and the illegally entered folks of today is their papers and the stamps impressed thereon by immigration officials.
This is analogous to buying the "marriage is just a piece of paper" position.  What did those papers and immigration stamps signify is the question.  They signified that the new entrants were met by the representatives of that society and found to be unlikely to adversely affect the society.  They were cleared medically, found to be of acceptable character, and had means of support.  A society has the right to make these determinations, if in a reasonable and humane manner.
Mr. Byrne deplores the word, "illegal" in the context of those who arrive in a manner contrary to law.  He compares it to "illegitimate," as in "illegitimate child."  Not so.
"Illegitimate" is a qualitative distinction of the very nature of something (and indeed not a fitting description of a child nor of any person).  "Illegal" is merely an administrative distinction.  "Illegal immigrant" and "illegal alien" are shorthand ways of saying "persons who have arrived in an illegal manner."  We don't have time to say all that each time.
As a teacher of language, Mr. Byrne should allow and encourage us to take language back.  If a newcomer came in an illegal manner, say "illegal."  If he or she suffers, say that too, and loudly.
The distorted language of political correctness and of emotionally over-charged charity can only muddy the waters of the debate, and keep all parties talking past each other.  Both Abe Lincoln and St. Paul expounded versions of the principle that in order to influence a person, one must essentially use that person's own language, not one's own.  Of course they didn't mean English as opposed to Swedish, or Greek as opposed to Aramaic.  The important thing is respecting the other's values and what he holds important at the moment, and conceding his legitimage points, even if one disagrees.  At length, he might then be converted.  Less likely so if one indicts him or berates him or refuses to recognize that he might be right about some things.
Let's all knock off the sniping and, in the spirit of fraternal correction, together shepherd each other to the best place for our country and for all newcomers.  Then, nobody will be completely satisfied, but the result will be one that all can respect.