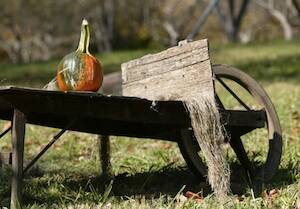 Gratitude is a hot topic in both the secular and religious worlds. In the psychological community, there is a renewed emphasis on “savoring,” spending time consciously being grateful for what one has. This would not have surprised St. Ignatius Loyola, who used the words savor or relish (depending on the translation) in the Spiritual Exercises to describe dwelling with a powerful experience in prayer.

Several contemporary books point to gratitude as an essential element of a healthy relationship with God. Mary Jo Leddy’s popular Radical Gratitude strives to move readers from the “perpetual dissatisfaction” fostered by Madison Avenue to an appreciative awareness of what we already possess. And this year Charles J. Shelton, a Jesuit psychologist at Regis University in Denver, describes the virtue in The Gratitude Factor as a quality that enriches love, contributes to both the individual and the community, fights negativity, relieves stress and limits our selfish desires.

The Thanksgiving holiday is a fitting time to revisit the virtue of gratitude. But are there reasons to be thankful? In the wake of persistent unemployment and financial woes, after an election in which the country seems more divided than ever, in the midst of continuing violence in Afghanistan and in view of terrorism here at home (even U.P.S. is not safe) and abroad (the carnage in the Syriac Catholic cathedral in Baghdad appalled even seasoned observers), gratitude may seem not only inaccessible, but a ridiculous thing to suggest.

Yet in times of struggle gratitude is critical, lest we move into despair. And we need not deny the dark to see the light. So what are some things for which we can be grateful?

To begin with, the elections transpired peacefully. Despite the over-the-top vitriol, new lawmakers were elected, old ones left the stage and in January the political landscape will change decisively. That this transpires without widespread violence marks our country as fortunate. Compare our experience with that of other democracies—Kenya, for example, whose last presidential election led to weeks of killings. As President Gerald Ford said after the Watergate crisis, “Our Constitution works.” We can savor that.

And despite the stumbles of the Obama administration, there are many bright spots. Because of the passage of the health care legislation, millions of poor Americans have access to medical coverage. Moreover, we live in a country with potable water, functioning hospitals and well-trained doctors. Millions of others cannot say this. The economy, too, which seemed on the verge of complete collapse in 2008, is slowly on the mend. President Obama’s recovery package was both flawed and politically costly but probably saved the national and international economy. Debates surrounding immigration hid the fact that many new immigrants do jobs, for substandard wages, that otherwise would not be done, like care of the elderly infirm. And a moment’s thought about Afghanistan should prompt enormous gratitude for members of the armed forces, who put their lives at risk for the rest of our country.

But our gratitude for what we have should not blunt our zeal for justice for others; it should inspire us to struggle for those who have not.

In the Catholic Church things may also seem bleak. The sexual abuse crisis is now a worldwide one, and the stream of reports of decades-old crimes shows few signs of abating. But there was much hopeful news this year. The enthusiastic reception given the pope during his visit to England to beatify Cardinal John Henry Newman surprised most observers, who had predicted a tepid response. Besides Newman, several other colorful new saints, like St. Damien of Molokai, St. Mary MacKillop and St. André Bessette, gave Catholics something to relish. On the local level, priests continue to work hard in the face of declining vocations to ordained ministry; women and men religious toil in often thankless jobs; and lay leaders take on roles of increasing responsibility. Those who collaborate in parishes labor in ministries that touch almost every aspect of the spiritual life: adult Christian initiation programs, bereavement groups, spiritual direction, young adult ministries, religious education programs for children and adults, parish book clubs. The church is alive.

For many the causes for gratitude are more personal. Even in difficult times we can be thankful for our families, friends and co-workers. The cause of the greatest gratitude may be the hardest to describe in words: our personal relationship with God. And though Easter is far off, we can be grateful for the ultimate sign of hope: Christ is risen.

As we savor the turkey and stuffing and enjoy the cranberry sauce, Catholics are called to relish the gifts that God gives us every day, and to savor the sparks of light that illumine the dark.

The Editors
Show Comments (
4
)
Comments are automatically closed two weeks after an article's initial publication. See our comments policy for more.
Frederick Conron
11 years 6 months ago
Yes, be grateful for the many blessings you have, but one of them is NOT the best health care in the world.

I was raised in New York State, and my middle-class hard-working parents thought many times before going to any doctor for treatment. What good are well-trained doctors and excellent facilities if insurance companies deny you treatment for a host of reasons? And what about all the millions who have NO insurance? They must line up and wait for hours in an ER and be given 3rd class service.

I now live in a country (Canada) where EVERYBODY is given complete health care at no out-of-pocket expense to them. I had a quadruple by-pass in 2000 and left the hospital with the same change in my pocket as when I entered it. I now have terminal prostate cancer and receive incredibly good care right here in my home to which a doctor comes every other week. My medications are greatly subsidized by the Quebec Health Care system (max. $830 per year) and I receive weekly palliative care including massotherapy, psychological and spiritual counselling, free transport from home to hospital and return, a handicap parking tag and many other services - all at no cost to me. My taxes are slightly higher than what my family pay who have remained in the U. S., but considering the benefits we receive, not at all burdensome.

Tell me what I do not understand. Two wars, 750+ military bases scaattered around the world, a non-functioning highly partisan government at each others throats and billions upon billions of waste (ear marks, etc.). Are Americans blind or what? The monies wasted could have built the veery best health care in the world, but, alas, that will not happen in the U. S. I am sure.

Doesn't anybody care about the NATION anymore?

C Walter Mattingly
11 years 6 months ago
Conray,
Perhaps a part of what you don't understand is the degree to which that the clear vision you possess is limited by the rosecolored shades that distort what you see.  Aside from the US medical clinics getting wealthy for treating the 300,000 Canadians sufficiently well-off to purchase what they obviously consider more timely and superior health care at the borders, recognize that you undercount wars severely. That military budget, which subsidized the freedom and democracies of Western Europe and yes, Canada, saved all of Europe at least once and Germany twice from nationalist and communist socialist tyrannies the last century. And that is counting conservatively. Japan, South Korea, etc might also count themselves fortunate to be spared the fate of their neighbors.
The part you might have difficulty comprehending,  in truth, is why did America go to all this expense and trouble in blood and monies to provide this sustaining welfare for foreign nations.
Catherine McKeen
11 years 6 months ago
Having described all the active lay ministries in parishes, you conclude:  "The church is alive."

Yes, but the dead hand of episcopal authority still hangs over all attempts at real lay participation in diocesan policy or personnel (at least in my diocese).

It's still "pay, pray, and obey" for most of us.
Frederick Conron
11 years 6 months ago

Where in heaven's name did you get such outrageous "cross-border" health care figures?

Ask any Canadian what social benefit he would LEAST LIKELY have taken away:  the answer is clearly our wonderful health care system.  MY open heart by-pass was NOT done in the USA and I know of nobody in my rather large circle of acquaintances who ever chose health care in the USA over the Canadian variety. Of course, when a Premier of New Brunswick elects to PAY for some special service which was never clearly defined, that makes the headlines.

I am VERY GRATEFUL for all the benefits we have at our disposal and, for the life of me, cannot understand why anybody else would not want the same.

Please God grant that the age of unilateral and unjustified invasions of sovereign countries is gone! Save your money and spend it where the people  need it most:  education and health.