The Other Haiti: Rebuilding quake-shattered lives beyond Port-au-Prince 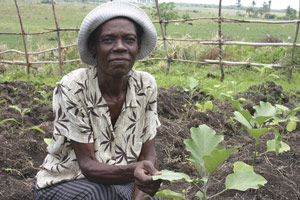 Try to imagine Haiti, ravaged by a massive earthquake last January, and images of rubble, masonry at crazy angles and huge homeless camps come to mind. Port-au-Prince, the capital, is still dotted with the camps that people spontaneously formed after the quake and white Land Cruisers of the United Nations and other relief agencies. While cleanup is underway, collapsed buildings and debris overwhelm the landscape. In Léogâne, west of the capital and close to the center of the quake, barely a building is left standing. To see how the nation is changing and to glimpse its future, you have to take a road out of Port-au-Prince.

I recently traveled to Haiti for Catholic Relief Services to document the plight of rural Haitians. There I observed a number of projects fully or partially funded by C.R.S. that provide short-term jobs, grant microloans to small businesses, subsidize daily meals for Catholic schoolchildren and help local communities plant trees and grow food. A small agricultural school teaches men and women farming techniques to enrich the soil, increase crop yields and channel runoff. I also saw how the Haitian countryside has been affected by the quake.

In the southern and western departments (or provinces) island life is beginning to look more normal. The people here are poor, but the buildings are intact. Yet the quake has brought enormous pressures: Some 110,000 internally displaced people live in the Sud Department—more than the 80,000 who live in the two largest camps in Port-au-Prince to which the prominent visitors and film crews come. Many of the displaced people now in Sud lost their homes in the capital during the quake and have returned to their rural roots in these provincial towns to stay with family. The two neighboring departments of Grand Anse and Nippes also “host” displaced Haitians from the capital, almost 200,000 of them. With their arrival, household sizes in Sud have swelled by an average of five people. In rural areas like the small coastal town of Carrefour, I met many families who had left Port-au-Prince.

Meprilant Desir is philosophical when he talks about making ends meet with extra mouths to feed. “God gave them to us, so we make do. Some days we get enough, some days we don’t,” he smiles. Desir now supports nine children, four of his own and five who fled the quake. Recently widowed, he is caring for them alone. Straight across the dirt road that runs through the town, his neighbor Frisca Saint Juste, 23, has a similar story. He is sheltering his cousin and his cousin’s three children, plus his mother and father.

Both Desir and Saint Juste have planted seeds they received as part of a church distribution at a seed fair. They are both tending strips of peas and corn. The peas provide vital nitrogen to the soil for the next crop. Saint Juste depends on the crops he grows behind his small house. His cousin helps out, but it is backbreaking work, especially with no nearby water source to irrigate the crops. Saint Juste explains to me how bringing water closer to the field, with a community water pump, for instance, would greatly help him and his neighbors.

Desir, a man with a heavy weight on his shoulders, is nevertheless optimistic about the future. He attributes his optimism to the new agricultural venture. “I got the seeds at a seed fair, and I know enough not to eat them but to plant them,” he laughs. “I am stronger now, I have more energy, and I have the energy to plant more.” He has ambitions to plant peanuts next.

For decades, sloping hillsides bare of trees have been the defining feature of rural Haiti. Massive deforestation has led to soil erosion and frequent, damaging flooding. It is one of the biggest problems facing Haitian agriculture in one of the poorest parts of the poorest country in the Western Hemisphere. Since most people live from hand to mouth, few worry about cutting down the last tree for charcoal if it meets their needs for that day. The road around the southwest coastline detours often through fords and along the beach, where bridges and road surface have been washed away. The lower slopes have long been used for crops and grazing livestock. Higher up, the trees have been felled for fuel, principally to make charcoal for cooking.

Along the coast in Bon Pas, at a little agricultural school run as a partnership by C.R.S., the U.S. Agency for International Development and Caritas Haiti, a dozen men and women are planting cassia tree seedlings. Hundreds of plastic pots dot the hillside. The cassia seedlings are destined to return some life to the denuded hillsides and to protect the earth from erosion. The trees will give nitrogen to the soil and grow back well after they have been trimmed for charcoal wood. It will take many years for the cassia seedlings to mature, but the work to stop soil erosion and flooding has already started.

On the hillsides that rise behind the coastal strip of agricultural land, drainage channels have been dug to divert rainwater away from crops and houses and safely into natural water courses. Local villagers who work for Catholic Relief Services as part of a cash-for-work program provide most of the labor. The program aims to provide vital infrastructure work and local employment, while it also injects badly needed cash into the local economy. (In Port-au-Prince I saw how well the drainage channels work during a storm. When the rainy season started in April, the drainage channels built on the hilly Petionville Club camp prevented flooding and directed the water down to the municipal drains.)

At the agriculture school, smallholder farmers like Desir and Saint Juste can also learn about new crops and techniques to increase their yields. Rows of leeks, tomatoes and eggplant run across the narrow strip of land at the school. A woman named Jeanne Ornelie Desir, (no relation to Meprilant) tells me she has planted eggplant, tomatoes, leeks and carrots. Some, she explains, are for her family, but she is also planning on a large enough harvest to sell produce at the market. She and her husband support a family of 18: six of their own and 12 quake émigrés. “The program has helped us a lot,” she says. “Now we can have beautiful gardens with vegetables so we can eat. And we are planting trees to rebuild the land.” Desir shares plant care tips with her friend Elisme Amanta, who is busy among the tomato plants. Amanta has three extra mouths to feed at home since the quake.

Life Outside the Capital

In the provincial capital of Les Cayes, the schools are overflowing with city children who have come to stay with their country cousins. Transplanted parents complain that they are being asked to pay school fees in Les Cayes when they already paid for schools in Port-au-Prince. But many of those schools no longer exist. In Haiti there is no nationwide public school system. Virtually all Haitian schools are run by the private sector, and Catholic schools are common. The school feeding program has been stepped up dramatically to reach the quake émigré children. The number of children who receive a hot meal at school every day doubled this year from 45,000 to 90,000, and C.R.S. and its partners planned to reach 135,000 children by August.

“Let’s keep the I.D.P.’s [internally displaced people] back home in the country, but we have to give them opportunities,” says Dr. Jude Marie Banatte, who coordinates Catholic Relief Services programming out of Les Cayes. “This crisis has created an opportunity to decentralize the country,” he explains. A daily hot meal is an important incentive for families to stay in the province; but, as Dr. Banatte explained, people need opportunities. Boosting livelihoods through agriculture, cash-for-work and microfinance (small loans for family businesses) are all designed to meet this goal.

Places like Les Cayes and Sud Department need to be developed if Haiti is to decentralize its population, develop its infrastructure and create viable employment opportunities outside the capital. The Haitian authorities strongly encourage decentralization, which has been tried before. The quake has given it a new urgency.

“The piece that has always been missing is involving civil society, local groups,” explains Dr. Banatte. “All the programs, the agriculture, the microfinance involve local groups.... We are teaching these communities about watershed management. The community understands, protects and manages the land that they are dependent on.” Civic involvement—perhaps even that missing piece can now be supplied.

As I traveled back toward Port-au-Prince, I began to see more quake damage and an increase in traffic. Although international attention has focused on this devastated, choked, dusty wreck of a city, the key to a better life for Haitians lies back down the road, in the provinces.

Listen to an interview with Tom Price and Nora Collins of CRS abotu the agency's work in Haiti.

Tom Price is a senior communications manager for Catholic Relief Services, the official international humanitarian agency of the Catholic community in the United States.