Around the World I've Searched for You: Julia Roberts embarks on a quasi-spiritual journey in 'Eat Pray Love' 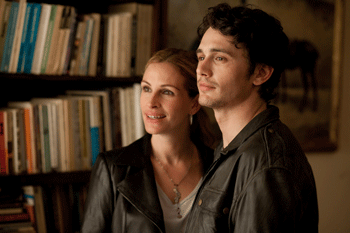 As readers of the phenomenally successful 2006 best-seller Eat Pray Love know, the title says it all. Elizabeth Gilbert’s memoir about her divorce and year-long alliterative trek to, successively, Italy, India, and Indonesia has been given the slick big-screen treatment with Julia Roberts at her most ingratiating. Set against a backdrop of exotic locations, mistily captured by cinematographer Robert Richardson’s lens, Roberts plays Gilbert with plenty of old-style movie-star charisma.

Though the narrative charts Gilbert’s spiritual journey, albeit in a non-Christian context, the film is, at heart, scarcely more profound than “Sex and the City 2.” To give credit where it’s due, films about this sort of self-discovery are rare, so we’ll give this one some brownie points.

While not exactly dull, the film unfolds at a meandering pace. In the opening scenes, we observe Gilbert’s dissatisfaction with her marriage to dilettantish husband Stephen (Billy Crudup); he’s a baker but has now decided he wants to continue his education, a suggestion that Gilbert receives with as much consternation as if he had informed her he was Jack the Ripper.

After attending an Off-Broadway play, she meets the lead, David (James Franco), a likable 28-year-old struggling actor and yoga teacher who Gilbert dubs, “Yogi from Yonkers.” They commence an affair.

The age differential and lack of common ground eventually give way to more dissatisfaction for our soul-searching heroine, and she breaks with him, eschewing his paradoxical suggestion that they allow themselves to be miserable for the happiness of being together.

So off she goes, feeding her face in Italy, attending the ashram of David’s female guru in India, and then returning to Bali and the wizened medicine man (Hadi Subiyanto) who, only a year before, had read Gilbert’s palm while she was there on assigment as a journalist. He predicted financial ruin and recovery, as well as a pair of marriages.

In Italy, where she goes to “regain her appetite for food…and life,” she rents a dilapidated but character-filled pensione, bonds with Swedish traveler Sofi (Tuva Novotny), and befriends the latter’s coterie of Italian friends, all the while consuming great amounts of pasta, all lovingly filmed as Mozart’s “Queen of the Night” fills the soundtrack. Gilbert ultimately learns the pleasures of dolce far niente, the sweetness of doing nothing, and at the end of her stay there, prepares a Thanksgiving meal for her friends.

In chaotic, bustling India, she learns that the guru she’s traveled so far to see is, in fact, visiting New York. Gilbert throws herself into the Ashram’s regimen anyway, meditating, humbly scrubbing floors, and even briefly attempting a vow of silence. She befriends and counsels young Hindu woman Tulsi (Rushita Singh) who is dreading her impending arranged marriage when all she would like to do is go to university. The lengthy wedding sequence prompts Gilbert’s reminiscence of her own wedding to Stephen.

Gilbert ultimately bonds with a wise-cracking Texan (Richard Jenkins delivering the film’s standout performance), who initially irks but ultimately wins over Gilbert with his straight-talking wisdom. And in the most (perhaps only) riveting scene in the film, he recounts the sad circumstances that set him on own soul-searching mission. In plain terms, he tells her she must learn how to control her thoughts. If she clears her mind, he says, God will rush in.

Finally, she communes with an elephant, after which Gilbert finds herself back again in Bali where she’s momentarily disconcerted when the smilingly toothless old Ketut fails to recognize her, or remember his prophecies. Happily, his memory lapse is short-lived. While in Bali, she befriends a medicine woman (Christine Hakim), encounters a tousled expatriate Brazilian, Felipe, played by a jowly Javier Bardem. They “meet cute” when he knocks her off her bicycle rounding a bend.

Will she abjure her hard-won feminist freedom and self-sufficiency for the South American heartthrob? You’re kept guessing till the end.

Ryan Murphy, creator of the hit TV series “Nip/Tuck” (that extraordinary amalgam of quality and trash), and the phenomenon “Glee,” has done far better with “Eat Pray Love” than his last film, the adaptation of Augusten Burroughs’ “Running with Scissors.” Other critics who have read the book (I haven’t) say the movie is a fair enough representation of it. Still, Murphy must take some of the blame for the artificial, aphorism-laden dialogue (screenplay by Murphy and Jennifer Salt) and the film's occasional slow patches. Another problem: the audience’s (at best) moderate sympathy for a woman whose quest for spiritual enlightenment can’t help but seem so unremittingly self-centered.

Viola Davis, this year’s Tony winner for “Fences” on Broadway, and the distraught mother in the movie “Doubt,” is solid as Gilbert’s friend Delia. Other supporting roles are well played, too.

The spiritual aspects of the story are negligible for all the high-minded talk, though there’s a nice scene near the beginning where the distraught Gilbert tearfully calls on God to help her. “I’m a big fan of your work,” she begins awkwardly before morphing into a more traditional entreaty.

The book clearly resonates with millions of readers, and there’s no reason to think the film won’t do likewise. For everyone else, it can be enjoyed as a lavish travelogue. And it will most certainly set the taste buds watering for one of those delectably arranged plates of pasta. Others may even leave their local cinema with a hankering to clear their heads with an act of quiet meditation.

Ultimately, Gilbert learns the value of balance in one’s life (summarized glibly at one point as “not loving anyone more than you love yourself”), but you may be left pondering why she had to leave her husband and travel clear around the world to figure that out.

Harry Forbes is a film and theater critic and the former director of the U.S. Conference of Catholic Bishops’ Office for Film & Broadcasting.