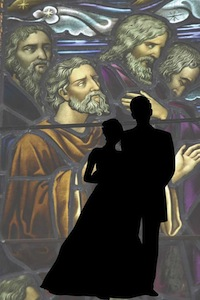 When it came to planning our wedding and reception, Geoffrey, my husband, made only three requests. First, he wanted to be married in a suit that he owned. The thought of walking down the aisle in something rented irked him. So we went to Chicago one afternoon and, feeling young, broke and giddy in the humorless clothiers, bought a suit. Second, he wanted an open bar at the reception. People had come a long way for the wedding, he reasoned; the least we could do was provide free drinks. Finally, he wanted a litany of saints. It seemed the honest way to begin: asking for help. We knew, if not in our hearts then at least intellectually, that marriage was tough and figured we could use all the help we could get. So it was that we walked down the aisle at our wedding arm in arm, he in a suit that he owned, I in a dress his mother had sewn for me, chanting a litany of saints.

In preparation we had made a long list of the names we hoped to include in our litany: the names of saints we admired and saints our family members had been named after or had chosen for their confirmations. With priestly permission, we bent the rules slightly at the Mass and at the end of the litany invoked a handful of deceased holy men and women dear to us—not yet canonized or beatified, but whom we asked for prayers. It was beautiful. As I heard the names chanted, I could imagine the beloved dead helping us on our way. All our family and friends, even those who had died, had gathered there to offer prayers and give blessings.

The summer we married I had been out of college for a year and was set to begin teaching at a prep school a few days after our wedding. I was to teach the Iliad and Macbeth, yet the excitement of the wedding had left me less prepared than I had hoped to be. Geoffrey was slated to take his graduate school exams in a few months but had spent most of the summer learning to make furniture rather than studying. We had loads of student debt and little money, but mostly I didn’t think about any of that.

I just felt tremendously grateful to have found Geoffrey, even if finding him meant making life more complicated or changing my plans. We were so in awe of one another, just thrilled that the other person existed. How had I found a Catholic who shared my love of books, who could be quiet and serious but also the life of the party, the man who closed down the bar? He loved his family, could fix anything, liked the play I had written and laughed at my jokes. He was good-looking and athletic, kind to everyone and easy company. I admired him. I kept telling my friends that I couldn’t wait to marry my boyfriend and become his permanent girlfriend—his wife.

I knew marriage was more than living together and that it was forever. I also knew that the track record for marriage as an institution was uneven at best. Some friends and family even mourned my decision. They feared, perhaps rightly, that I would never write again or go to graduate school, or that I would be changed, utterly, with no turning back. Geoffrey and I talked about all these things, but no amount of talking could undo the unknowns or make it any easier to move ahead. Nor did confronting the unknowns make us less ready to start a life together. There have been days, though, when we have wondered how this will all work out.

Before he was elected pope, Cardinal Ratzinger gave an interview to Peter Seewald that was published in the book Salt of the Earth. There he said something that addresses the reluctance many in my generation feel about committing themselves in marriage. He said: “Indeed, love means being dependent on something that can perhaps be taken away from me, and it therefore introduces a huge risk of suffering into my life…. Before having to constantly bear this risk, before seeing my self-determination limited, before coming to depend on something I can’t control so that I can suddenly plunge into nothingness, I would rather not have love.” That’s saying no to love. But, as he goes on to explain, “the decision that comes from Christ is another: Yes to love.” And that yes alone brings us to ourselves and makes us what we should be. “I think that is the true drama of history,” he said, which can be “reduced to this formula: Yes or no to love.”

Indeed, love has made me more myself; I am more myself than I was before I was married. My husband is a daily source of strength and joy, an inescapable reminder of God’s love for me. But it has not been easy. The unknowns are still unknown, and things in any kind of life rarely go according to plan. All we can do is all we know how to do: walk forward together, leaning on the stories of those who have gone before us, hoping that we might become loving persons, open to all the help we can get and asking all you holy men and women to pray for us.

Thank you for saying "yes" to love and being open to all that God wants to give you through each other. There is nothing so beautiful as a faithful marriage that witnesses to God's presence in our lives.

Julie Varee
9 years 8 months ago
After the painful ending of my first marriage, I thought I'd never again be able to say "yes" to (romantic) love. God gifted me with a second opportunity to experiece a loving marriage, however, and now I'm a newlywed in my 50s. Life is filled with surprises! Joining one's life with a spouse involves risk and sacrifice, but a marriage viewed as a true partnership that also includes God involves great joy. I pray for happy and life-giving marriages for all who choose to make the journey!
Yujia Zhai
3 years 7 months ago
I don't think a marriage that prevents you from going to grad school is worthy. Marriage should allow each other to be better versions of themselves, including careers. Why spend all the money and effort into this "marriage" thing by sacrificing career? This is not what marriage is supposed to be, I think.
Advertisement

This article also appeared in print, under the headline “Saying Yes to Love,” in the May 31, 2010, issue.