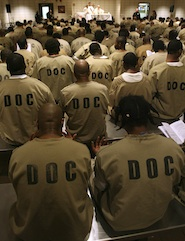 Recession-driven prison closings may provide state lawmakers an opportunity to promote a more rational approach to criminal justice that still puts public safety first. Draconian sentences even for low-level offenders have long crowded penal facilities, and over the past two decades the building of new prisons has increased dramatically. In the 1960s and 70s an average of four prisons a year were under construction, but in the 1990s the average jumped to 24 a year. Correctional costs now swallow up huge portions of many state budgets. According to a March 2009 report by the Pew Center on the States, total corrections spending has reached an estimated $68 billion, an increase of 336 percent since 1986.

For some states, this spending has produced disquieting signs of skewed spending priorities. In Michigan, for example, one of the states hit hardest by the recession because of its ties with the ailing automotive industry, the state government spends more on corrections than on higher education, despite having already closed half a dozen penal facilities.

Other states are considering early release for low-level offenders who seem to present little risk to public safety. Arizona, New Jersey and Vermont reduced the sentences of thousands of probation and parole violators who had been returned to prison for violations of various kinds. Early release, though, can work well only if strong re-entry programs are in place—initiatives that provide help with housing, jobs and substance abuse. According to Marc Mauer, executive director of the nonprofit Sentencing Project in Washington, D.C., the commitment to re-entry programs has grown over the past decade—a positive sign of a practice he hopes will continue.

Two of the most effective forms of community corrections, probation (after conviction but before incarceration) and parole (for those who have served time and are eligible for release), have long been underfunded. Yet when adequately funded, both probation and parole can be effective for limiting the overall incarcerated population and reducing recidivism. But with nearly 90 percent of corrections funds devoted to incarceration, Mauer points out, only 10 percent remains for probation and parole. In many jurisdictions, caseloads are too high to permit adequate supervision and services for those released. Cuts in those areas are being made by cash-strapped administrators—a case of being penny-wise and pound-foolish. The Pew report notes that in Sacramento County, Calif., 76 probation officer positions, or 9 percent of the total force, are on the chopping block, as are drug treatment beds.

Not all parts of the country are closing prisons. Parts of the South have been moving in the opposite direction. Florida shows no signs of closing any of its penal facilities. And Kentucky has the fastest growing prison system in the nation because of various tough-on-crime measures, like the so-called persistent felon law, similar to the “three strikes and you’re out” laws of some states, as well as such other measures as reclassifying some misdemeanors as felonies, which carry much harsher penalties. Kentucky’s prisons have become so overcrowded that it has been obliged to pay local jails to house the overflow, and many inmates sleep on the floor. As the Pew report observes, overincarceration is subject to the law of diminishing returns; the greater the number of offenders imprisoned, “the lower the payoff in terms of crime reduction.” Similarly, incarcerating more offenders can lead to “the replacement effect,” especially in regard to drug crimes: Other drug dealers quickly take over the territory left open by the person behind bars. This is especially true of young people, who are more easily drawn into criminal activity than those in their 30s and 40s. So unless society addresses the demand for drugs, the supply of potential sellers seems virtually unlimited.

Corrections officers unions and local communities whose economies depend on prisons have resisted prison closings. In some rural areas, prisons serve as large local employers, and local employment in turn supports a number of small businesses—a chain of economic dependency. Such resistance is understandable, given the paucity of employment opportunities in such regions, but it raises an important question: How many prisons exist because of the secure jobs they provide rather than for the punishment of crime and promotion of public safety? Robert Gangi, who heads the Correctional Association of New York, has noted that the “administration of justice shouldn’t be twisted into a job program for economically depressed upstate communities.”

It is time to put in place programs and policies that will depend less on funding and political issues, like those that created excessively stringent drug laws, and ensure a more rational, effective approach to public safety.

One might hope that  lack of money would force genuine improvements in the penal systems and while there is some movement in this direction, there is also a lot of resistance.  We continue to operate more from a place of punishment and vengeance than one of correction and maximizing potential.  Michigan does not seem to be seriously interested in even revisiting the laws that sentence juveniles to life in prison.  Legislators are unwilling to risk their real or perceived political futures by advocating for  the programs and policies that can, over time, address the needs of the total community.   Maybe if the Church lived as if they believed this too was an important pro-life issue, we would have more success in changing hearts.

In California the prison system is completely broken. As Mary Therese noted, it is not about rehabilitation and change but totally about vengence and punishment. Even while under federal court order to improve overcrowding and health care for prisoners, our governator and his finance department has cut rehab and education programs almost completely. Where also is the church? We have a huge number of vacancies among prison chaplain positions - the only ones who seem to advocate for prisoners at all. Meanwhile the neocons whip up a fury of hate and fear over so-called 'early release' of non-violent, minor criminals and probation departments work overtime to bust parolees so as to return them back to the system.

Thank you for this excellent piece. In addition to probation and parole, there is another aspect to the issue that is rarely talked about: the pretrial detention of suspects who have been arrested and are awaiting their court appearance. There was an excellent three-part series on NPR in January highlighting the issue:

Two-thirds of our nation's inmates are petty, nonviolent offenders who are only there because they cannot afford bail. The bail bonds industry has immense power and has created a system where arrestees are held in prison (pretrial, mind you, meaning that they haven't been convicted of anything yet) simply based on their inability to pay, putting public safety in the hands of private interests. Bail associations make campaign contributions across the country and have successfully lobbied to reduce or eliminate county-run pretrial release programs, which give the arrestee the opportunity to rejoin their jobs and families, and which, in many cases, have lower 'fail to appear' rates than bondsmen can claim.

There are four states in the US that have currently banned commercial bond because of the inappropriate influence they have had over the justice system, and the disparity they cause between rich and poor defendants. Any comprehensive reform of our corrections system needs to include a reform of pretrial detention.

One way to counter the high rate of drugs, violence, and crime we find in our society might be to follow the example of Norway, which provides extensive instruction and guidance in religion in all of its public schools.  In the earlier grades the study mostly covers the church of the state, but in later years it covers most of the great religions of the world, Islam, Judaism, Hindi, Buddhism, even secular humanism.  Being introduced to something larger than themselves and having moral instruction is likely one element of this country's social success relative to ours. Likewise Sweden and Germany include religious instruction in their public schools.  Failing this at least we might make vouchers available to our citizens, especially in inner city neighborhoods, where parents could have the opportunity to expose their children to a moral system in their school experience. In all the above countries parents can opt out their children if they so choose.

Also, there has just been published in the NYTimes an article stating that with the increased incarceration of violent felons, the rate of serious crimes in Los Angeles has fallen to the lowest rate in 2 generations. The residents of the inner-city neighborhoods are saying for the first time in decades they feel they have taken back their streets.  They even used some of the same architects of the Giuliani reforms that so benefited New York. This occurred despite the recession, which many sociologists expected to increase crime statistics.

Perhaps if we combine this with improved rehabilitative efforts cited in the article and religious education or vouchers in our inner city schools, the carrot and the stick, we can have a more crime free and peaceful society.

10 years 5 months ago
It is true that community corrections is underfunded and has been traditionally for many years.
Professional community corrections programs can manage many offenders safely in the community.
It's also true that many non violent offenders (often for drug posession) are incarcerated.
Still, the the system's first priority is community protection.
So pre-trial must consider not only the nature of the offense but likelihood of appearance in court for those who could be released.
Similarly, even for the non-violent, the issue of cooperation with community corrections and treatment must be taken into account.
Finally, there is the issue of making victims whole and not only focusing on the offender.
Vengeance is not a value for the criminal justice sytem.
Reasonable sanctions, taking into account all of the above, should be the goal at stake,
Advertisement

This article also appeared in print, under the headline “Administering Justice,” in the March 15, 2010, issue.