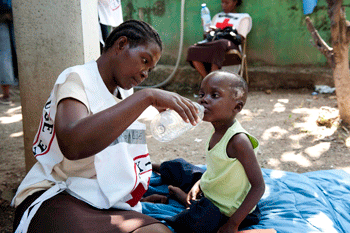 Since the earthquake in Haiti on Jan. 12 that killed upwards of 200,000 people and displaced more than one million, a wide range of voices have emerged seeking to explain how a catastrophe of this order could have happened and how Haiti might move forward. From Mark Danner’s excellent account of American meddling in Haiti, to David Brooks’ deplorable column citing “progress-resistant cultural influences” as the tragedy’s principal cause, there has been no shortage of analysis.

Yet sadly we have heard very little from the people most affected by the devastation: Haitians themselves. In newspapers or journals like this one, few Haitian voices have emerged to weigh in on the crisis. More troubling, there seems to be very little consultation of ordinary Haitians as the rebuilding effort begins.

Subsidiarity teaches that those in the thick of a problem are the ones best equipped to develop solutions. It is a message that the international community doesn't seem to be hearing. As non-governmental organizations and foreign governments flood the country with desperately needed food, water and medical supplies, Haitian voices once again do not appear to be playing a role in helping to direct the aid where it needs to go. Residents of the southern Haitian city of Grand Goave told the Inter Press Service News Agency that there is “a network of seven neighborhood leaders for each section of the city that has not been tapped in the relief effort.” Aid workers are insisting that local leadership play a role. Dolores Rescheleit of the German NGO Arche Nova told IPS, “For us, it was very important to do this without military. Because the people in the camp are very strong. When you give the responsibility to the people in the camp, they will do it better than we will with the military."

“A committee of Haitians, with sub-committees to handle security, hygiene, and aid distribution, is governing the camp without problems,” Rescheleit added.

For decades non-governmental organizations, driven by international community aid dollars, have employed development paradigms largely devoid of the voice of the Haitian people. From the Creole pig debacle of the 1980s (scroll to minute 4:40 of Dr. Paul Farmer's account) to today’s discussion of how to house the newly homeless masses, Haitian perspectives appear absent. This is unfortunate, not just because it undermines the dignity of the Haitian people, but also because the wisdom of lived experience—a wisdom that has enabled Haitians to survive for decades in conditions that would surely kill most others, a wisdom that could help rebuild Haiti—is ignored. While the almost incalculable devastation requires an immediate response, in some cases the best of intentions can have serious long-term negative consequences for Haitians.

The story of one Haitian worker in Port-au-Prince illustrates this potential harm: Delande Jean-Michel is a technician at a private firm contracted by the Haitian electric company to provide power for the capital. Jean-Michel was in the power plant when the quake struck and three of his fellow workers were pinned beneath debris. Despite the efforts of Jean-Michel and his co-workers to free those trapped, the men died.

Since the quake the plant remains off-line while technicians from three foreign-based companies evaluate the damage and make repairs. The foreign technicians, engineers and specialists are working without accompaniment by Haitian employees, who remain idle.

In a phone interview, Jean-Michel expressed the anxiety of his fellow Haitians who had jobs at the plant before the quake, but now fear they may be in jeopardy. “In this phase, they don’t need Haitians,” Jean-Michel said he was told. “There’s a 50 percent chance I’ll get my job back,” Jean-Michel said, expressing concern that American companies and government institutions would, over time, effectively take over the country.

“There are many things that Haitians can do,” Jean-Michel said. "If they’re [foreign technicians] doing that work, they should have Haitians by their side. And it would create work.”

When Haitian voices are included in development efforts what emerges is a sustainable way forward, one that empowers local people. Supported by the dollars that the relief effort brings, Haitians can help shape a locally based aid model that seeks to empower ordinary Haitians. Many Haitians are keenly aware of this, and some, like Wilson Cadet, are willing to speak up about it.

Nearly four years ago I traveled to the rural village of Ma Wouj with a group from St. Thomas University in Florida. Upon arriving, Cadet, a lawyer and president of the local chapter of Caritas, introduced us to the members of the local parish. Then Cadet matter-of-factly laid down the ground rules that would guide our work: "If you have come to work with us, to learn from our experiences, our insights and our discernment of the priorities for our town, then welcome. If, however, you have come to tell us what you will do for us, then, thank you for your visit, but, we must respectfully tell you that we are not interested."

In great detail Cadet described past international aid and development programs foisted upon the people of Ma Wouj that had no bearing on their lives: water purification projects that weren’t sustainable; agronomists from non-governmental organizations sent to help, but who refused to survey the area's farms; agricultural enhancement methods that weren’t compatible with Ma Wouj's terrain; health initiatives that were compromised by culturally inappropriate implementation.

Meanwhile, Cadet and his fellow Caritas volunteers, drawing on their in-depth local knowledge and with little more than 50-cent pens and note pads, have organized assessment teams to identify and prioritize local development needs based on the real-world data they collect—before they propose any solutions. In the wake of the earthquake, the Caritas group is resettling 3,200 internally displaced Haitians from Port-au-Prince, playing a critical role in the relief efforts. A Jan. 22 United Nations Situation Report “estimates that the number of people leaving cities for rural areas could reach one million, putting pressure on already vulnerable communities.” At the same time that they are welcoming evacuees, the Caritas chapter in Ma Wouj is also dispatching volunteers to gather quake damage reports in their area. Yet despite the group’s impressive track record, to date no NGO has sought to tap its collective knowledge and experience, according to the Rev. Giuseppe Noli, pastor of the Ma Wouj parish that is home to the Caritas group.

One lesson that Caritas has learned is that immediate relief must be paired with long-term development programs. For example, Cadet and his colleagues support a regional coffee cooperative, Cocano, which in the last two years exported more than 39,000 pounds of coffee, bringing stable income to a region where many live on less than $1 per day. In the wake of an influx of people from Port-au-Prince, the continued development of entities like Cocano will be all the more critical. Anthony Vinciguerra, director of the Center for Justice and Peace at St. Thomas University, a collaborative partner of Cocano, noted another crucial benefit: “Equally important is the day-to-day work of the cooperative—members' meetings, decision-making, record keeping, shipping, paying taxes, negotiating with the local government, etc.—tasks that help strengthen civil society infrastructure essential in a functioning economy.” Benefits such as these appear largely absent from relief efforts implemented by the U.S. and other foreign governments.

Without an approach to relief and reconstruction that includes Haitian voices, the international community may meet the immediate need at hand, but the creation of a stable, self-sufficient Haiti will likely remain elusive. No one assumes it will be easy to rebuild Haiti, but by standing alongside Haitians, learning from their knowledge and supporting their efforts, the international community could employ a pragmatic approach to the use of development funds—one that also embodies the best of Catholic Social teaching on subsidiarity and solidarity. Haiti’s future will not be an easy path, but it must be a Haitian-made path, one that we can only join them on together.

Brian J. Stevens is a former reporter with the Haitian Times newspaper.  He is the Midwest field representative for the Catholic Campaign for Human Development at the U.S. Conference of Catholic Bishops.

I know that it will never happen, but I would love to see Jean Bertrand Aristide allowed to return to Haiti.  The vast majority of Haitians (the poor ones) still love him, and Aristide obviously loves Haiti.  He says that he does not wish to enter politics, but rather to teach.  His book, "Eyes of the Heart; Seeking a Path for the Poor in and Age of Globalization", shows much insight into the ways that free-trade don't work in Haiti.  I am intrigued by his ideas for establishing "decent poverty" in Haiti.  Of course, his critics will call that socialism.

STAN FITZGERALD MR/MRS
11 years 3 months ago
Brian Stevens' article reminded me that for all of our desires to be the world leader, the one who comes to the rescue when others are in trouble, we are still a "colonial power." We always know what's best for you, whoever you are! I loved the story of Wilson Cadet and his variation on the Aborigine's Women's prayer. I wish I had been more discriminating and put some caveats on the donations I made to help the Haitian people. Thank you for reminding us about the real world.