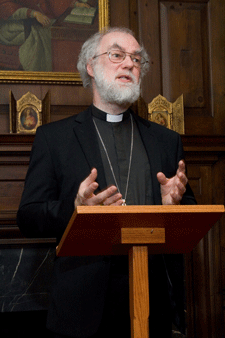 Your Excellency, Your Grace, Reverend Fathers, brothers and sisters: to be here today is for me an enormous delight and a quite unexpected honor; and my first task is simply to say, from my heart, a very warmest thank you to America magazine, to the Jesuits, to you who have welcomed me here today. Thank you for this act of ecumenical generosity and fellowship.

You’ve already heard the words “martyrial ecumenism,” and what they express is, to me, something utterly essential about the life of the Christian Church. From the moment when St. Paul recognized in Jesus the face of his victims, it has been a deep dimension of Christian holiness: to be able to go to one’s brothers and sisters in repentance and receive from those whom we have offended or excluded the grace of God’s welcome. When our churches learn to celebrate fully and gladly each other’s martyrs—as they have begun to do—then that moment of Paul’s conversion comes alive again. And since today is indeed the Feast of the Conversion of St Paul, little could be more appropriate than that meditation for our thoughts.

Some years ago I was visiting Uganda and was taken to the impressive church that marks the site of the deaths of the first Roman Catholic martyrs in Uganda in the nineteenth century—the altar there standing on the very spot where one of them was burnt to death. I visited there as an Anglican pilgrim but, rashly, wearing my clerical dress. And when a large number of African schoolchildren flocked in to the church there, the priest, who was showing me around, turned to me casually and said, “I’m sure you’d like to say a few words to the children” (words which many clergy have learned to dread!) But for me it was a moment of martyrial ecumenism. It was a gift to be able, in that unforgettable place, to celebrate the martyrs of a sister church, knowing that the crucified Christ for whom they died was not the possession of any one institution or community, but the possession of God the Father and shared with the world.

Edmund Campion has a very particular role in my own interests, since I have long been fascinated by the theory that William Shakespeare, as a young man, spent a few months in the household of a Roman Catholic aristocrat in Lancashire, which was visited at exactly the same time by Edmund Campion, between 1580 and 1581. We know that Campion was traveling in Lancashire and spent some time at Houghton Hall. And we know that among the servants at Houghton Hall at that time was a man named William Shakeshafte. Twentieth-century scholars developed the theory that the young Shakespeare had been shipped off north to learn the trade of school-mastering at a time when his presence in the Midlands was embarrassing for various reasons. I don’t know whether this is true or not, and of course the great thing is that none of us ever will. (It’s one of the wonderful things about academic theories, as many of you in this room will be well aware.) But I have more than once reflected on the conversations that might have taken place between the young Shakespeare and the middle-aged Jesuit on his way to martyrdom.

Shakespeare was somebody who constantly wanted to affirm to the world that there was more in humanity than anyone might have suspected. “Is man no more than this?” asks King Lear.  Shakespeare’s imaginative vision is in effect a protracted “no” to that question. Humanity is never just this or that. Humanity has possibilities, lured and shaped by grace, which are endless, fathomless, mysterious and terrible—for good and evil. The one thing we can never say about humanity is that now we know all we need to.

I like to think that the priest on his way to martyrdom may very well have sown a seed there.  Martyrdom is excessive, extravagant and foolish. Martyrdom is an affirmation of profound witness about the depths of human possibility in the face of what can in some circumstances seem like fathomless evil. Martyrdom affirms that there is something worth dying for, and it is the grace, the love, the infinite compassion of God. If Shakespeare was a Roman Catholic, he was almost certainly a very bad Roman Catholic. And indeed if he was an Anglican, he was almost certainly a very bad Anglican, too! Like many people in that era he was, I am sure, at best confused in his religious allegiances. But something of that radical, catholic, orthodox, reformed vision—of the fathomlessness of grace finally proving itself deeper than the depth of human rebellion and evil—pervades his plays, more and more indeed as he grows older. It’s in one of his last plays that you hear that extraordinary Christian clarion call, “Pardon’s the word to all.” And that takes us right back to martyrial ecumenism. Martyrdom is one form of Christian “excess,” one affirmation of the dignity and glory, the apocalypse of glory, which can be uncovered in the human face. But so is forgiveness. A functional, reductive account of human relationships is never able to cope with forgiveness, radical grace, the new creation that is God’s restoration of sin and failure.

And so, if the answer to the question, “is man is man no more than this?” (forgive the sexist language of the era) is “no, humanity is more than that,”, then the capacity for martyrdom is simply one aspect of that immense capacity for self-giving, of which forgiveness itself is the form available to each and every one of us: that vast range of capacity for self-giving, which is the image of God in us. And when we as Christian believers try to engage with the society around us, with the culture, the politics, the economics of our age, what we seek to do is not simply to lay before that culture a set of propositions about God. It is to uncover before that culture the depths of human possibility: to say that humanity is more than this, this and this; to say that self-giving in death and sacrifice is possible for human beings; to say that forgiveness and reconciliation are possible for human beings.

A few months ago I was visiting Japan, and in preparation for that visit I read some of what the late Father Pedro Arrupe had written about his experiences in Japan at the time of the dropping of the bombs in 1945. And as I read, I began to understand more and more deeply how someone formed in the Jesuit tradition that was Campion’s could see into the heart, into the depths of evil, and yet see beyond. In the face of unspeakable inhumanities, Pedro Arrupe was able to witness to the humanism, the depth of hope, which is the proper contribution of Christians to culture and politics and ecumenism.

I believe the first recipient of this award was Jacques Maritain. Maritain, whom again I count as a great intellectual and spiritual influence, wrote a well-known book under the title of Integral Humanism, and that does seem to be finally what we are reflecting about today. Humanism that is integral because it refuses to ignore the depths of possibility in humanity, for evil and for good.  A humanism that is integral as it sees the capacity for human beings to be integrated, drawn together in themselves by that fathomless love and forgiveness of God.

And so, in very gratefully and humbly accepting this generous award, I would want to join with you all in celebrating the fact that “pardon’s the word to all,” the fact that man and woman is more than this or that, and the fact that in our hearts God has placed his image, which means the capacity for reconciliation and the capacity for utter and radical gift. That gift, that compassion, that readiness for risk, we love and acknowledge and celebrate in saints like Edmund Campion.  We celebrate it too in geniuses like William Shakespeare, or Shakeshafte. We celebrate it in the lives of people we have all been privileged to know, many of the brethren of the Society [of Jesus] in our own age of course who have given their lives in various ways for this vision. And I end simply by expressing my abiding and daily hope and prayer that we may find more and more ways—through “martyrial ecumenism” and other kinds of fellowship—to draw together in celebrating God’s gift and God’s purpose as we celebrate God’s saints. Thank you all.

Rowan Williams is the archbishop of Canterbury and the author of more than a score of books, including Dostoevsky: Language, Faith and Fiction.

What a beautiful and powerful meditation on martyrial ecumenism.