Reality Bites: Jersey Shore and Keeping Up with the Kardashians 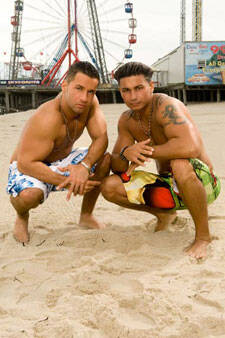 Gym. Tan. Laundry. These are the marching orders for the denizens of the “Jersey Shore,” the slice of distorted Americana that has become the latest darling of reality television.  All bloated muscles, tan flesh and silicone, the casts of “Jersey Shore” and its celebrity cousin “Keeping up with the Kardashians” on E! serve as a reminder that the circus sideshow is alive and well, and blaring away in our living rooms.

It’s been nearly 20 years since MTV introduced reality television to an unsuspecting public. “The Real World,” which debuted in 1992, followed the exploits of a diverse group of twenty-somethings, living under the same roof and trying to negotiate the ups and downs of newly found adulthood. The show, though flawed, had promise. Taking advantage of the diversity of its cast, “The Real World” was able to examine such issues as racism, abortion and HIV/AIDS; indeed, one of the members of the show’s third season cast, Pedro Zamora, was HIV positive, and a significant portion of the show dealt with how the small community of strangers coped with living in the midst of the deadly disease.

Most significant about the show was the audience to whom it was directed. MTV had been the flagship for youth culture for the better part of a decade by the time the first episode of “The Real World” aired, and, coming on the heels of its wildly successful “Rock the Vote” campaign, there seemed to be a deliberate movement by the network toward responsible, socially relevant broadcasting for the 18-25 demographic.

It was fun while it lasted.

Twenty years later, the same MTV, both older and less influential, has brought us “Jersey Shore,” another look at a group of twenty-something strangers living under the same roof. This time, however, all of the cast members are from similar backgrounds (middle class, Mid-Atlantic, Italian American) and aren’t so much dealing with the reality of living amid an economic crisis and crippling unemployment as running from it. Directly to the next bar and the next one night stand.

The narrative structure of each episode is straightforward. After said gym, tan and laundry are completed (always off camera) copious drinking ensues, followed by an excursion to a local nightclub, culminating in some act of violence by or toward one of the cast members, which inevitably requires police intervention.  Of course, sometimes there is sex, usually anonymous, always editorialized about straight into the camera.

At first glance “Keeping up with the Kardashians” seems a bit higher brow than “Jersey Shore.” Its cast is not moved into a controlled situation, away from friends, family and career. Rather, they live in their own environment and go about their daily lives. That’s where the problems begin. The main protagonists are the Kardashian sisters: Kourtney, Kim and Khloe, self-titled “celebutantes” a term that apparently has something to do with leaking sex tapes for profit and getting DUIs.

The Kardashian sisters live in the world of the entitled confines of suburban Los Angeles and move from one staged scenario to the next. This is the problem when trying to base a television show around the vacuous: story ideas dry up quickly and you wind up with one of two options. That is, supply them with liquor until violence ensues (a la the folks at “Jersey Shore”) or use stolen plots from old episodes of “I Love Lucy.” The producers of “Kardashian” chose the latter.

Somewhere between the debutante season of “The Real World” and the advent of “Jersey Shore,” reality television became unreal. While the form lends itself to an element of the contrived, there is also the potential for interesting, thought-provoking television. It is in this notion of the “real,” the true, the authentic, where the potential for life-changing television lies. Pedro Zamora’s story was gripping because he was not an actor playing someone with HIV. Pedro did not get to leave the set at the end of the day and go home to his normal, healthy life. HIV was his reality. His story was powerful because it was real and it was true and we as audience members couldn’t console ourselves with the fact that it was ultimately a fiction. “The Real Word” didn’t let us off the hook.

Reality television’s opportunity to bring forth a new level of socially relevant viewing was cast aside long ago and in its wake stands a never-ending throng of people flinging themselves into altered bodies, faces and states of consciousness via surgery, tanning, steroids, alcohol, drugs and celebrity.  Gym. Tan. Laundry, indeed.