The Americans: A new exhibit of paintings tells the story of a young nation 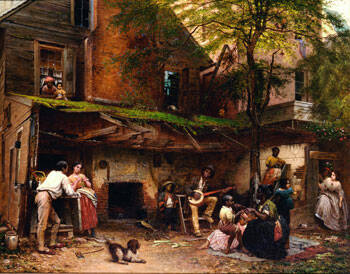 What’s not to admire about a blockbuster exhibition of American narrative paintings that includes acknowledged masterpieces by the likes of John Singleton Copley, Charles Willson Peale, Winslow Homer, Thomas Eakins, John Singer Sargent, Mary Cassatt, George Bellows and Frederick Remington? This exhibit, now at the Metropolitan Museum of Art in New York through Jan. 24, 2010 and moving on to the Los Angeles County Museum of Art (Feb. 28- May 23, 2010), contains 106 genre paintings.

The almost sociological conceit of the show is to find, in this survey of American art focused mainly on everyday life, clues to shifts in American self-understanding about class, domesticity, gender, race and industrial relations. (Landscape is generally missing from the exhibit, so there is none of the Hudson River School painters like Thomas Cole or Albert Bierstadt.)

Various canvases portray courting couples, awkward new immigrants, blacks and whites, separate and together (and, in one canvas, confronting European immigrants who would compete with freed blacks for labor), gun-toting cowboys and politics in small towns. They embody some typical stereotypes, such as the “Yankee,” the “backwoodsman,” the “Negro” and the factory worker. They limn shifting roles for women and working-class immigrants and the tensions between rural and urban America. In a sense, the show exhibits some of the anxieties and utopian hopes for the new land: racial divisions, the pull between individual and community, trends toward urbanization, new roles for women, the presence of the land itself as a vast, often threatening, wilderness; as well as the more universal theme of opportunity.

The exhibition is divided into two thematic galleries and four sections devoted to a chronological look at American genre painting as it illustrates shifting sensibilities. One of the thematic galleries focuses on portraiture. It shows the difficulties the earliest American painters faced in gaining a livelihood for anything beyond painting portraits. Both John Singleton Copley and Benjamin West, ultimately, went to England to pursue their careers. In later periods, painters had to compete with the rise of mass newspapers and popular engravings. Only toward the middle to late 19th century did indigenous American art shows or museums began to proliferate—and even then John Singer Sargent, Mary Cassatt and James Whistler largely pursued their careers in Europe.

The second thematic gallery looks at “men out on water,” dilating on the theme of the vast ocean that separated America from Europe. Two paintings in this gallery stand out: Copley’s “Watson and the Shark” and Winslow Homer’s classic study, “The Gulf Stream,” which pictures a lone desperate black man, adrift in a small wrecked boat surrounded by sharks.

The historic sections are divided into four periods: (1) “Inventing American Stories: 1765-1830”; (2) “Stories for the Public: 1830-1860”; (3) “Stories of War and Reconciliation: 1860-1877”; and (4) “Cosmopolitan and Candid Stories: 1877-1915.” This last includes four remarkable Mary Cassatt portraits of children or mothers and several canvases about industrial life. It takes us into the Ashcan school, which depicted the teaming life of New York City slums (including works by John Sloan) and the attempts to regain a new sense of masculinity, in the sense of Theodore Roosevelt’s ideal of a “strenuous life.” Eakins has two canvases in this section:  “Max Schmitt in a Single Scull” and “Between Rounds” (a boxing scene).

Among my favorite paintings were three canvases by George Caleb Bingham offering idyllic pictures of the new West. “Fur Traders Descending the Missouri” suggests its quiet and vast wilderness. It signals an American theme of self-reliant autonomy. “The County Election” celebrates a vibrant post-Jacksonian response to democratic possibilities. “The Jolly Boatmen,” showered with the warmth and ease of sunlight, captures an abundant West that allows for freedoms from the restraints of old Yankee haunts. Other highlights include Frederick Remington’s “Fight for the Water Hole,” which conjures, for present viewers, scenes reminiscent of a John Ford Western. William Sydney Mount’s “Bargaining for a Horse” gives a keen portrait of the shrewd Yankee. Eastman Johnson’s “Negro Life at the South” peaks into the world of a hidden sub-culture. A white woman emerges through a side entrance to find a group of blacks engaged in courting and playing music.

Winslow Homer’s “War Veteran in a New Field” contemplates a post-Civil War farmer returning to his field, weaving a scythe over richly growing wheat. The narrative seems to convey the ambiguities of war: the scythe as a symbol of death, the new field as a renewed opportunity. Is the gathering twilight in the picture an intimation of death? Or does its soft light and hard labor point, instead, to the nation’s now shared fate? George Bellows’ boxing canvas, “Club Night,” and his swarming cityscape of Manhattan’s Lower East Side, “Cliff Dwellers,” also raise ambiguities. Is this new urban, gritty world filled with vital energy and community or does it brutalize its inhabitants? In Thomas Anshutz’ “The Iron Workers’ Noontime,” muscular men emerge from their toil at forges and furnaces for a respite from their labor. Is it meant to signify the dignity or the brutal hardship of laboring conditions?

Recent cutbacks in museum budgets make it unlikely that an exhibit of this breadth and scope will be coming our way again soon. Its innovation lies in its special emphasis on genre painting and what it tells us about vagaries and shifts in American sensibilities. We forget, sometimes, that many American painters of the late 19th century frequently also worked as engravers for newspapers. This often overlooked vibrant strain of American narrative art carried into a later period, with artists such as Thomas Hart Benton, Edward Hopper, Reginald Marsh, Jacob Lawrence and the muralists who worked for the W.P.A. in the Great Depression. But after World War I, photography largely displaced engraved illustrations in magazines and newspapers. So artists then turned largely to the fresh adventure of abstraction.

John Coleman, S.J., is a sociologist and associate pastor at St. Ignatius Church in San Francisco.