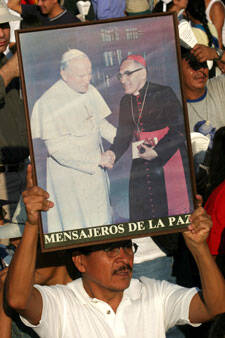 The Vatican journalist Andrea Torniello recently reported that the Congregation for the Causes of Saints had approved the first step toward the beatification of Pope John Paul II, having given the green light for a declaration of his “heroic virtue.” A proclamation will declare the pope venerable and begin the investigation for the miracle (a nun’s cure from Parkinson’s disease is already being considered) required for beatification. The speed with which the causes of John Paul II and Mother Teresa have moved through the congregation is not only a tribute to their personal sanctity but also a result of organized efforts on behalf of their canonization. But there are other causes predating those two that seem to be languishing.

Oscar Arnulfo Romero, the archbishop of San Salvador who was murdered during Mass by government forces because of his defense of the poor, clearly fulfills the definition of a martyr. Blessed John XXIII also seems to fit every requirement of sanctity—from humility and personal piety to a deep devotion to Christ and the church—yet his cause, too, seems stalled. (Then again, maybe the two need to do a better job interceding for a miracle.) More-over, the Vatican needs to recognize more lay saints, both single and married. The beatification of Louis and Zélie Martin, the parents of St. Thérèse of Lisieux, and of Pier Giorgio Frassati are good signs. We might suggest Jacques and Raïssa Maritain and Catherine Doherty, too. For there are as many holy mothers and fathers as there are holy Mothers and Fathers.

Travel restrictions imposed upon the dissident blogger Yoani Sánchez, who was forbidden to leave her native Cuba last year to receive a prestigious digital journalism award in Madrid, are a relatively mild form of the retaliation repressive governments can take against their critics. In nations with even weaker human rights protections, critical blogging about the established order can be far more perilous. According to the Committee to Protect Journalists, the most dangerous country for bloggers is Burma, which places severe restrictions on Internet activity. A popular blogger known as Zargana is serving a decades-long prison term as punishment for disseminating video footage of the response in that country to the disastrous Cyclone Nargis in 2008, when the military rulers’ resistance to accepting outside aid cost thousands of lives.

Iran ranks second. The government routinely harasses and even imprisons bloggers who comment negatively on religious and political figures. One blogger who “insulted” religious leaders died behind bars in unexplained circumstances. Powerful leaders in Saudi Arabia have gone so far as to call for flogging and death for online writers who post material considered heretical. China has the largest number of people online, almost 300 million, but authorities there also have the most comprehensive online censorship program. Some two dozen Chinese bloggers are currently serving prison terms.

Clearly freedom of speech cannot be taken for granted, particularly in countries the C.P.J. considers the worst offenders. But in an era of instant global communication, that same freedom is among the most cherished values. The world depends on dissident bloggers to expose human rights abuses that might otherwise remain unknown and unchallenged.

Art That Frees or Enslaves

“An essential function of genuine beauty is that it gives man a healthy ‘shock.’” Pope Benedict XVI offered this observation in his address to over 250 international artists in the Sistine Chapel on Nov. 21. The Vatican, through Archbishop Gianfranco Ravisi, president of the Pontifical Council for Culture, invited several hundred artists to meet with the pope. Precedents for this meeting with artists were the similar meeting in May 1964 of Pope Paul VI with artists and the “Letter to Artists” of Pope John Paul II in 1999. Among those in attendance were writers, artists, singers, sculptors, actors, film directors, composers and architects.

Art’s shock, according to the pope, can move a person in a positive or a negative direction. Positively, the beauty of art “draws him out of himself, from being content with the humdrum, ‘reawakens’ him, opening the eyes of his heart and mind, giving him wings, carrying him aloft.” Yet he cautioned that the wrong kind of beauty “thrust upon us [by art] is illusory and deceitful, superficial and blinding, leaving the onlooker dazed; instead of bringing him out of himself, it imprisons him within himself and further enslaves him, depriving him of hope and joy.”

In his address, given shortly before the beginning of Advent, Pope Benedict linked art and beauty with the mysteries of Advent and Christmas. He quoted Simone Weil saying that “beauty is the experimental proof that incarnation is possible.” Indeed, the pope suggests that a very positive way to begin the annual journey of the church year is to walk the path of beauty, the via pulchritudinis. Beauty becomes a “path toward the transcendent, toward the ultimate Mystery, toward God.” [See our editors’ Advent reflections on art at www.americamagazine.org/video.]

The Editors
Show Comments (
1
)
Comments are automatically closed two weeks after an article's initial publication. See our comments policy for more.
12 years 11 months ago
To the Editors:

It was with great concern that I read that the Congregation for the Causes of Saints had approved the first step toward the beatification of Pope John Paul II.

This process should be suspended until there has been a full
explanation of why the Pope ignored the credible
claims of the victims that Father Marcial Maciel Degollado was a sexual predator, and instead lavished praise and privileges upon him.

We do not need to make this scandal worse.