Monastic Analysis: Looking at the recession through the eyes of Trappists 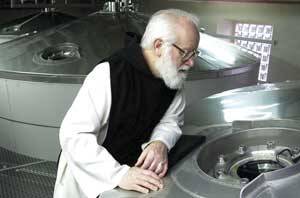 At 2:15 every morning in the dark, silent fields of western New York, small reading lights come on one by one in the chapel stalls of the Abbey of the Genesee. As they have done for most of their adult lives, some 30 Trappist monks are making ready to pray for a world that is still asleep. But this year, something is different. This year that sleep is fitful.

“The bulletin board is filling up with prayer requests for employment,” says Brother Paul, who has lived within the monastic enclosure for 23 of his 50 years. “You read them, and you can tell that people are fearful that they’ll lose their jobs. Some have already lost them, and some are asking for our intercession because they’re going on a job interview.”

Unemployed men and women are knocking on the doors of the monastery looking for work in the bakery that financially supports the community. And the soup kitchens in nearby Rochester, N.Y., which are busier now than anyone can remember, eagerly await the weekly run of the monastery bread truck. Currently it makes 30 stops, delivering thousands of loaves of Monks’ Bread gratis. As the recession bears down, monks who have voluntarily separated themselves from the world are increasingly aware that they are part of the communities for whom they have been praying all these years.

Yet the monks’ own livelihood is not immune to the recession either. “Our bread sales are down $3,000 to $4,000 a week,” says Kevin Baker, who manages the abbey’s finances. That figure represents a 7 percent drop from last year. Basics like white and whole wheat bread have fallen even further, 14 percent, as supermarket customers switch from $1.99 Monk’s Bread loaves to 99-cent, store-brand specials. “People e-mail us saying, ‘You know, I just can’t afford the $1.99 loaf with that 99-cent special staring at me from the shelf,’” Brother Paul adds.

The recession is, literally, coming to the monastery’s doorstep. Bookings at its three retreat houses are way up as people seek solitude in order to make sense of the recession’s effects on their lives. The retreat houses are booked solid on weekends and, in an unprecedented development, are filling up on weeknights, too.

This all suggests questions: When the realities of the recession bridge the walls of the monastery, how do monks cope? More important, how can monastic insights help the rest of us deal with the psychological and spiritual toll of an economy that has lost its footing?

“I think monks deal with the same pressures and anxieties as everyone else,” says Brother Isaac, one of the youngest monks at the abbey. “In Matthew’s Gospel, Jesus tells us to consider the lilies of the field and not worry about what we’ll eat and drink. They’re gifts from God, and we know that, but the occupational hazard of living in the monastery is that you can take these things for granted. One monk does the laundry, another does the cooking and you don’t have to worry about it. We have a community to fall back on. Not everyone else does.”

That may not be such a bad thing, according to Dom John Eudes Bamberger, who is both a psychiatrist and a monk. “If people are just looking to get past the recession, they are missing an opportunity,” Dom Eudes explains. “Recession, as a human phenomenon, is analogous to other crises that test one’s lifestyle. But that lifestyle, for many Americans, was never real. We were living beyond our means. The recession is hurting people, no doubt. But what it’s really doing is threatening habits that developed in an unreal context.”

Dom Eudes sees the recession as a way to set things straight. “It’s a way to re-evaluate your values, not just to adapt to restricted means,” he says. “Are people re-evaluating their values now? My impression is that they are not. Maybe people who’ve lost their jobs are. The additional debt we’ve imposed on our children is not the answer. It’s a Band-Aid. Few people think in those terms, but we think that way.”

That is tough talk for people coming to the monastery for solace, not challenge, but Dom Eudes believes it is a message people need to hear—and to process. “Society values short-term goals. The monastic life takes the long view. The whole monastic life is conceived against the background of the end of the world. It’s eschatological. People feel as if they are losing now. But Jesus said that we must lose our life to save it. When you lose, what you have is an invitation to save your life. That’s the bottom line as far as I’m concerned.”

That is not to say, however, that monks are unconcerned with the material world. “If you’re truly living the monastic life, you are very concerned about material realities,” Brother Isaac says. “But not in a fretful, anxious, brooding way. St. Benedict talks about treating every material thing in the monastery as if it’s a sacred vessel.”

Not taking material things for granted requires effort, and in the run of economic good times leading up to the recession, few people stopped to appreciate what we have. Dom Eudes says that was a mistake, but one that can be corrected. How? One way is to meditate on the Acts of the Apostles and put its lessons into action. “In Acts, the original Christian community shared all they had,” he says. “That’s part of the monastic life. People should be mimicking that outside of the monastery now.”

Economic insecurity, however, often prompts people to do the opposite, and therein lies a major problem. “In times of economic crisis, there is a tendency to become preoccupied with my own security,” Brother Isaac explains. “People are thinking, What can I do to keep my little island of security? As monks, we counter that in our lives. Monks think eschatologically. We face a more radical, existential insecurity. We remind ourselves to put our faith in God alone.”

Brother Isaac admits that is easier to do in a monastery than in the work-a-day world, but he insists that it is doable. “It’s hard to tune out all those ads telling us what we should desire,” he says. “Many of those things won’t make somebody secure. Security, as a value, resides at a much deeper level: the understanding that everything that supports your being is a free gift from God. If you focus on God, you become less preoccupied with material realities.”

Dom Eudes advises people to use the recession to “get freer of values that are propagated by a sick society”—materialistic, short-term goals that make people unsettled, even anxious at the first thought that those goals might disappear.

“The recession is letting us approach the reality of the limits of this life,” Dom Eudes explains. “It’s causing pain because it’s disrupting people’s habitual way of living. But we have a philosophy that there should be pain in life. On other continents people are aware of that pain, but many of them are happy. We have to begin asking ourselves why.

“Recession is a disaster,” he continued, “if you think making this life as pleasant as possible is what it’s all about. I would tell the readers of America to stop and to look at life in light of their deepest values, not the values that assault them from television. This reckoning is where the values of the monastic life intersect with the world.”

Kevin Baker, who is both a family man and part of the monastic community, believes the media have made the recession worse. “From a psychological standpoint, the media have hyped the fear level to the point that people are anxious,” he says. “People are saving more, and that’s not a bad thing. But among the monks there is no fear. And that’s the real difference.”

Brother Paul wants people to come to the monastery and, he hopes, drop those fears beside the tabernacle. He knows that is not easy, but he also knows it can be done. “My father had a gas station when I was growing up,” he says. “And I never thought of what would happen if my dad lost his job and his gas station went out of business. Now, those fears are real for people. I’d tell them to take things one day at a time and to know that the horizon is always eternity. And to come here and rest—and have some bread. We’ve got lots of that.”

Matt Nannery, of Yaphank, N.Y., has been a business reporter and editor for 20 years.

I bought a subscription to the Web version of AMERICA in order to read this article.  It was well worth it!  THank you.

Matt Nannery's article on seeing the recession through the eyes of the Trappists is approriately titled, I think. I doubt that he thought it would bring more subscriptions to America Magazine, but so much the bettter.

I don't look at the recession through the eyes of the Trappists even though their insights and values may touch a deep core in the hearts of many and give them courage to cope with the stresses and strains flowing from the recession. I look at the recession through the eyes of a father and grandfather who remembers his working days when he was responsible for providing food, shelter, clothing, medical care, and education for his wife and children, all the while knowing the uncertainty of his own life and a paycheck. I would welcome another twelve years of that uncertainty for the twelve years that I lived in religious life, although the latter did not involve financial worries.

The eschatalogical focus of the Trappists testifies to a strong christian belief that this life is not all of life, but it is in this life where we find God and experience his love, sometimes in the midst of heart wrenching pain not typically exprienced by the Trappists.

Monastery walls are not necessary to defend us against the promise of pleasure inherent in advertising. There is always the remote and the mute button.