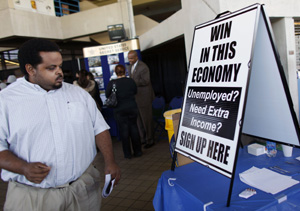 Rising unemployment and the stalled creation of new jobs are dampening morale on Main Street and threatening the nation’s economic recovery. More than 15 million Americans who want to work are now out of a job, nearly one in 10. According to the Department of Labor, the number of job seekers is six times the number of job openings, a situation much more dire than during the 2001 recession, when this ratio was two to one.

Two proposals now being debated in Congress would address these twin problems, and both proposals ought to be passed quickly. One bill already passed in the House would extend by 13 weeks the unemployment insurance payments scheduled to run out at year’s end, but only in states where unemployment is 8.5 percent or higher. A similar bill in the Senate (that would extend four weeks of payments to all Americans receiving unemployment and 12 weeks where the rate is 8.5 or higher) has stalled while lawmakers debate how to finance it. Either extension could assist more than a million jobless people whose benefits are expiring.

The second proposal would offer tax credits to businesses that either create new jobs or extend existing jobs from part time to full time. Substantial tax credits like this could help small businesses, which for the last 15 years have created some 80 percent of the nation’s new jobs. Quick passage of such a bill would overcome another possible hurdle: that businesses might postpone hiring now, when new jobs are critically needed, and instead wait for a future credit to emerge from Congress.

Much more must be done. During this recession, the country’s job market has contracted by nearly 6 percent. A higher percentage of jobs have been lost this year than in any year since 1939. Nor does the double-digit unemployment rate projected for next year tell the whole story, for it excludes persons working part time who would prefer a full-time job and those who have stopped looking for work. Job creation lags behind the early signs of a recovery because businesses must stabilize their operations before launching new rounds of job-generating investment.

Speedy action is critical. This year more than five million Americans have been out of work for six months or longer. Many have used up their savings, are living on credit and can no longer afford health insurance. Prolonged joblessness is pernicious. It not only increases credit card defaults and home foreclosures but also forces millions of children to grow up in poverty and weakens family ties as a consequence of alcoholism, addiction and domestic violence.

What else can be done without increasing the deficit? Some ideas: The federal government should immediately ratchet up pressure on banks, particularly those that accepted TARP monies, to extend more commercial credit to credit-worthy small businesses. Then it should work with Congress to pass new legislation (like the Glass-Steagall Act of 1933) that would restrict commercial banks to making loans and trading securities only for their customers. The goal is to make legal the distinction between investment banks and commercial banks and break up the giant holding companies.

The government should follow the infrastructure and environmental start-up monies it distributed to states with the stimulus and urge them to use more of this money for job creation during 2010. Lawmakers had expected such job creation to take time because these projects (bridges, roads, public transportation, alternative energy systems) are large and complex. But nearly a year has passed, and more projects—selected for their shovel-readiness—should move toward hiring.

Lawmakers should also direct the labor force in ways that will lead to long-term gains. That includes allocating money to states for job creation and job preparation. Community colleges, for example, are currently bulging with students—those who cannot find jobs, laid-off workers seeking new skills and returning veterans. Each of these categories includes thousands of people eager for the opportunities that increased stimulus funding would provide. Programs that teach English as a second language or prepare students for high school equivalency diplomas will also prepare workers who might otherwise be unable to compete when jobs return. Regarding health care, governments should find incentives now to increase the number of graduates in nursing, primary care medicine and gerontology, areas of medicine with critical shortages.

With recent projections showing that a full recovery may be several years away, the current job picture is discouraging. It will be costly to turn around, but delay or half-measures now will only prolong the pain. Better to employ all the tools at our disposal—monetary and fiscal policy, political leadership and ingenuity—to match the seriousness of the current unemployment crisis.