Irreplaceable Dialogue: Why Christians and Jews must continue the conversation 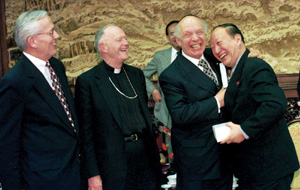 Our world is filled with dialogue. The word itself is used and misused in multiple ways. Its range stretches from the highly orchestrated dialogue of international affairs to informal conversations between husbands and wives. Indeed, on the highest level of all is our dialogue with God in prayer and in meditation. Somewhere, between dialogue on the level of the world political scene and the personal reflections of a married couple, we find a genre called interreligious dialogue, which has become more and more important in the cultural context of our times.

Many of us have been part of interreligious dialogue. Clergy and laity of almost every faith community have engaged in it, sometimes with unexpected success, as clarity and charity put an end to old misunderstandings. Bishops like me have had the opportunity to engage in ecumenical and interreligious dialogue with many Christian churches and ecclesial communities, as well as with leaders of other religious bodies, but perhaps the most important of these is the dialogue that takes place with ever greater frequency with members of the Jewish faith. I have seen the desire for such conversations reflected in the goodness of people on both sides and in their desire to move from the problems of the past to a greater understanding of one family under God in the years ahead.

Besides almost innumerable contacts with Jewish communities in our own country, I have been privileged to participate in dialogue with Jewish religious leaders in Israel, in Eastern Europe and even in China. I once had this described to me as the unavoidable dialogue, and I believe this is true for several reasons.

First, we share an essential sacred book, the Bible, the compilation of those remarkable books of divine revelation that begin with the Torah, which we acknowledge as the Hebrew Scriptures. Even though Christians revere the Gospels and the epistles as part of our doctrinal foundation, and even though together with the sacred books of the Bible, our Jewish brothers and sisters are guided by the commentaries in the Talmud, the Mishnah and the Gemarah, yet the sacred books of the history of the people of Israel have always formed the foundation of our mutual heritage. The Bible is prayed in Christian churches as well as in synagogues throughout the world. It is read and meditated on and commented on, analyzed and discussed by both families of faith. Its books are plumbed for their wonderful insights, their beautiful expressions of adoration and petition; they make, indeed, a wonderful foundation for a dialogue that naturally emerges from conversations concerning them.

Second, we share a sacred history. For most of our histories we have been spiritually one. Christianity came upon the scene less than 2,000 years ago, but the history of the people of Israel, the chosen people of God—a history Christians share and without which we would be aimless and empty—goes back even to Ur of the Chaldees and, in a special way, to the man we Christians refer to as Abraham, our father in faith. Indeed, in that most essential part of Christian history, the years of the first century after the birth of Christ, we speak of men and women who belong to the family of Abraham in the physical sense of flesh and blood. Not only Jesus, his mother and his family, but all his apostles and disciples in those early moments were Jewish. So it is impossible to separate our histories, especially at that moment when for Christians all things began anew.

Third, we share almost indescribable sorrows. The early centuries of the Christian era saw those who followed Christ persecuted brutally by the Romans and by others throughout the known world. The very earliest days of Christianity found that even in the Jewish communities brother turned against brother and family against family as some accepted the Gospel teachings and others found their fidelity in a faithful adhesion to the covenant of Israel.

Throughout their history, the people of Israel suffered hardships and persecutions in the times of the judges, in the times of the kings and, we must admit with great sorrow, in the times of the Christians as well. The pogroms, which are so dark a blot on the history of Christianity— in which our brothers and sisters of the first covenant were persecuted, often killed, and driven from one place to another—are signs of the sorrow that faced the people of Israel in the Middle Ages and indeed up to the Shoah itself. The indescribable sorrow of the Shoah, the attempt to eliminate and eradicate the Jewish people from the face of the earth, which left millions and millions dead and other millions traumatized both in body and spirit by the inhumanity of their neighbors, many of whom called themselves Christian, is a moment of great sorrow for us all. In the times of Communism and Fascism, many Christians also felt the lash of persecution and, as is the case of our brothers and sisters of Israel, often because of their faith and trust in the living God. And so it is the sharing of indescribable sorrows that calls us to dialogue and common prayer to the one God above.

On the other hand, in the midst of the suffering, we both share indestructible confidence. My fourth point is that both our traditions affirm God’s fidelity to the covenant made long ago with Abraham, a covenant that has been renewed many times in sacred history. The people of Israel continue to hold powerfully to that glorious heritage, and we Catholics believe that they continue to live within the truth of the covenant made through Abraham and that God continues to be faithful to them. Indeed, as the Second Vatican Council teaches, “This people remains most dear to God, for God does not repent of the gifts he makes nor of the calls he issues.”

For our part, Christians have confidence in a living faith that the Lord Jesus will be with us until the end of time and that his church, founded on St. Peter, will endure until he comes again. It is such strong and unshakable confidence, characteristic of us both, that calls us to dialogue and to mutual appreciation.

A fifth point is that we share a tradition of saints and holy people. The prophets and the judges, the holy men and women of Israel, are holy men and women of our family, too. We will never forget their history and never cease to be touched by their courage and their wisdom. As we read the sacred books of the Hebrew Scriptures, we continue to be inspired by their example and urged to imitate their deeds. In the times after the coming of Christ, we Christians rejoice in so many martyrs and saints, even until our own time. We acknowledge as well the many multitudes of saintly and heroic Jews whose deep faith and whose devotion to the Law of Moses is nothing less than a manifestation of great personal holiness and love of God and neighbor. Our tradition also has given rise to enormous acts of charity and generosity as we have watched in awe the magnificent sharing of wealth among our Jewish brothers and sisters. I hope we have learned to mirror it in the almsgiving that is part of the Christian life.

Sixth, we share many common values. The Ten Commandments are the basis of the teachings on morality of both our families. The Golden Rule is a standard for Christian and Jew alike and has been for 20 centuries. The love of God and love of neighbor, which is taught in the Hebrew Scriptures and again so powerfully in the Gospel and the writings of the Apostles, has called our peoples to make sacrifices of love for the neighbor, far and near, often without any consideration for faith or nationality, but just because we understand the common human dignity of every human being as a creature of a loving God and as one who has received this gift of life from the very hands of the Creator.

Finally, we share the same world. We share the same communities. We shop at the same stores, often go to the same schools, read the same newspapers and strive to exercise the virtues of patriotism and loyalty for the countries in which we live. We share this world intimately, and this intimate sharing is most noted in the lands where our forefathers lived and still live today, in the Middle East, in the Holy Land in a special way and in the crowded cities of the Western world as well. We cannot share this rapidly shrinking earth without feeling a need to talk to one another, since our lives are so entwined in all these points I have listed and in the common love of neighbor to which both our faiths are so dramatically and perpetually called.

There are many other ways in which we find reasons for this unavoidable dialogue. Iwill end with a comment on the word “unavoidable.” This dialogue is not just unavoidable but most useful, important and necessary. It is not that we are forced to talk to each other but that by the very nature of our existence we are called to share so many points of light and of life that our dialogue is not only unavoidable but irreplaceable.

I thank God that in so many areas the dialogue has become a wonderful success. This is true in the United States, where a group of religious leaders, all from the family of Abraham, work together in harmony for the peace of Jerusalem.

Finally, I hope that we might see in this a call for another important dialogue, and that is the dialogue with the family of Islam. They, too, are children of Abraham and they, too, accept the oneness of the God who loves us. With them we too must learn to share and work together here, in this shrinking world, as we are all called to make it a place of peace and harmony where we will realize that we are all brothers and sisters in God’s one human family.