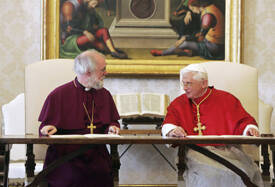 The move announced by Cardinal William Levada, prefect of the Congregation for the Doctrine of the Faith, on Oct. 20 caught everyone by surprise. The C.D.F. has dramatically streamlined the canonical procedures for full reception of whole Anglican parishes and dioceses into the Catholic Church. But even with plans for “personal ordinariates,” for the retention of what the cardinal called the Anglican “liturgical patrimony” and for the reception of married priests, questions remain. We might consider a few that pertain to the United States.

To begin with, what is the canonical status of a personal ordinariate? Will its bishop be a full member of an episcopal conference, like the U.S. Conference of Catholic Bishops? Likewise, what will be the place of married priests within the church? It is easy to imagine a young Catholic man who wishes to marry and be ordained simply entering an Anglican seminary. Other questions concern the reception of individual Anglicans. For over two decades, the Rite of Christian Initiation of Adults has been the mandated way in the United States to prepare members of other Christian communities for reception into the full communion of the Catholic Church. But with the wholesale admission of dioceses and parishes, will the “new Catholics” know much about their new faith? If not, will confusion be sown among the faithful?

Finally, is this a political move? If not, then why has the Vatican lowered the canonical bar for entrance for another traditionalist group (as with the Society of St. Pius X) while at the same time raising more hurdles for progressives (as with women religious in this country) who have spent their entire lives working for the Catholic Church and have accepted Vatican discipline on controverted matters? The Vatican also needs to avoid conveying the impression that we are opportunistically welcoming Anglicans simply because some of them oppose women priests and openly gay clergy. We hope answers will be found in the forthcoming apostolic constitution.

Morality in the Marketplace

Where did all that TARP money go? Some of it was well spent, fending off, as most economists now agree, a wholesale collapse of the U.S. economy. Without the bailout money given to some of the largest banks, credit would have been even more difficult to extend to companies and individuals, consumer confidence would have plummeted further, and the country could have seen a feared “run on the banks.” So part of TARP made sense.

But not all of TARP made sense. Thanks to the safety net provided by public funding, some of the profits resulting from TARP are being used to line the pockets of the chief executive officers of those same banks, which are now reporting profits and planning for bonus payments. Goldman Sachs, for example, set aside $16.7 billion dollars for bonuses for 2009. During a panel discussion in London recently, Lord Brian Griffiths, a Goldman executive, explained, apparently with a straight face, why bonuses are necessary: “We have to tolerate the inequality as a way to achieve greater prosperity and opportunity for all.”

Even in the face of popular ire, the U.S. government may have little say over bank bonuses, despite the laudable efforts of Kenneth Feinberg, President Obama’s “compensation czar.” Most bank C.E.O.’s and top-level executives will probably not be cowed by the government. Apparently they are happy to “tolerate the inequality” for some time longer, even when their gains are the result of public funding and a large percentage of that public is still unemployed.

The Bosnian Serb leader Radovan Karadzic, whose trial was scheduled to begin in the Hague, Netherlands, on Oct. 26, has refused to attend, claiming the need for further time to prepare his defense. He faces two counts of ethnic-based genocide for Serb atrocities against Bosnian Muslim and Bosnian Croat civilians during the 1992-95 Bosnian war. The war crimes include the shelling of Sarajevo, the capital of Bosnia and Herzegovina, a four-year siege that cost the lives of some 10,000 civilians, and the slaughter of 8,000 Bosnian Muslim men and boys of Srebrenica in 1995.

Karadzic evaded arrest for a dozen years before his capture in July 2008. Disguised by a bushy white beard and thick glasses, he worked in a private clinic in Belgrade as a practitioner of alternative medicine. In an unsuccessful effort to avoid prosecution, Karadzic claimed that then-U.S. envoy Richard Holbrooke had promised him immunity in 1996 in exchange for leaving politics. Holbrooke has denied any such agreement. The genocides underscore the importance of the doctrine of the responsibility to protect, with its emphasis not only on a sovereign state’s responsibility to protect its citizens, but also the responsibility of the international community to intervene when a state fails to do so. The doctrine exists precisely because of mass atrocities like those in the former Yugoslavia.

The Editors
Show Comments (
4
)
Comments are automatically closed two weeks after an article's initial publication. See our comments policy for more.
Christopher Butler
11 years 11 months ago
This Episcopalian sees lots of problems for the Roman Church in this move.  While it seems doubtful that very many of us will take up the pope on his offer, the ones that do will be very difficult to incorporate, even as a separate rite w/ its own jurisdiction.  The newcomers will agree on issues of women priests and gay clergy, but they have always hired their own priests, elected their own bishops, and had an important enfranchisement in running their parishes.  They'll find it difficult to swallow when they can only pray, pay and obey.
It's unimaginable to me that the new Uniate Anglicans will be permitted to keep their accustomed forms of governance.  It is equally unimaginable that they will give them up.  Benedict may find he's the dog that finally caught the tire.
John Walton
11 years 11 months ago
Hooray for the Anglicans - at least they can sing.
Bill Parks
11 years 11 months ago
Because the Pope acts as head of the church he knows that he must follow the
example of Christ as shown in the New Testment. May I offer the Pope a
suggestion based on the example of our Lord and Savior Jesus Christ: The Pope
should reach out within his church to many qualified married Catholic deacons
and ordain them to the full priesthood in order to alleviate the priest
shortage. It was not necessarily a better development to make the church
priesthood and hierarchy an exclusive single men's club from about 1000 A.D.
onward. This is opposed to Jesus own example which made the beginnings of His
church a married man's place too. Many today want Jesus' church to include
married men as ordained priests. 11 out of 12 of the apostles at the Last Supper
were married. Why does the church let Catholics die without sacraments due to a
priest shortage caused by an artificial requirement not instituted by Jesus. A
man made ordinance to keep church property from being inherited caused celibacy.
Recall that Jesus chose 11 married men out of 12 to be His apostles! With all
due respect - can't the Pope, cardinals and bishops count the apostles? There
were 11 "married" men out of 12 chosen by Jesus (God incarnate) AND NOT 11
"SINGLE" MEN!
david power
11 years 11 months ago

Reading this I did not know wether to laugh or cry. The comments about the Vatican were classic America. First the division into Traditionalists and Progressives and then the "political" part. Me thinks projection! Then the lovingly painted image of such humble US nuns accepting the teaching of the Church on controverted matters. Santi Subito! How good are those nuns to accept the teaching of the Church...Then the clincher at the end "we hope answers will be forthcoming." I can just see the Holy father searching for words to pacify you deluded bunch.The editors need an editor!